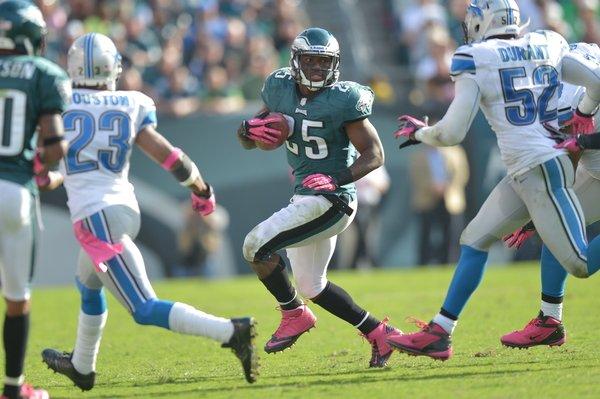 There’s a good chance Sunday’s game will be played under rainfall.  The ball will be wet, the field will be wet, the wind will be blowing and that environment will make it harder to throw the football down the field.  Andy Reid and Marty Mornhinweg must go into this game with an emphasis on calling plays which minimize the risk of turning the ball over.

If the Eagles take care of the football, it will give them a great chance to win this crucial contest and get their season going in the right direction.

The Birds have a turnover prone quarterback and one of the best if not the best running back in the NFL in the person of LeSean McCoy.  It’s also true that they don’t have a good run blocking offensive line, especially with Jason Peters and Jason Kelce sidelined due to injuries.

This current unit has had problem blocking for the stretch running plays which offensive line coach Howard Mudd loves to run. The draw plays which had worked so well in Indianapolis haven’t been successful with Dallas Reynolds, Evan Mathis and Danny Watkins leading the way.   The Eagles guards and center were getting pushed five yards into the backfield by the Detroit Lions defensive tackles when the Birds tried to run the stretch play.

The offensive coaches must figure some running plays which this group can execute.  In the last two games, McCoy hasn’t been able to get back to the line of scrimmage without encountering tacklers.  He averaged only 2.5 yards per carry versus Pittsburgh and Detroit.  That must change.

Right guard Watkins may not play because of an injured right ankle, so rookie Dennis Kelly might get the first start of his career.  It may be a good thing when you consider how Watkins has been playing.  I want to see the Birds use a power running game on the right side in back of Kelly and right tackle Todd Herremans. It’s vital that they find a running play that this offensive line can be successful with in order to keep the Atlanta defensive line guessing by mixing up the run and the pass.

The Falcons defense isn’t very good versus the running game.  They’re 28th in the league when it comes to stopping the run.  Offenses are averaging an eye-popping 143.8 yards per game against Atlanta.  This is a large number when you consider that this team is 6-0 and playing with the lead most of the time.  A team which is trying to come from behind is more likely to be throwing the football, yet they’re averaging over a 140 yards per game and 5.2 yards per carry.

The Eagles need to keep the ball away from the Falcons’ high scoring offense.  I recommend a blending of a short passing game and handing the ball off to McCoy.  The key will be finding some running plays which this offensive line can execute.