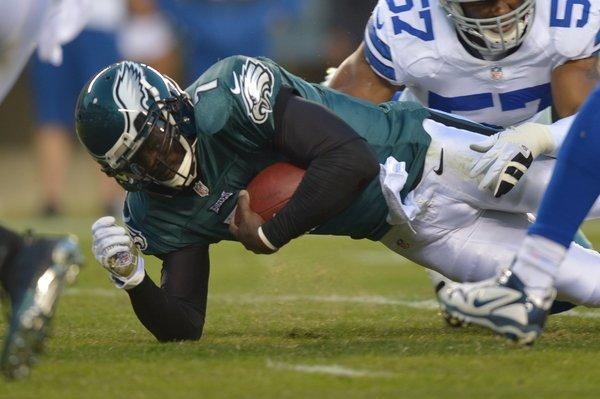 After the team practice, Eagles head athletic trainer Rick Burkholder gave us an in-depth assessment about the status of quarterback Michael Vick today.  It made me think that there’s a very good chance Vick will not only miss this week’s game, but he’s likely to miss the next week’s game as well.

“Right now, he currently has (concussion) symptoms. He’s had symptoms all week since the game. He’s had a headache, which has gotten better during the week. He’s foggy. He’s not very alert right now in terms of he just doesn’t have that energy. He’s tired all the time, he’s slept a lot, and he’s not getting rid of that fatigue. I would consider him heavy eyed. When I talk to him, he’s just not the Michael Vick that I know when he’s healthy. For that reason, our process stays at that phase one that I talked to you guys about last year when I went through it with Michael. He does have symptoms”.

We’ll have to wait and see where this goes from here.   The key quarterback issue for the Birds right now, is how does Nick Foles play tomorrow.  If he plays well and the Eagles win, there will be no rush to get Vick back on the field.  If he plays poorly but the Eagles still find a way to win, the football team will continue to try and get Vick back on the field.  If they lose, it’s done deal and no one will care one way or the other.

With any luck Foles will show if he has the talent to be the Eagles next quarterback. Now is the time to find out. I hope he stays in for the remaining games even if he sucks. If Foles sucks and the Eagles lose then they will get a higher draft pick. One way or another, the Vick days are over. There will be new quarterback next year – if it’s not Foles it will be someone else.

I liked Randall Cunningham and Donovan McNabb when they were here, but I’m ready for a traditional (stand in the pocket, get the ball to the fast guy), quarterback. I’m tired of the quarterback being his own checkdown.

I want to see Foles succeed and progress as a rookie and bonafide franchise QB of the future, even with making mistakes, BUT…. I just as leave see the team lose the rest of their games and get as high a draft slot as possible. Reid/MM, the wide-9, Vick need to go and some of the FO/scouting personnel need demotions or dismissal as well. Bring in a true GM/football guy with smarter drafting. A higher than #10 pick could offer the possibility of trading down for 2 1st rd picks (if necessary) to get some solid O linemen in here and some hitting/tackling D help. Many of our players are overrated and/or soft and simply don’t have the heart to play here.