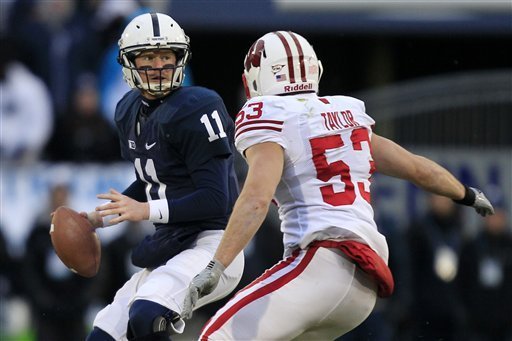 Wisconsin was the first to strike with a 57-yard passing touchdown from quarterback Curt Phillips to running back Melvin Gordon. Penn State was able to answer with a touchdown of their own from running back Zach Zwinak for 3 yards. Wisconsin’s next touchdown, a 17-yard run from running back Montee Ball, would be the last score of the half. All three of these scores came in the first quarter.

Penn State’s offense started to wake up in the third quarter. They still relied on their running game, but were able to be more effective with their passing game than in the first half. They scored twice in the quarter, but only on field goals. One was from 23 yards, and the other from 32 yards.

The defense kept things up on their side of the ball and played even better than they did in the second quarter. Wisconsin was not able to score in the third quarter let alone get across the 50-yard line.

The game’s next touchdown came in the fourth quarter. Penn State decided to go for it on 4th & 6. Senior quarterback Matt McGloin passed to tight end Jesse James who scored the 41-yard touchdown. The Lions then converted their two-point conversion attempt. This would give them their first lead of the game.

Wisconsin looked as if they were going to regain the lead a few drives later. Phillips connected to his receivers for several first downs. Penn State’s defense forced the Badgers to go for it on 4th & 8. Phillips threw again, but was intercepted by Penn State senior safety Jacob Fagnano. Penn State, however, was not able to score on their next drive.

Wisconsin was able to drive down the field on their next drive, and tie the game at 21 with 18 seconds left on the clock. The game would go into overtime.

Penn State would have to rely on their kicker Sam Ficken to win the game. Earlier in the year, Ficken had missed 5 field goals in one game alone. He snuck the ball in from 37 yards.

Wisconsin had to send their kicker Kyle French on the field to send the game into a second overtime. French missed wide to the left from 44 yards to end the game.

This win was the perfect ending to Penn State’s season. This was the season that Penn State was supposed to collapse due to the sanctions that the NCAA gave them this summer. This was the team that was never going to bounce back. These young men proved each of these thoughts wrong.

These players gave the Penn State community hope when everyone turned their backs. The same goes for Bill O’Brien. They helped bring the community back together through their actions both on and off the field.

Yes, Penn State does have a culture, but it’s not completely identical to the “culture” NCAA President Mark Emmert spoke of several months ago. Some of you may disagree, and that’s fine. My experiences at Penn State may have been different than yours.

Penn State finishes their season at 8-4. Due to sanctions against both Penn State and Ohio State, Wisconsin will represent the Leaders Division next week in the Big Ten Championship game.

I have to give kudos to O”Brien and his coaching staff. This season could have been an utter disaster and could have buried this program. He challenged his coaches and players and they responded with pride, dignity and class in the face of great adversity. There are challenges still ahead but I think PSU will make it through because they have a leader who has shown them the way. Congrats to the PSU program.