Eagles Players React To The Release of Jason Babin 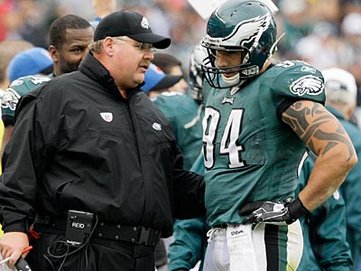 There’s a lot of talk about the release of Jason Babin sending a message.  Why would you wait until the team is 3-8 to send a message?  The season is over and all the players are playing for is their individual careers and futures.  It’s every man for himself now with the Eagles.

That’s my reaction to the release of Babin, now here are his former teammates reacting to his release.

“I’ve been in the league for eight years now and seen people come and go and it’s just business”, Trent Cole said to a group of media members on Wednesday. “There’s nothing you can really say. That’s between him and the franchise and that’s it. We’re going to miss him. He was part of our d-line; we were tight. We’re a close-knit group. He’s a great player. He’s a very aggressive player you want to have on your team. He’s going to find another home.”

“I’m just going to take this opportunity, and I’m about to go hard”, Brandon Graham said regarding the opportunity he will get to play more with Babin gone. “Y’all going to see me this weekend. You’re going to hear from me.”

My question is why didn’t we see you earlier in the season and earlier in your career.  Graham is always talking more than he should.  Show us don’t tell us.

“As young guys, we’re just gonna have to step up,” said Vinny Curry said about Babin’s release.  “I’m just going to work my tail off today and the rest of the week.”
Curry is a young hungry player, who should have been given a chance to make a difference much earlier in the season.  You can bet that Jim Washburn never even considered sitting down one of the starters.
“I’ve learned, as a rookie, that this is a business and things happen like that”, Fletcher Cox said yesterday before the afternoon practice.
Cox has been the Eagles best defensive lineman.

“I guess in a way you kind of expect something to happen”, Mike Patterson said yesterday to the local media. “You could look at it that way if you want to but you just feel like the team is trying to make the best choice for us to win games. That’s the only thing as a player [that] you look at it.”

“It happens” said DeMeco Ryans. “Nothing really surprises me in the league anymore.”

“The one thing that I’ve learned about football is that it is a business”, Nick Foles said in the midst of a circle of reporters. “I love every teammate here, but it’s a business and you just have to go with it. There’s been guys that have been released before and we just have to come together. I talked to Babin earlier and I wished him the best of luck. That’s just part of it and that’s what I’m learning.”

“It’s an interesting situation”, Evan Mathis said during the afternoon media session. “As players we have to trust any kind of situation like that when they’re made by our coaches and management.”

Move the practice team to the active team. Lets start planning for next year now

Yeah…Mathis needs to hit the bricks too. The only thing that annoys me is that the offense/offensive coaches get a slap on the wrist while FO teeth come out consistently on the defense. Nick Foles clearly isn’t ready to start in the NFL, yet nothing’s being done to improve the QB position NOW. The O-Line has played better when dropping back in pass protection instead of launching forward (as rare as it’s called for them to do so) yet Mudd doesn’t seem to have been reprimanded for not moving a to technique that works for pass protection.

Good idea. Send a message when your irrelevant.

This clown ass organization is pathetic.

Why didn’t you send a message after the failure last season?

Send a message to the guy who wanted clay Matthews and thought he was an NFL starting linebacker.

Send a message the personnel guy who scouted Nate Allen but didn’t notice the disruptive force in JPP playing in front of him on that defensive line.

Send a message to the guy who wasted a 2nd round pick on J. Jarrett.

Send a message to the guy who paid DJax like a stud number one receiver but took him off the field on punt returns and by doing so, weakened the special teams along with taking away the greatest opportunity to score on special teams.

Send a message to the guy who thought Kurt Coleman as a scrap player drafted in the 7th round and plugged him as the starter..

Clean house from the Front Office down and bring us in a damn football GM to get NFL football players that represents the blue collar Philly fans.

If you keep Roseman after firing Reid that will tell us you’re incompetent as an owner.

There’s many Football guys out there who can turn this thing around.

Come out of your cocoon in the novacare and be objective.

Thanks Songs, right to the point.

Songs,
I hate to sound like a dead-hrose, but the Eagles already have their next VP of Football Opserations working for them.. His name is Tom Donahoe who they hired as an “Senior Advisor” last Spring.. He is acting in this Role alreaday and cleaning up the Adminsitration Dept’s and firing all of Andy Reids hires and will replace them with his people and then will turn attention to the Football Sde of Things when AR is oficially Terminated which will be Monday 12/31/2012 after their last regular Season game..
Donahoe will handle the Football Side of things (Drafting/Scouting/Players Personnel, and overall Roster Management) while GM Roseman keeps his GM Title but will concentrate on Salary CAp Issues and Contracts

There will be no Jon Gruden, Tony Dungy, Bill Cowher type of ex-Coaches interviewing with the EAgles for this is not DOnahoe’s personality or style..
He will work behind the scenes and hire someone he is comfortable with and have a similar philosophy Football wise with the names I mentioned above..

For the most part, those are some bad choices. Dave Wannstadt has been an AWFUL head coach in the pros and college. Why would I want Russ Grimm, the Cardinals are one of the few teams that have a worse OL than the Eagles. The 49ers can’t run the ball worth a hill of beens, most times they don’t even try, so I don’t want Clements. I’m intrigued a little by Vic Fangio Ray Horton or Brad Seely.
What about Bruce Arians?

sorry, meant that the Packers can’t run the ball at all, not the niners.

Jeff McLane from the Philadelphia Inquirer had the answer to why Jason Babin was released in yesterday’s newspaper. Since Babin was waived previously in his career and continued to get paid while not playing — the Eagles did not have to pay him his remaining 1.64 million contract for the year since it was the second time the player was waived — There was one player on the entire team that could be released and not be paid and Jason Babin was that player —— Jeff Lurie dumped him to keep 1.64 million dollars

Tom Donahoe Dumped him with Andy Reids support to get back as Dipshit
DL Coach Washburn who refused to have the younger DE play enough Snaps.
When Washburn balked about playing Curry, Coach AR and DOnahoe decing to take him out of the mix so now there is no excuse not to play the Younger DE’s (Graham.Hunt & Curry more Snaps)
Can anyone still tell me why Darryl Tapp is on this Roster.. Never understood him making this Team and was another Wasterd Roster SPot all Season like Dion LEwis, Chris Polk, Clay Matthews have been all Year long

basically none of his teamates care about him leaving and neither do i . he sucked, never played the run. never beat double teams, rarely beat one man. he hasnt made one significant play this year. and his hunting buddy has only made one( strip sack of flacco) Man i like cole but when u hit that wall its nothing u can do about it. this guy is shot

It’s hunting Season anyways, so Trent Cole will be tired from his late night drives to Spot Deer.. He’s done this every Season where he fades once the leaves come down.. He should be traded and probably could return a 2nd or 3rd Round Pick while he still is young and has a name out there..

that 2nd or 3rd sounds real good right now.I can go into 2013 with graham, curry, hunt and tapp.i Really just want a playmaking safety, strong or free. Just please cause fumbles and interceptions.

Hey guy not sure if anyone said this already but what about the Penn St. Head coach. I know that if a team wants him they have to pony up something like 9.5 million but I don’t thing it would be a bad idea. That price tag is a little steep, but I think someone may do it.

He told everyone he is staying. I tend to believe him

O’Brien is not leaving Penss State, he just received a nice extension and is able to make his own mark at a storied Program in his own likeness and in his own way. . Why would he want to leave Happy Valley at this early stage of his Head Coaching Career..C’Mon Man,you guys are really reaching ..

off topic….Guys remember when Gonzalez was showing interest in playing for the Eagles?

At that time I was screaming for the Eagles to sign him and the majority of the losers on here including paulman claimed Celek was fine.

We were getting rid of leaders and was not replacing them with players who commands respect in the locker room.

I’ve been calling for the Eagles to draft a fast strong TE for years now since we let Gonzalez go to Atlanta.

Now, look at Atlanta and look at our sorry ass team.

Celek is a cement hand bum who reflects the Andy Reid player.

Cant disagree with you their Songs. I wanted Gonzo here bad too. I was a big Celek fan before this year, but I ignored the drops, but hard to ignore it this year. That and his GD celebration after every first down.

I personally can’t stand Penn State, but I do acknoweldge their History, Tradition that their Football Program has had for 50 Years and as a College Coach, who would not want to be the Coach that brings it back to Prominence regardless of my personal feelings for the University..
See I am able to put aside my personal feelings about teams,players or schools and will continue to call things as I see them and keep things real around here..

To Eagles fans-
Do not hire a current NfL assistant…..you want someone to help build the team to a winner….look at Stanford coach, David Shaw.
He has NFL experience, young and perfect for the NfL