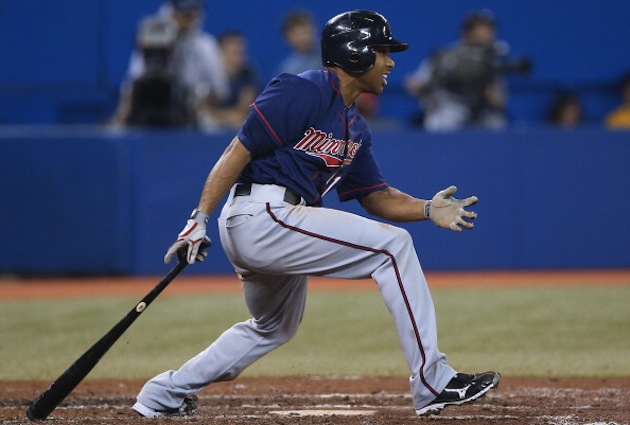 On Thursday afternoon, the Phillies filled one of the holes in their outfield by acquiring centerfielder Ben Revere from the Minnesota Twins in exchange for starting pitcher Vance Worley and Trevor May, one of the organization’s top pitching prospects.

Revere is a speedy outfielder who drawn a lot of comparisons to former Phillie Juan Pierre. The 25-year old can be expected to hit over .300 and steal more than 35 bases, but won’t bring much power to the lineup. He’s yet to hit a single home run in his major league career.

Revere’s on base percentage leaves something to be desired, it was just .333, and he drew only 29 walks in 511 at-bats last season. The good news is that the former Twin has some upside, and has the potential to develop into a better player. He’s a lefthanded hitter, and only struck out 54 times last season.

The other positive to this move is that the Phillies were able to acquire a centerfielder that is not only young and talented with room to improve, they also managed to find a capable starter that is very payroll-friendly; Revere will not even cost the Phils $1 million, leaving them plenty of financial flexibility to pursue other players on the free agent market.

The question with this trade is whether or not the Phillies gave too much to acquire him.

Parting with Trevor May isn’t much of an issue to me. Even though May was one of the team’s better prospects, keep in mind that a prospect was all he was.

May could turn out to be a decent pitcher, but he could also never be heard from again after this week. It’s very difficult for any prospect to make it all the way to the major leagues, and become successful. Even players who are considered “can’t-miss” can easily fail once they get their shot. Remember some people had reservations about trading Kyle Drabek for Roy Halladay a couple of years ago? Since the trade, Drabek struggled to stay in Toronto’s rotation, and has also battled injury problems. Domonic Brown was once considered a top-five prospect in all of baseball, and he’s been unable to lock up a starting job over the past few years with the Phillies.

Trading Vance Worley creates a hole in the Phillies rotation, but its one that can easily be filled. Worley wasn’t going to be counted on to be more than a fourth starter for this team. While he’s a better option than Kyle Kendrick or Tyler Cloyd, the Vanimal wasn’t by any means an untouchable piece.

Ruben Amaro can use some of his financial flexibility to bring in a capable starter to fill the void left by Worley and compete with Kendrick and Cloyd.

The Ben Revere trade seems like a good deal for the Phillies. They had to give up a little of their pitching depth, but they did so to address one of their top needs. They got a player that is young and affordable, and has his best years ahead of him. That’s a much better move than settling for what was on the market and overpaying for aging stars like Michael Bourn and Shane Victorino.

This is just the first shoe to drop for the Phillies, and with the winter meetings in full swing, they’ll be bigger moves made by Ruben Amaro to improve this baseball team.