Eagles Come Back For Victory, As Foles Passes Another Test 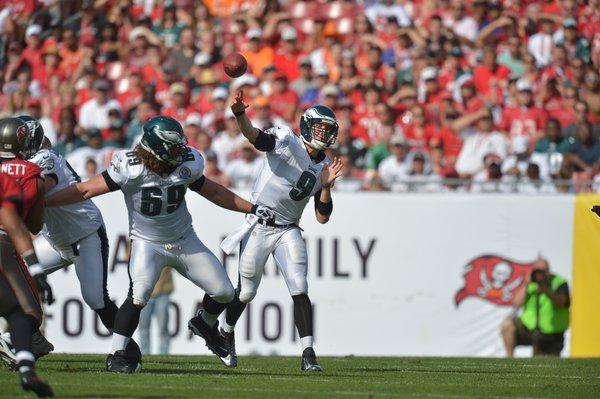 This was an up and down affair between the Eagles and the Bucs, with the Birds winning on the game’s last play.  It was a fun game after a very slow start, with both offenses doing nothing early, then going up and down the field later on.

Rookie quarterback Nick Foles showed tremendous composure with the game on the line in the win over the Tampa Bay Buccaneers.  He was playing against the worst secondary in the NFL, but you credit him with taking advantage of it.

The fact that he told the coaches what play he liked on the final play of the game says it all.  One of his biggest strengths of Foles is that he understands the game and he has a good feel for the game.  The young man is able to walk to the line of scrimmage and grasp what he’s looking at and possibly change the play to a better play.

The touchdown run took forever but he got there.  It wasn’t the only time that Foles used his legs to take advantage of open areas.  He took off for a key first down on the final touchdown drive.  He isn’t going to be scaring anybody with his speed, but he is athletic enough to take advantage of scrambling opportunities.

Foles does a great job of keeping his eyes downfield on scrambles and that helped him create big plays to Jason Avant, Jeremy Maclin and a touchdown throw to Clay Harbor.

I’m not ready to say that Foles is the Eagles answer at the quarterback position, but he has gotten better in each of the last few games. Remember he threw a pass that should have been picked off on the last drive.  He’s been very fortunate about sure interceptions being dropped, so let’s not get ahead of ourselves.  Remember if he’s throwing sure interceptions against the worst secondary in the league will he be able to lead a team against a good pass rush and an excellent secondary.  The jury is still out on the young man.

There are certain things which he has proven to us.

He’s proven that unlike Kevin Kolb he’s got the body to withstand the pounding a quarterback must take in the NFL.  Foles will stand in there with a pass rusher in his face, take the pounding and deliver the football without blinking.

Bryce Brown was shut down by the Bucs defense.  He couldn’t get outside of the Bucs contain because they were attacking him as he went down the line of scrimmage.  Tampa Bay’s secondary does a great job of supporting the defense front on run plays, but they’re awful against the pass.

Brent Celek was knocked out of the game on the second play and it opened up opportunity for Clay Harbor and he took advantage of it.  Harbor has been improving as a receiver and as a blocker behind the scenes all season long.  He consistently got open against the Bucs and he caught the football.  I see a bright future for this young man.

His touchdown was a key play which set up the come back win.  He can beat any linebacker in the league who tries to cover him.  The youngster made a great one-handed catch on another play.  He’s shown he can catch the football despite getting pounded, which is a must for a good tight end.

Jeremy Maclin made the catch to win it all, but he struggled to get open for much of the game.  I will give him credit for stepping up with the game on the line.  He caught 9 catches for 104 yards and a touchdown, despite a slow start.

Jason Avant had one of the best days of his career.  His one handed catch may have been the best catch of 2012 in the NFL.  His catch down the middle on fourth down was a game saver and set up the winning touchdown.  He made 7 catches for 122 yards.

Avant did a nice job on a number of scrambles of heading downfield and getting open for Foles.  It’s not an accident that he and Foles did a good together because both of them understand the passing game.  The veteran wide receiver is a calming influence for a young quarterback and has always been willing to do whatever it took to help the team win.  He’s not a personal stats guy.

The Entire Eagles Defense Shows Up