Phantoms Once Again in the AHL Basement 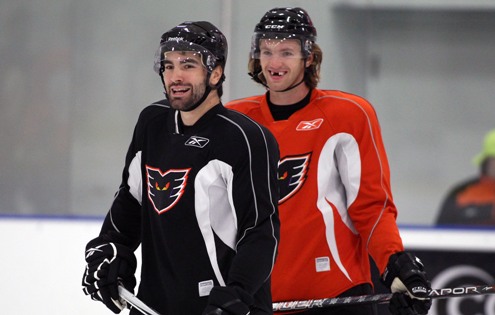 It has become an annual tradition that the Philadelphia Flyers’ prospect depth has ranked last according to Hockeys Future.

The trades in the summer of 2011 that eventually introduced Brayden Schenn and Sean Couturier into the organization helped improve those rankings, but since both have essentially “graduated” to NHL status, neither is really considered a prospect anymore.

Prospect rankings should generally be taken with a grain of salt, as they are based on projected production levels and imperfect scouting reports. Former Adirondack Phantom Stefan Legein, for example, was ranked the 13th best overall North American skater before the 2007 NHL Entry Draft (where he was selected by the Columbus Blue Jackets). The Flyers even weighed in on his abilities in an entry draft feature at the time.

Legein, who now plays for the Manchester Monarchs (the L.A. Kings’ AHL affiliate), has not played a minute in the NHL.

In short, a lot can happen in a limited period of time to see a player’s stock rise or fall dramatically.

Unfortunately for the Flyers, the players under contract that they currently have dressed at the AHL level have not risen above their expectations. As of last night, when Legein’s Monarchs got the better of the Phantoms in a 3-2 win in Glens Falls, the Phantoms officially fell to the worst record in the AHL (10-14-1).

At a glance, the goaltending isn’t the issue. Scott Munroe would easily be the team’s MVP if not for Schenn providing the bulk of the scoring.  Munroe is currently ranked 13th among all AHL goaltenders in save percentage. Cal Heeter is still ironing out his game, but he’s not far off from where he needs to be as the back-up goaltender.

The issues plaguing the Phantoms at the moment are a lack of defensive depth and a questionable use of the offensive depth by head coach Terry Murray.

Marc-Andre Bourdon is currently out “sick,” though the length of time he has been out of the line-up suggests he’s dealing with his third concussion in a year. Erik Gustafsson did not play last night, but prior to that he was the team’s best defenseman.

Among the remaining defensemen, Danny Syvret is having a down year in his production; Brandon Manning is struggling, with just 5 points on the season and an eye-opening -19 in +/-; and Oliver Lauridsen and Cullen Eddy, while steady on the blue-line, have not contributing offensively or stood out as shutdown defensemen.

The jury is still out on Matt Konan, who only began playing in the last two weeks after sitting out with a sports hernia.

On offense, Schenn and Couturier rank 10th and 41st in the AHL in points, respectively.  Their supporting cast, meanwhile, has been a mismatched series of linemates that have not contributed equally.  For as much as the existing talent level can be blamed, Murray shares a lot of faults here as well.

Jason Akeson, recalled from the ECHL about a month ago, should have been in the line-up at the beginning of the season. While not without his faults, shunting the team’s best forward last season did not help the Phantoms get off to a good start. He now has 10 assists in 11 games played.

Matt Ford, who had 29 goals and 59 points in the AHL last season, has been relegated to third and fourth line duty, if he plays at all.  After starting the season on the top line, Murray pulled him after just three games.

Per Michael Cignoli of the Saratogian, Murray’s reasoning for the regular doghousing is, “I don’t think he has the puck enough.”

“I watch games, I watch the video and I don’t see the puck on his stick for long stretches of time. I don’t see that six-, seven-second transporting the puck through the middle of the ice. I don’t see over a period of games or a stretch of games where there’s enough possession time for a player who’s a skill player,” said Murray.

In other words, he has no confidence in Ford.

Assuming that those two should be regular top six forwards, that leaves two winger positions open for the likes of Harry Zolnierczyk, Eric Wellwood, Tye McGinn, and Mike Testwuide as qualified forwards to take up those spots. The remaining forwards on the roster are better suited for third and fourth line duty, and yet that hasn’t been the case under Murray.

Testwuide had not been the model of consistency in his previous two years with the Phantoms, but he still remains one of the more promising members of the team in terms of size and skills. Once touted as “the next Mike Knuble” by the Flyers, he is also regularly doghoused by Murray.

Testwuide scored a beautiful wrister in last night’s loss to the Monarchs. Per Diana Nearhos of the Post Star, prior to the game, he had been scratched in six of the last seven games.

“He took a look, got a play from [defenseman Jeff] Dimmen, walks in, picks his head up and hits the far corner,” Murray said. “It was a great shot, it was a NHL shot. He put a lot behind it and it was nice to see him get that kind of a look.”

There is still time for the Phantoms to turn their season around and rise above the expectations that others have painted for them. It’s going to require that the defense turn their game around, though, and Terry Murray having more confidence in the forwards that have the greatest abilities to lead them out of the gutter.

This Flyers Feanchise gas become completely inept at developing Defensemen and Goalies and us an embarrassment
Who is overseeing the Drafting/Scouting??
Who is responsible of developing young prospects into potential NHL Players
Every year it’s tge same old far age which forces the Big Club to go out and over spends for aging, past their primes type of players
When was the last Good Goalie and Defenseman that that was groomed in their Minor Leauge System.. And you guys think that Ed Snider is such a good Owner where tear after year and decades go by with the same glaring weakness of the Flyers (Goalie and Defensenan)

I have never like Terry Murray as a coach. Ever. I’d like to know who’s responsible for bringing this buy back to the franchise. Is every former Flyers coach GUARANTEED a job in the organization if they end up unemployed at some time in their careers?!?! Loyalty is good – to a point.