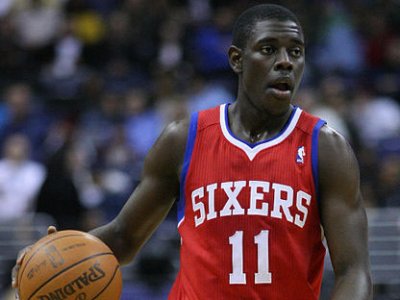 I am telling you right now I refuse to bring up the name of the one they call the “Bowler”. I refuse to say it until he actually plays, if ever. I know that the “Bowler” said if he gets good news on Dec 20th he will likely play.

Whatever..that’s how I feel about that.

I have decided to give a little break down of the season so far. I figured to go with “The Good, The Bad and The Ugly”.  Let’s begin…

In the backcourt,  Jrue makes this team go. It’s as simple as that. Holiday is having a breakout season, and is leading the Sixers in scoring (18.4), assists (8.9), free-throw attempts (79) and minutes. He is also fifth in the NBA in minutes per game (38.5). Without Jrue this team would likely be a lottery team.

After struggling through the first couple of weeks of the season, Evan Turner has finally found that consistency that we all have been looking for. He is actually leading the team in three-point shooting at 46%. Yes, I said that right. As play by play announcer Marc Zumoff would say, “Turnerville’s”.

I love the toughness that Turner and Jrue bring to this team. They are looking like a back-court the Sixers could build around. J-Rich has struggled some of late,but overall he has been solid. The dude still can knock down a jumper.

I am putting Thad here because he doesn’t deserve to be in that front-court mess. You have to love Thad. You know what you are getting out of him every single night. All heart and hustle. Plus, he is averaging a career high at 7.3 rebounds per game. I could write about Thad all day so let me stop right now.

This team barely gets anything from its bench. “Swaggy P” has not had that much “Swag” at all this year. Young has been mostly inconsistent with his play so far. He is averaging 10.3 ppg and is shooting 39% from the field and 34% from down-town.

Dorell Wright teased us in the preseason with his play. He has been a disappointment. He is shooting 33% from the field and is only averaging 6.9 ppg. By the way, the Sixers are a minus 88 when Wright is on the court. Ouch.

Spencer Hawes will have a one decent game every once in awhile.

Kwame is being well, Kwame. He did have one good game though.

Every time rookie Malik Wayns gets into a game he is like screw it, let’s see how many shots I can “jack” in under a minute.He does do a good job of that though.

The Sixers averaged 38.8 ppg last season which ranked them 4th in the league. This year they are ranked 24th in league in bench scoring at 27.0 points a game.

Do you remember that game against Charlotte? I know I do. The Sixers front court (Brown, Lavoy, Hawes) got man-handled by Bismack Biyombo. Who? Exactly.. Lavoy (4.9 rebounds in 22.4 minutes a game) has had his moments. His defense has been solid as well at times. I like Lavoy but he is just not consistent enough. He is a backup to me.

I guess you can say that Kwame (2.9 rebounds in 13 minutes a game) has helped in a game or two. I mean, he did have a nice effect in the Dallas game. He did post 6 points and 8 rebounds in just 16 minutes. I apologies for that last sentence, it’s late as I am writing this. Forgive me. All I ask of the Sixers is to NEVER throw the ball into the post to him. EVER. It’s pretty amazing that the Sixers record is even at .500 with this bench and front-court. You can thank Holiday, Thad and Turner for that..