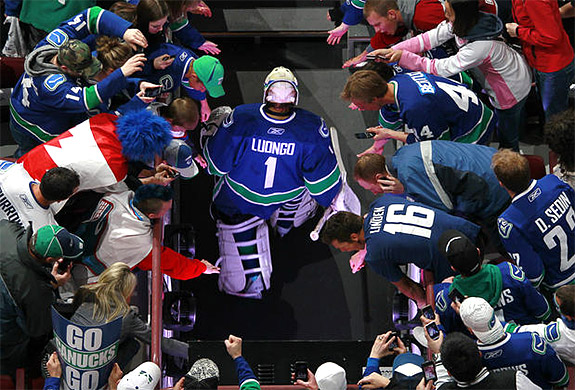 Earlier this morning, former NHL player and TV analyst Enrico Ciccone reported via twitter that the Philadelphia Flyers were interested in Vancouver Canucks goaltender (until next week) Roberto Luongo.

Casual fans and Philadelphia media alike scoffed at the notion; after all, why would the Flyers trade one salary cap headache for another?

By this evening, though, two other reporters- Adrian Dater of the Denver Post and James Duthie of TSN– confirmed that the Flyers have contacted the Canucks and expressed interest in the former Olympic gold medal-winning netminder.

It’s difficult to say just how much one should read into this. Duthie himself clarified, “Doesn’t mean they are going to get him. Doesn’t necessarily mean they’ll make an offer. But they’ve inquired. Could buy out Bryz in June.”

As “@WTPuckingPuck” commented on twitter as well, “You can ‘safely’ attach the Flyers name to any player rumored to be available. It’s up there with death and taxes.”

This is nothing unprecedented for general manager Paul Holmgren. He fields calls regularly on his and other players, and as a manager of professional sports team, one would expect him to.

After this season, Ilya Bryzgalov, 32, will have seven more seasons under contract with a cap hit of $5.67 million.

After this season, Luongo, 33, will have nine more seasons under contract with a cap hit of $5.33 million.

It just doesn’t make much sense to trade existing assets to bring in an even more volatile contract. If anything, Holmgren is just driving up the price for any other bidders in the market for Luongo’s services.

The team known publicly to be most interested in Luongo- the Toronto Maple Leafs- just fired their general manager Brian Burke this afternoon. It doesn’t take much creativity to imagine what franchise-altering decision he and the ownership group disagreed over.