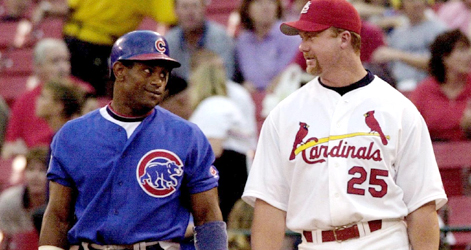 Being a big fan of baseball, I spend most of my time on the Bat Sleeves website looking for the best bats for our family outing, which is why when I came across this incident it only felt right to inform you about it. Do you remember the summer of 1998 when the nation’s sportswriters were fawning over Mark McGuire and Sammy Sosa.  Baseball had been suffering from the strike of 1994-5 and needed something to bring it back.  According to the baseball writers of America, McGuire and Sosa were legitimate American Super Heroes.

I didn’t read about them using any Performance Enhancing Drugs.  You could read almost any paper in the nation or turn on any station and they were telling us what great guys McGuire and Sosa were.

The baseball writers knew that something wasn’t right but they didn’t have the moral or ethical courage to same something.  They were too busy riding in the parade.   I knew something was up and I talked about it on the radio.  They could see the difference in the physiques of McGuire and Sosa, yet they looked the other way.

If they would have jumped on McGuire and Sosa, it would have prevented the “Steroid era” in baseball.  I’m not giving the players a pass because they’re responsible for their actions, but the media is also responsible. The media is supposed to expose the wrongs in sports, if they won’t then who will.

All I could think about was how Penn State and its football program had withheld information from the authorities and from the public.  They had looked the other way as former Nittany Lions defensive coordinator Jerry Sandusky had violated youngsters.  Not voting anybody into the Hall of Fame takes no courage now.  If they wanted to be heroes and protect the game they should have done it then.  Timing is everything on these things.

When the nation’s baseball writers had the chance to protect the game they didn’t, now they want to call themselves protecting the game after the fact.  They did the same thing as Graham Spanier, Tim Curley, Gary Schultz and Joe Paterno, when they knowingly  looked the other way in the summer of 1998.  Very few had the courage to stand up and say something.

Yesterday they refused to vote any of these players of the “Steroid Era”, which the sportswriters made possible, into the baseball Hall of Fame.  To hear some of these baseball writers get up on a soap box and talk about how bad it was for these guys to use steroids is just like listening to Spanier, Curley, Schultz and Paterno talk about how bad Sandusky’s violations of the youngsters were.

The people who had a chance to stand up and demand that it stop, looked the other way, now they want us to pat them on the back.  The baseball writers of America betrayed the game just like the players did.  Just as in Sandusky’s crimes, Spanier, Curley, Schultz and Paterno were all guilty of abetting the violations of the youngsters.

It’s not going to happen this year, but suspected steroid users will be allowed in the Hall of Fame.  Barry Bonds, Rogers Clemens and a number of others will eventually get in when more of the 1998 baseball writers die off.  They didn’t protect the game then and they won’t be able to protect the game in the future.