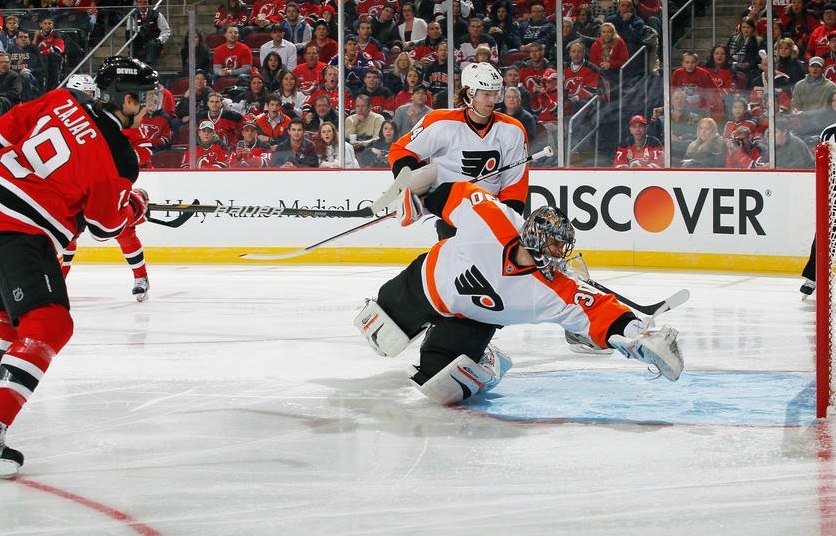 Philadelphia Flyers head coach Peter Laviolette mixed up his forward line and defensive pair combinations ahead of tonight’s game against the New Jersey Devils in an attempt to develop chemistry.

The experiments blew up in his face, as the Devils shut out the Flyers 3-0, who have now advanced their season record to 0-3-0.

Jake Voracek replaced Brayden Schenn on the top line while rookie Tye McGinn, making his NHL debut, reunited with Schenn from their time together as Phantoms.  Rookie Scott Laughton and Max Talbot slid down to the fourth line with Eric Wellwood.

It’s not that the offense “wasn’t there.” The Flyers were consistently successful with entering and maintaining pressure in the offensive zone. They just couldn’t generate anything outside of the perimeter, so Brodeur was never challenged (unless you count when Wayne Simmonds cross-checked him in the crease).

The Flyers outshot the Devils 9-3 in the first period and finished the game with 40 shots on Martin Brodeur (including 16 blocked shots).

Brayden Coburn swapped Nicklas Grossmann with Andrej Meszaros while Grossmann paired with Bruno Gervais, but the changes failed to cultivate anything fruitful at either end of the ice.

The powerplay, which had looked adequate with the first unit in the first two games, couldn’t capitalize on any of their six chances during the game, have now gone 1-15 over three games.

A shorthanded attempt by Ilya Kovalchuk after a botched pass from the point also resulted in a penalty shot, effectively making the record (-1)-6.

The penalty kill looked much improved, especially considering the Flyers put themselves in two 5-on-3 situations during the game.

The Devils did score a fluky powerplay goal late in the first period that bounced off Ruslan Fedotenko’s skate and re-directed in, but that’s a difficult play to prepare for. Earlier in the play, Devils forward David Clarkson knocked goaltender Ilya Bryzgalov’s stick out of his hand. Bryz tried to grab it back quickly, but then missed the puck being thrown from behind the net before bouncing off of Feds’ skate.

I don’t want to be an apologist for Bryzgalov all season, but once again, the score didn’t reflect how well he played in the game, nor would it have made a difference if he held the Devils to just one goal. If the Flyers can’t score, they’re going to lose regardless.

There’s a danger right now that the team can lose confidence if they can’t find any success to rally around. A number of players looked either disinterested or undisciplined in the third period, and the deeper the hole they dig for themselves now, the higher the climb will be out.

The next opportunity to “right the ship” will be on Thursday against the New York Rangers. The blueshirts swept the season series with the Flyers in 2012, but have gotten off to an 0-2 start themselves.  They will be playing their second of back-to-back games at the Wells Fargo Center, which provides some advantage to the Flyers.