Safety Jonathan Cyprien Could Be An Answer At Safety For Eagles 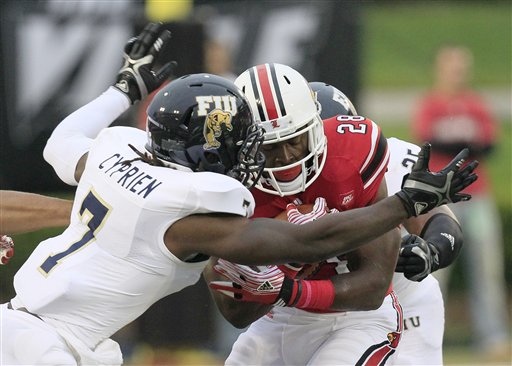 It seemed that last week after each Senior Bowl practice, the Eagles were measuring every safety who showed up.  They were getting every measurement known to man on these guys.  They had good reason to be checking them out.  The Birds are in desperate need of help at the position and it’s become an extremely important position because of the way NFL offenses are forcing matchups.

The safeties have to be good football players to even line at the position and do a decent job, nowadays in the NFL.  Let’s take a quick look at the tasks the safeties will have to accomplish next weekend at the Super Bowl.

They will be asked to tackle powerful running backs Frank Gore and Ray Rice out in the open field.

They will be assigned to cover tight end Vernon Davis one-on-one, who runs a 4.38 forty yard dash and stand 6’3″ and weighs 250 pounds.  Their job will be to cover the quick-footed Ravens tight end Dennis Pitta one-on-one in the red zone.

They’ll get caught running deep with speedsters Randy Moss, Torrey Smith, Jacoby Jones and Michael Crabtree.  The safeties will be required to run with these guys then outjump them to knock the ball down.

Safeties are also asked to direct the secondary with their calls.  The safeties must know the coverages and the favorite routes of the other teams receivers like the back of their hands.

Eagles GM Howie Roseman has said that it’s very difficult to evaluate and predict which college safeties will succeed at the next level.

I was pleased to see that after one of the workouts, the Eagles had about four of their personnel circling young safety, Jonathan Cyprien from Florida International, who had been turning heads during the workouts.  This young man has some special qualities and his stock is rising rapidly.

Cyprien, was invited to the Senior Bowl at the last minute, but he’s taken advantage of the opportunity and made a name for himself during the week.  He plays with the type of enthusiasm and love for the sport that you like to see.   The Eagles need these types of players on the roster to change the culture on the defensive side of the ball.

Cyprien doesn’t play with any fear.  Through the week, he showed that he’s capable of doing anything you need at the safety position in the NFL and that says a lot.

This young man is a hitter.  He attacks the line of scrimmage on running plays with an abruptness that you like to see from a safety, but he’s also a good tackler.  He can come up and lay some wood on ball carriers. Cyprien would immediately be a drastic improvement for the Birds as a run supporter.

He also is comfortable getting up in the face of running backs and tight ends in man-to-man coverage.  He plays an aggressive style.

I like the way he reads the eyes of the quarterback when playing the deep half or deep third in zone coverages.  He gets a great get off when reading the quarterbacks and he will attack the ball at its highest point.

“I watched him over the summer based off last year,” Senior Bowl executive director and former NFL scout Phil Savage said to. “I loved his tackling, his explosiveness. He just had a football temperament that jumped off the tape. We kind of waited and let some of the other people go in and check him out. I had a friend from another team go in and check him out late in the year and I told him to just text me, thumbs up or thumbs down. He texted me ‘Thumbs way up.’

Cyprien was supposed to go late in the draft, but he used last week in Mobile to prove that he deserves to go much higher.  I would have no problem with the Eagles taking this young man in the second round.

“I think his instinctivness and his reactions, an ability to just want to go to the ball. It’s almost kind of a natural thing for him. And if he can run fast enough at the Combine for people to say, ‘Hey, his instincts will overcome any deficiency in speed that he might have.’ There are some scouts now, after this week, who already say he can run. That’s one of the final blanks he’ll have to fill in, but overall he’s been terrific here this week.”

Holiday Is The Sixers’ Silver Lining