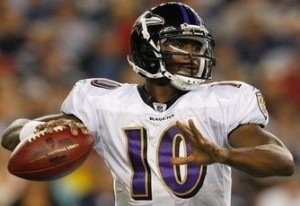 After the Eagles hired Chip Kelly, there was a great deal of speculation that the team could pursue quarterback Dennis Dixon, who played for Kelly at Oregon.

According to Geoff Mosher of CSNPhilly.com, the Eagles are in contract discussions with Dixon. Although the free agency period is still over a month away, Dixon is free to sign with any team because he’s currently just a member of the Ravens practice squad and not part of the 53-man roster.

Dixon would be brought in to compete for the starting job, and would have a leg up on Nick Foles because of his familiarity with Kelly’s offense.

It seems like a sure-bet that Dixon will be an Eagle before long. The Eagles are the only team in the league that has enough interest in Dixon to immediately add him to their roster, let alone give him an opportunity to start. Why wouldn’t a guy struggling to even make an NFL roster not jump at such an opportunity?