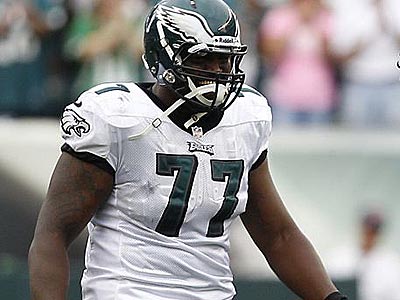 One of the biggest free agent busts of the last couple of seasons has been shown the door. On Wednesday afternoon, the Philadelphia Eagles announced that they have released offensive lineman Demetress Bell.

The Eagles are taking their time deciding the futures of guys like Michael Vick and Nnamdi Asomugha, but they wasted no time in ridding themselves of Bell and his pending $8.5 million bonus.

Signed to fill the void left by an injured Jason Peters, Bell was a complete disaster in his only season with the Eagles.

Bell appeared in just nine games, and started only five of them. The team didn’t expect him to play at Peters’ level, but they did expect the former Buffalo Bill to play like a respectable starting offensive lineman. He wasn’t even able to hold the starting job through training camp, losing his position to another guy that couldn’t play, King Dunlap.

Eagles Decision On Nnamdi And DRC Should Send A Message

Great move. Now sign Gosder Cherilus who is an UFA Right Tackle. Move Herremans back to Guard and O line is good again as long as Peters is back to full strength. Draft Travis Kelce who is a stud blocking and pass catching TE from the Cincinatti Bearcats. Also Jason;s brother.

No he is not a stud, and Cherilus is AVERAGE AT BEST.

I would rather have Phil LoDholt from the Vikings as a Free-Agent OT
Healthy, durable and a solid player who won’t cost the big $$$
That Jake Long and Ryan Clady will command

I think the birds go OLine in the first. Fisher or Jockel

In other news – The 49ers blocked the Saints from interviewing secondary coach Ed Donatell for their defensive coordinator job.

This is no surprise to me I expected a few more cuts than Bell, but we shall see.

If they go Oline, don’t overlook Chance Warmack who might be the most talented player in the draft at his position. I don’t care what his position is, in a draft like this where there are so many question marks about basically everybody this guy is as a sure thing you can get. And honestly I wouldn’t be mad because all I am looking for at pick 4 is superior talent. Not a question mark. We have holes everywhere, this will take years to fix. Just give me blue-chip talent and thats what this guy is.

And glad to see Bell get released. What a bum who stole millions. Release all of them

Glad to hear/read about
Now keep the chopping block going with Vick, Asmo, Patterson,Matthews, Coleman next on the chopping bloc
Then look to trade C Jenkins, T Cole, Herremans, for Draft Picks
And do not offer Contracts to Free agents Dunlap, Landri, Jordan
& DRC

Eagles should bring in DT Chris Canty who was released today by the Giants
At 6-5 320lbs, he would be a good rotational DT to add and did play NT when with the Cowboys a few years ago and would be an upgrade over Antonio Dixon in my opinion and he’s a 8 year Vet and only 30 and probably has a good 2 years left

I wouldn’t be mad if we signed Canty, who will probably want some payback against Giants, could maybe give us inside info and would know the division pretty well. Also, as someone mentioned earlier get Paul Kruger in here.

Chris Canty is on the wrong side of 30. Forget him. Eagles are rebuilding.

If Eagles go to a 3-4 and let’s say Draft DT Star Loyulelie with first Pick and move Fletcher Cox at DE, then Canty could be a nice back up
And Canty just turned 30 is still has 2 solid years left to pkay and contribute as a back-up and has experience at NT in a 3-4 from his Cowboy Days

Just saw a bit of news on PFT that we have 23 million in cap space from this year that we can roll over. So we are not over the cap as some has suggested. Plus if we keep dumping players like D. Bell, we will have even more. GO EAGLES!!!!!!!!!!

The secondary is so bad that if a Dawkins-like Milliner is available at #4, I get him. Passing league so we need immediate can’t-miss help in secondary. Don’t know if there are any others like him in 2nd round, but the D must be rebuilt for 3-4 as well as replacing bad culture guys. It’s easier to fix the O line in latter rounds of draft, but so much is useless back in secondary that at least 2-3 of them must go.
I love Joeckel and Fisher but I trust Kelly to draft what he feels he can work with in first year. Roseman HAS to work with Kelly or his butt will be toast. I never trusted Reid-Banner combo to get right guys in here. Go Eagles!

And there was a very good reason not to trust them they almost never got the right guys here.

Your right IGGY. I feel that Kelly will have a huge influence when it comes to decision making in this years draft. I just hope and pray that “Pee Wee Herman” Roseman doesn’t screw things up with the draft.

One stiff down, many more to go! An extra $8.5M in the pocket, for FA’s. Goodbye stiff, you stole $$$$, now go ask your illegitimate Daddy, Mailman to Western Union you some $$$$!

Bell was the worst FA signing in Eagle history but only the 2nd worst signing of the 2012 off season, next to extended Howie Roseman’s GM contract for 5 more years