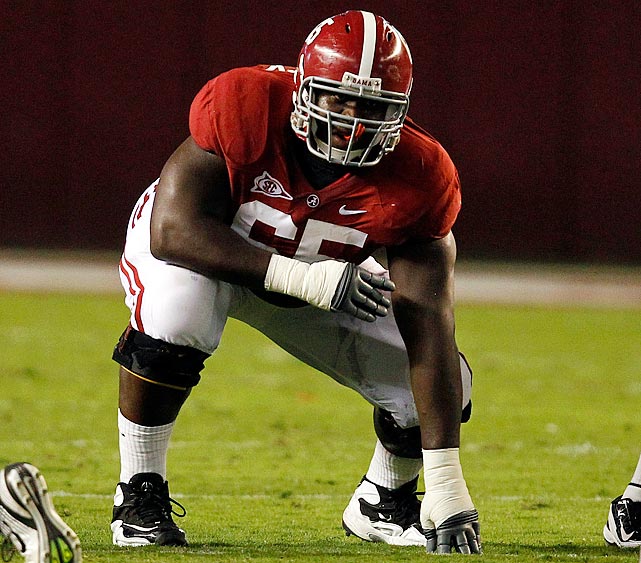 “People will tell me I’m crazy, that a guard can’t go No. 1,” Mayock explained.  “I think he’s the best player in the draft, so I would argue that.”

Warmack might be a good fit here in Philadelphia if Chip Kelly is seriously committed to his running game, which it seems like he is.  Could imagine Warmack lining up on the same line with Jason Peters, Jason Kelce and Todd Herremans with two dynamic backs behind them, LeSean McCoy and Bryce Brown?

You can be sure that Eagles new offensive line coach Jeff Stoutland, who coached Warmack at Bama would love to have the big fella on the Eagles offensive line.

I got the chance to see Fisher dominate people at the Senior Bowl.  He’s got great technique and discipline, along with the size, strength and speed of a top pick.

Mayock: Eagles Should Be Able to Get Their Safety In 2nd or 3rd Round

I said weeks ago that I wouldn’t be mad or surprised if Warmack was our pick at 4, and that was before we brought his Oline coach here. I said Warmack is probably the best player at his position in the entire draft, better than LJ. People called me crazy on here because how could you take a guard with pick 4? Well I guess Mayock thinks like me…Why reach for a player at 4 who has question marks like Jones, Star, Milliner? WHy not just take the best player and actually rebuild this franchise right, if Warmack is available at 4 he will be the best player.
And it happens to be a pretty big need for us as well…I sure as hell don’t want to see Watkins anymore.
I just want a blue chip stud player if we stay at 4. We can’t fuck this up

Yes you did Pheags.. Good Call and I agree with you..
This is how you end up with Pro-Bowlers on your Roster..
Draft the Best Player availalbe

Todd Herremans’ G-Man.. Have you finished your COffe..
Herremans has been very spotty at best the last 2 Seasons..
What the Tape and he does not have the foot speed any longer to play OT..
He has given up a lot of Sacks or led to many QB scrambles since being moved out to Tackle
Maybe at Guard he’s good but the Eagles need a RT more than they need a Guard with their early pick
I like OT Eric Fisher at #4 who can step in from Day 1 and be the Starting RT and then shift over to LT when Peter’s days are done
He’s a tenacious and has a mean streak like Jon Runyan did , but is a whole lot more Athletic that Runyan ever was. OT Fisher has Pro-Bowl Potential at a Premimum Position ..

I can not agree with you more.I believe kc will pick joekel, and fisher is right there with him as far as being a future pro bowl player. ots also tend to last longer career wise, so if he plays 12 years and makes the pro bowl often at a prime position [qb,lt ] thats a home run.It also makes the oline very good as a unit.You can than work on the defense with the rest of the draft and f/a .

good call on herremans shoulda never been moved from LG.. Im also in the market for an NFL center…. Im not sold on Kelce… too light in the ass to get movement in short yardage.. to be honest, 2 yrs ago Mike Mcglynn played center better than Kelce. Jake Long in FA isn’t a bad move @ RT

Paulman, look at who the QB those past 2 seasons. One of the worst guys in the league when it comes to holding the ball or not being able to read a defense at the LOS. Furthermore, just take a look around the league. You can pretty much find holes in everyones line except maybe 2 or 3 at most. It just is what it is…you are not going to have 5 studs across the LOS. Its just unreasonable to be that picky and want studs at every position. If Herremans was released he would have a number of teams calling for his services, same goes for Mathis and Kelce.

Now Watkins just flat out sucks. Useless. Can’t ague against that. I’m sure the Philadelphia fire department would come calling tho.

Pheags you are off the chain…..HAHAHAHA!!!!, BUT YOU ARE RIGHT!!

Herremans is not an NFL OT.. Watch the tape and the games.. he is serviceqable in pinch, but not an everydown OT in my opinion any longer
He’s has foot, ankle, leg, knee, shoulder issues.. I think it’s best to move/trade him for a 5th Rounder or Package him with another Player before his body breaks down completely..

agree agai at least thru the 1st 8

KC only takes Joeckel IF they do not have a QB in place before the draft.

(which is kinda funny that the Eagles just might double screw themselves if they trade Foles to KC. Firstly, they’ll be trading away the best QB on their roster – who admitedly doesn’t fit – and secondly they’d then lose Joeckel)

At this point either Fisher or Joeckel seem like solid picks at 4. I think its the only pick of value at the spot, and for some of the reasons Joesports mentions above. Importance and longevity. A good/great OT is an absolute necessity and can usually play 10/12 years. That’s good value.

In fact, I personally believe the only positions any team should ever take in the top 5 are QB and OT. if stretched to top 10 picks, you can add in CBs and mayby DEs…..again, this is because I put a lot of importance on career longevity, and statistically, these positions have longer careers than the LBs, RBs, Safities of the world which I would avoid like the plague in the top 10…WRs too because they’re a dime a dozen.

The wrench – Millner. If Eagles part ways with both DRC and Nnamdi, then Milner will be very enticing to the Eagles at #4.

Again, I understand many people’s reluctance on that player (Paulman has expressed concerns), but like OT, CBs can often enjoy long careers. There will be a big whole on one side of the Eagles defensive backfield soon, and I could easily see the Eagles sdelecting Milner (not my first choice, but I could see it)

Can’t believe I wrote “whole” instead of “hole”

Vinnie, so glad someone gets it.

I think the eagles however must trade down. If they can pick up an extra second an/ or 3rd rounder they need far too much right now to pick one guy that may not even be that much better than a guy 10 picks later. You may be able to move down and come away with a S, a CB, and an OL in the first 2 rounds

I agree….If one of the 2 OTs is there, my first choice would be to take one, but if not, trading down a couple spots isn’t a bad idea…..though I would be reluctant to trade below where Milner would be available. Perhaps down 2 or 3 spots.

I still think its amusing the Eagles’ first pick will be completely predicated on what Andy Reid does in KC.

We wouldn’t be missing anything Vinnie because Millner, is not all that. You can get players in the 2nd, or 3rd rounds that will have better careers than him.

Maybe a nice package to the Rams, for their 2 first rounders, in addition to our #4 pick, that we are keeping, would allow us to move down a few more spots to pick up the extra draft picks that we need.

I don’t want to see Dunlap, Kelly or Bell any more at OT but if Randall McDaniel, Will Shields or Larry Allen is available and sitting there at #4 — take him
Welcome aboard Chance Warmack

No Thanks on Warmack that high. I can get the same or better from drafting DJ Fluker, and Larry Warford, in the 2nd round…….No way should anybody draft a Guard that high E0S.

It’s hysterical to me, that all of the nitwits in this city, & in the media, are taking for granted Peters heath status & have Peters penciled in as starter. He tore his Achilles twice, is 31 & is over 350 lbs! Are you serious? USE YOUR FREAKING BRAINS! Dude is one wrong move away from retirement! Give it a rest already! This entire line needs to be rebuilt. It’s arguably as bad as the secondary!!!!

I believe the Eagles will Select OT Eric Fisher even if Joeckel is on the Board at #4 (which is very unlikley) I think new OL Coach will love Fisher’s tenacity and
physcial style of play where as Joeckel is more of a tactician and relys on athleticism and techniques.. I really like this Fisher kid