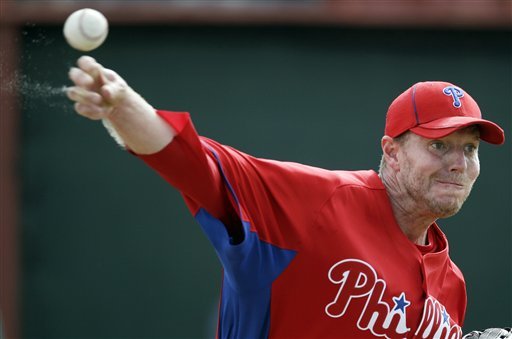 One of the keys to the Phillies season will be the arm of Roy Halladay.  Is he still an ace or is he a star on his way down?  It was reported a year ago at spring training that his fastball and other hard stuff didn’t have the zip on it, which he had been known for throughout his career.  He went on to have a very disappointing season before shutting things down due to arm trouble.

During the offseason there was plenty of talk that Halladay would have to change his style of pitching because he couldn’t throw his hard and heavy stuff down in the strike zone.  Maybe the critics spoke too soon or maybe the star pitcher will be unable to throw his hard stuff later in the season.  Right now, Phillies hitters told Ryan Lawrence of Philly.com that they’re seeing the old Roy.

“He looked great. He looked like Roy Halladay,” said new Phillie 3rd baseman Michael Young “That was the Roy Halladay I remember seeing all those years in the American League. Everything was down in the zone; it had some zip; it was coming out of his hand really nice. I thought he looked great.”

“He looked good,” second baseman Chase Utley told Lawrence. “He had a little life on his fastball – I know it’s the first time – but it’s always good to see a little extra life on the end of his fastball. It was good. It was crisp. He had a little giddy-up at the end. He threw some cutters, some changeups. Located them pretty well. I imagine he’s pretty happy with how it went.”

“Doc was fine, Doc was fine,” Phillies pitching coach Rich Dubee told Lawrence. “Overall, I thought it was a good day of BP today. I thought most of the guys threw pretty well, as far as being in the strike zone, command, that stuff.”

Mayock: Eagles Should Be Able to Get Their Safety In 2nd or 3rd Round

Howie Roseman And Eagles Want To Avoid Overemphasizing The Combine