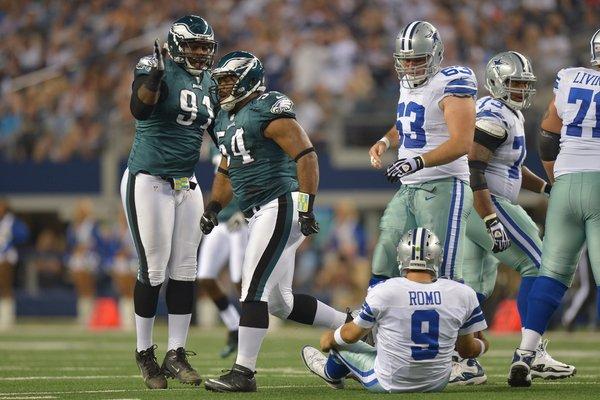 The Eagles feel they already have some of the personnel needed to play defensive coordinator Bill Davis’ hybrid 3-4 defense.  Team GM Howie Roseman spoke to a number of local media members, who had traveled Indianapolis and gave them a summation of what he thought about some of the team’s current defensive personnel.   Here are some of comments according to PhiladelphiaEagles.com.

Roseman had this to say about last year’s first round pick defensive tackle Fletcher Cox.

“He’s got an incredible skill set and he does all of those things well. I think you’re looking for a big jump from him from year one to year two, a young guy, a 21-year-old.”

Cox must be a dominating force in this hybrid defense the Birds will be playing.  Think about the havoc which Haloti Ngata causes when teams try to block him in the Baltimore Ravens defense.  That’s what Cox must produce.  He’s got to stay healthy because this kid does play hard when he’s out there.

Roseman sees Antonio Dixon as the Birds answer at the nose tackle position.

The truth of the matter is that the Birds aren’t going to be playing a pure 3-4 defense.  It’s going to be a hybrid 4-3 or 3-4, so Dixon won’t have to really play nose tackle.  He wouldn’t be a good pure nose tackle, but he can do a good job lining on the shoulder of the center.  They would need a bigger guy to play the pure nose tackle position.

Dixon needs to gain back some of that weight he lost, while Jim Washburn tried to make him a wide nine defensive tackle.

“I think when he came out there was a lot of discussion about him being an outside linebacker and him being able to play on his feet”, . I think he can do that. He can rush the passer. He can hold the edge. He can play in space. I think that’s a transition Brandon can do. Wherever we go, I think Brandon is going to be a piece of that.”

I agree with Roseman.  Graham can thrive in this position because he’ll only be dropping into coverage about 5% to 10% of the time.  He’ll be singled blocked by the offensive tackle, so he must refused to be handled by one guy.  Terrell Suggs and Paul Kruger play this spot in Baltimore.

“Trent’s the same way (as Graham). You look at outside linebackers, Trent has the skill set that a lot of those guys have.”

I’m not so sure he will be as effective in pass coverage as Graham.  Remember Cole has added about 20 to 30 pounds since he came into the league.  He would have been ideal for this scheme when he came out of University of Cincinnati, years ago.

Chip Kelly Speaks Well Of Foles And Ryans, But Not Asomugha

In other news my coffee tastes sooo good.

Roseman also predicted last year removing Asante and his desire to play zone and replacing him with DRC, 2 like press Cover corners would improve the whole secondary & defense LOL

abracadabra ta da
Roseman made DE into OLB
graham had durability issues at DE maybe he can stay healthy this year, maybe

I don’t care what anybody says…He’s gonna screw this whole thing up, and we will be in full rebuild for the next 4 years.

Trent Cole, and Brandon Graham will be terrible with this new position. They’re not fast to the ball, they’re not sure tacklers. Howie is dreaming. GMCliff would move on from the same old results every year. Just Dumb.

Cliff this is going to be terrible, I have 0 confidence in this guy. You need at least 5 new pieces on this defense and that’s being kind. We are looking at a year of 38-31 football games. That’s only if the offense shows up. The entire secondary needs to be replaced what film are these guys watching?

hahah screw what up? if the Eagles were a top defense for the last 3 years, then I could understand that comment…But that has not been reality. Graham will be fine. Trent Cole was a sure tackler before the wide 9. I question Trent Cole at this point in his career for athletic reasons, but as I’ve stated in the past that wide 9 impacted Trent’s game tremendously…less tackles every year the wide 9 was in town was the result for Cole. Now having him drop back in coverage may be asking a bit much.

Being a Top Defense means nothing if you don’t get wins. New England statistically is one of the worst defenses, but they compensate for that with a competent coaching staff, and roster, which the Eagles don’t have, and won’t have with Howie at the wheel.

With all due respect, statistics don’t mean crap, and he is going to screw things up.

Dixon Cox Cole Graham are the def 4 on the D Line that I would want back. Would like to see Curry on the field in 2013 too…

Real, what has Cole done, to warrant bringing back? 2.5 sacks, Houdini every year, overrated, overpaid, gonna be 31, & switching to a DF, he hasn’t played in 8-9 years! SEE YA!

In regards to Cole, I blame the wide 9 for his production this past 2 seasons…Coles total tackle numbers went down by 20 from 2010 season… He had 11 sacks in 2011 and had 20 less tackles from the previous season, 2010. There is a reason for the coaching change especially regards to the defense. With a different defensive scheme/system Cole will be more productive. My decision on Cole is based on how his numbers declined with the wide 9 (not too mention multiple DC’s in 3 seasons) and the fact that I believe Cole will be productive where he is not limited to just getting after the QB.

And you think his decline in production has nothing to do with his declining skill level? Even before the wide nine he was overachieving. He was drafted in the 5th Round, as a Linebacker, but he couldn’t play in coverage, so he was converted to a DE. But, you think he will excel in this new defensive scheme?

This is where I leave it alone, and let you see my point through his play. Graham will stink too. Like I said before Real, you need to see it to believe it. So lets wait, and see……

Realtalk, Andy Reid brought these players here. He built this disaster. Thats why we wanted his ass on a platter like you suggest. And his personal handpicking of these guys that cant play makes him deserve every bit of that firing. Why would that be baffling to you…Its completely logical, he did a terrible job as a coach by bringing these losers in here. Which is why he is gone AND all those scrubs should be gone as well.

What? the blame is on Roseman for bringing these players in…to hear some of these guys tell it…Roseman is also telling the current coach of who should play and who should not. You can blame everyone, but you can’t fire everyone and expect to be competitive. My point was this Reid is gone, thats the road that was chosen. As far as players that road is still being explored, you can’t replace everyone and expect to get stronger. There is no way no how. The coach is gone, maybe a new philosophy/system will benefit some of these players……

Yea, how can he screw one of the worst defenses in the league up? There’s no where to go but up, lmao.

We need a LB that can cover…. We don’t have any the TE’s in this league have been killing us…

How about the Giants TE Bear Pascoe… Ooh that’s right, he torched the Eagles too… Nevermind..

His comments, that ” There’s no question, that Dixon is a NT (In which he never played) & Coles ability to be a ROLB, shows just how cluelessly delusional, this inept, weasel, Dick puppet, this @$$clown is!!!!

The only fits & players that should come back, for the switch, are Cox, Jenkins, Curry?, Hunt, Kendricks, Ryans, & Boykin. We need an entire Secondary, another ROLB, a do it all OLB, 2 NT’s, & a young DE & ILB! Don’t sound like too much to me!

I would still love to know how they can look at the films of last year and speak highly of anything. I know coach speak and we are getting a bunch of it right now. I mean can Howie really get away with blaming everything on the last coaching staff?

True indeed BigL…he should not get away with blaming everything on the last coaching staff, as everyone should share the blame, coaches and players…unless of course this new coaching staff improves this team with the same personnel for the most part.

Roseman can’t say… “Uh oh…we’re fucked, we have to replace 3/4 of our defensive players”. He has to say what he is saying… Because it is unlikely that we could replace the whole secondary and half the front line in one off-season.

We just have to hope that people like Kelly and Davis, and Gamble know what these players can, and can’t do.

Better get ready for some lean years boys. In the words of Tom Waits – “It’s woe-begotten bad times now”

Last years draft class: Kendricks, Cox, Curry, < all are better suited for a 4-3. If the Eagles go 3-4 in any capacity you are basically throwing that entire draft class away.

There is a difference in “Making the switch” and being able to play well in it.

Agreed Dcar, the only reason I have hope this year for the draft is gamble. If he has the majority of the input, with his track record. We should be fine but we shall see.

I’ve stated for over a Year now, that GM Roseman doesn’t know what he’s doing and is unfit to be a GM of a successful NFL Franchise that aspires to win a Championship. I am excited about the possibilities of what HC Kelly and his new Staff can make, but bottom line, it’s about Drafting, and Roster Management in my book, and until GMmRoseman proves to me and many other fans that he can excel in these areas, i rezerve my judgement on how good and comietitive the Eagles can be moving forward and do far this off-season, I am not impressed to say the least ..

We could have the best front office in the NFL and couldn’t turnover the roster in one year.

We better get a good nose tackle and at least one 3-4 linebacker. Don’t sell Patterson short in this defense. He has done more two gaping than the others.