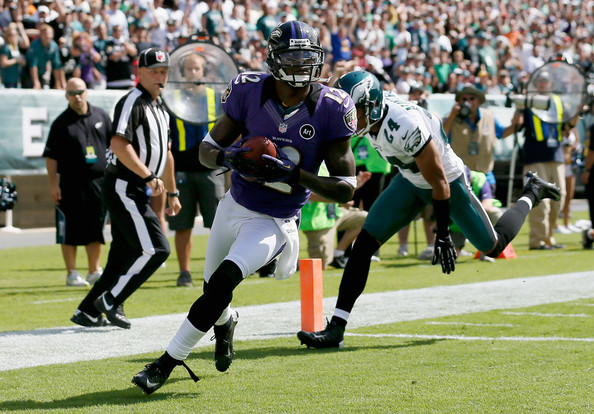 Nobody was surprised, but I still can’t help but shake my head as the Eagles say good-bye to Nnamdi Asomugha after only two years.  He was considered the number one free agent signing a couple of years ago, but nothing went right on the field for Asomugha when he was in an Eagles uniform.

He was awful in his coverage, in his tackling and with his teammates.  He seemed to be disinterested in football.

“Coach Kelly and I each had a chance to speak with Nnamdi earlier and he took the news with a lot of class,” said Eagles general manager Howie Roseman. “We expected nothing less than that from him. He has been a true pro on and off the field for this organization and our community and we wish him all the best as he continues his NFL career. We spoke to his representatives at the Combine about his future status with the team and wanted to take time to analyze and make a decision. In the end, Coach and I both felt we needed to move in a different direction at the cornerback position for 2013 and beyond.”

Asomugha, who is a 10-year NFL veteran has never played on a winning team.  With used to think that was a coincidence.

Asante says “I told you so”

Woo Hoo and about damn time.. Why this wasn’t done a month ago is beyone me.. All it did was send a bad indecisive message to the other Veteran Players and or Potential Free-Agents .. A simple Meeting handing him his $4 Million Bonus (Per Contract) and then tell him sorry things didn;t work out, and that your free to make your own deal and best wishes.. What’s so diddcult about doing this instead of dragging things out.. Putting out stories about having lunch in his car, attending social and charity events, etc,etc… He just is not a very good Football Player any longer, plain and simple… Tim e for him and the Team to move on, people get this but this bs going around and around serves the Team and Front Office poorly ..

You mean the Biggest Free-Agent Bust in NFL History…

That would be Haynesworth

I hav eto agree with you DAggolden
At least Asmo made it thru 2 Summer Camps and played 30 Games unlike Fatso Haynesworth… I still can’t believe many Eagles Fans wanted the Eagles to pursue that tub of shit because DL Coach Washburn was Hired.. A bunch of Smart Fans in Philly I tell you..

Good one Dag,
Don’t tell Jon Hart, for he still thinks Bynum is one of the Top Players
in the entrie NBA.. ..

See ya later you over priced piece of crap! God I wish your sorry ass would have choosing the Cowboys instead of the Eagles in free agency. But hey let’s hope he now signs with the Cowboys. Let them deal with his terrible tackling. F**king pussy!

The defense will stay soft long as Nate Allen is still on this roster. Period!

When will Howie swallow his pride and cut Nate Allen’s bum ass?

Stop being the cap champions and sign 2 starting safeties …pick up “Q” on the cheap and bring in sign Gholston.

Hell bring in that corner from Miami too!

This defense is atrocious and the failed Davis as defensive coordinator will can continue to fail if the defense stays the same.

what is the issue with this team not wanting an intimidating force at the safety position?

Remember they told us Dawk was over the hill? They draft garbage ass Nate Allen when Earl Thomas was sitting right there in the first round…trade up and picked garbage ass Graham.

There are 10 Safeties out there and 8 of them won’t be signed in the first 72 Hours.. A very deep Safety Class. .Eagles can take their Time and bring in the Right player and not overpay .. Goldston & Quin will likely be the only signings
with Ed Reed, Charles Woodson, Leron Landry, Dwan Landery, Adrianne Wilson, Kenny Phillips, Quintin Mikell, Sherrod Martin all lasting thru the week..
No Sense in any Team overpayting for a old Vet ..

Patrick Chung is ass……The defense in New England was pathetic

Hey songs, glad to see you back from your sabbatical