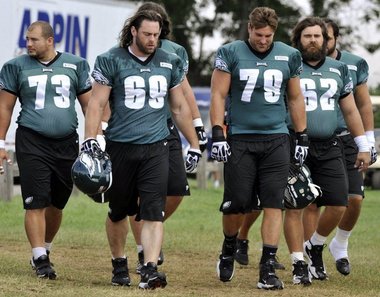 The Eagles players will start going through conditioning and weightlifting workouts at the Nova Care Complex this Tuesday, April 2nd.  This won’t involve practicing in uniform as a team.  They can’t have the coaches working out the players in football drills.  It’s expected to be weightlifting and intense conditioning.

There seems to be quite a bit of anxiety about what they’re going to be doing when the workouts start.  It sounds like circuit training, where you never stop moving during the workout in order to keep your heart rate at a high level throughout.

I Herremans hit it on the head.  I’m Chip Kelly will try to take advantage of the fact that the big defensive linemen get worn out during no huddle situations, to the point that they just stand in place during the play.  One of the reasons the no huddle offense works so well, is because the pass rush evaporates when the defensive line get tired.

One of the keys will be getting the Birds offensive linemen in great shape, so that they can take advantage of those situations.

“The weight conditioning is a little bit more up-tempo than it was under [previous strength and conditioning coach]Barry Rubin,” Eagles center Jason Kelce told reporters Thursday’s during a fund-raiser for Herreman’s charity.  “I think that part of the reason why is because we’re going to run up-tempo. Instead of being able to relax and just kind of walk around the weight room and do your lifts, it’s more at a steady pace where you have a set amount of time rest period. I think the receivers and those guys might be doing a little bit more conditioning. They know they’re in for a lot of running in this offense.”