Notes From The Phillies’ 7-2 Loss To New York 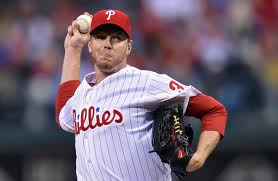 The Philadelphia Phillies lost their second straight game on Monday night, falling to the Mets 7-2 in Philadelphia.

It’s very hard to watch Roy Halladay struggle like this. The once elite pitcher looks more and more like a just a hollow shell of his former self, with no answers in sight.

That being said, I think it’s far too soon to write Halladay off. There’s certainly great reason for concern, but it’s not time to declare him a lost cause even though he’s pitched poorly for over a month now.

Right now, the former All-Star is lost. Before Halladay can begin to pitch effectively again, he’s got to accept that fact that can’t do the same things that he did in the past. A guy as established and proud as Roy Halladay is going to have a difficult time coming to terms with the reality that he’s no longer a top pitcher in the game.

The Phillies have no choice but to keep rolling Halladay out to pitch every fifth day. They’ve got to keep faith that the Doc will eventually straighten himself out, and become a respectable starter once again.

Notes From The Phillies’ 9-8 Loss To Kansas City