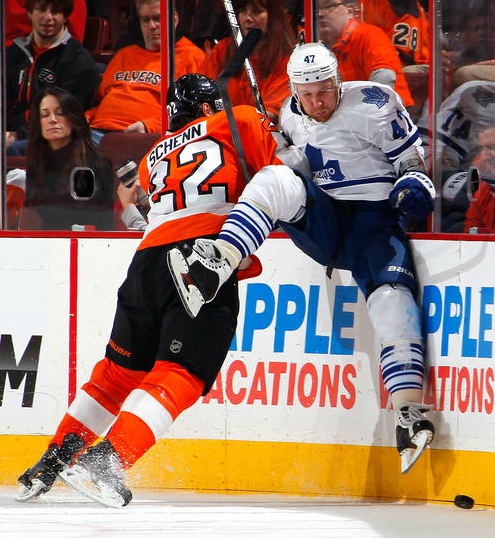 NHL fans would rather see their favorite players continue playing through the post-season on their way to a Stanley Cup.

For those players making an early exit, the next best opportunity for delaying the offseason is the 2013 IIHF World Championship. This year’s tournament begins on May 4 in Helsinki, Finland and Stockholm, Sweden.

As one of the “deepest” teams to not be making the Stanley Cup playoffs, the Philadelphia Flyers have a number of players who have already committed to representing their respective countries in the tournament.

Bill Meltzer of HockeyBuzz reported via twitter, “Voracek and Lauridsen confirm they’ve talked to nat feds about WC. Not set in stone yet but both would like to play.” Jakub Voracek hails from the Czech Republic (not to be confused with Chechnya) while Oliver Lauridsen is from Denmark.

The inclusion of Heeter and Noebels is promising for the organization. It’s unknown just how many games either will actually play, but they’re getting attention at the international level and will be playing against tough competition.

Per the Adirondack Phantoms’ press release on the two prospects,

15 players were named to Team USA today including two goalies. Cal Heeter will be joined by Ben Bishop of the Tampa Bay Lightning as the team’s netminders. Most of the players on Team USA have played in the NHL as well as on previous national teams. Heeter is just one of three players on the roster who has not played in the NHL and is joined by only one other player (Bobby Butler) who is making a National Team debut.
Cal Heeter publicly expressed his pride at the selection on his twitter account, “So excited to represent USA at the World Championships in Finland! Truly an honor and a great opportunity. Can’t wait for this experience!”
The 24-year-old from St. Louis spent most of his rookie season with the Adirondack Phantoms where he played in 32 games going 12-16-3 with a .908 saves percentage and 2.92 goals-against average. The former Ohio State University Buckeye also spent part of this season with the Trenton Titans of the ECHL where he played in eight games going 3-3-0, .900, 3.18. Heeter was signed by the Flyers as a free agent last spring following the completion of his four-year career with the Buckeyes.
* * * * * * * * * *
Marcel Noebels is a 21-year-old from Toenisvorst, Germany who has previously played for Team Germany IIHF national teams in the Under-18 and Under-20 tournaments. In his rookie season, Noebels scored a combined 22 goals and 29 assists for 51 points between Adirondack and Trenton in 74 total games. Noebels scored 13-10-23 in 43 games with the Phantoms in the second-half of the season. He began the year with Trenton playing in 31 games and scoring 11-19-30.
Noebels scored his first professional goal against fellow countryman and teammate on previous German national teams Philipp Grubauer when both were in the ECHL at the time. Noebels with Trenton tallied against Grubauer with Reading on October 17, 2012.
* * * * * * * * * *
The IIHF World Championship tournament takes place from May 3-19 in Helsinki, Finland and Stockholm, Sweden.  NBC Sports Network will air all Team USA games.
Team USA opens their tournament in Helsinki on Saturday, May 4 at 5:15 a.m. (EDT) taking on Austria in the round-robin pool-play of the opening round.
Team USA is in the same group with Germany and the two teams will play each other on Sunday, May 12 at 9:15 a.m. (EDT) in Helsinki.