Notes From The Phillies’ 5-1 Win Over Milwaukee 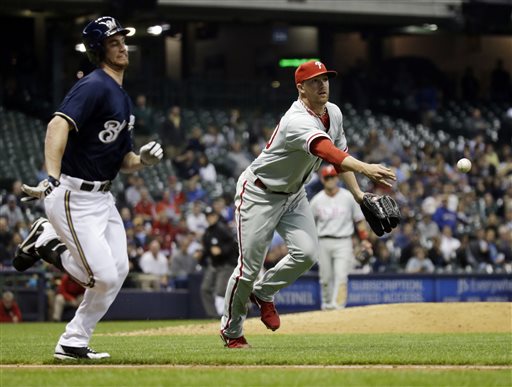 The Philadelphia Phillies won their fifth straight game on Thursday night, taking down the Milwaukee Brewers 5-1. Their record improves to 31-30.

I actually like Charlie’s idea to bat Michael Young first. Young hasn’t been anything more than a singles hitter all season, and he’s been killing the team with double-play balls. He’s still a smart enough hitter to work a count and take a walk, and that may make him the best fit for the lead-off spot on the team at the moment.

You can tell that Manuel really wants no part of Ben Revere in his lineup, especially with John Mayberry playing well. Although Mayberry is far from an ideal everyday outfielder, Manuel would rather have Mayberry’s power in the lineup instead of Revere’s complete and utter lack of it.

The new lineup worked well for Charlie tonight. Young and Mayberry were both productive at the top of the order, and the offense put up a solid five runs.

The Phillies are on a roll right now. They’ve ripped off five in a row, and they’ve got their record above .500 for the first time all year. They’re becoming fun to watch again, and they’ve got a good chance to keep the winning streak tomorrow with Cliff Lee on the mound.

Vick Needs To Stop Talking To The Media