Notes From The Phillies’ 5-4 Loss To Milwaukee 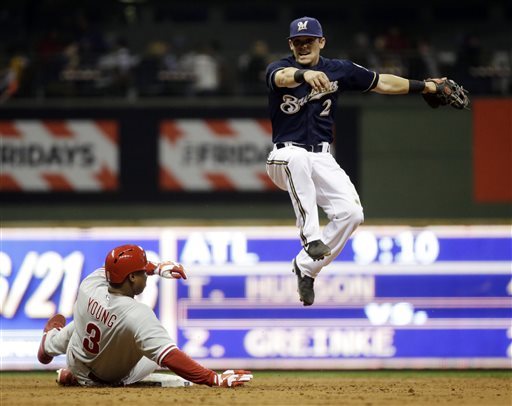 The Philadelphia Phillies had their five game-winning streak snapped on Friday night, falling to the Brewers 5-4. Their record drops to 31-31 on the year.

The Phillies seemed to be on their way to a sixth consecutive victory. They jumped out to four-run lead, but Cliff Lee was unable to hold it and his offense shut down after the fourth inning.

Charlie Manuel had a short bullpen to work with tonight, and it hurt him. He wanted to try and give Mike Adams and Antonio Bastardo the night off, and in order to do that he was forced to keep Lee in the game for an extra inning on a night where the lefty didn’t have his best stuff. Then Charlie had to rely on Jeremy Horst to keep the game alive, and while Horst was able to strand a runner on third and escape the eighth inning, he had no chance against the heart of the Milwaukee order, going up against powerful righties like Ryan Braun and Aramis Ramirez.

The Phillies have now returned to the .500 mark, and will try to get back on the right track with Kyle Kendrick on the hill tomorrow.

Vick Needs To Stop Talking To The Media