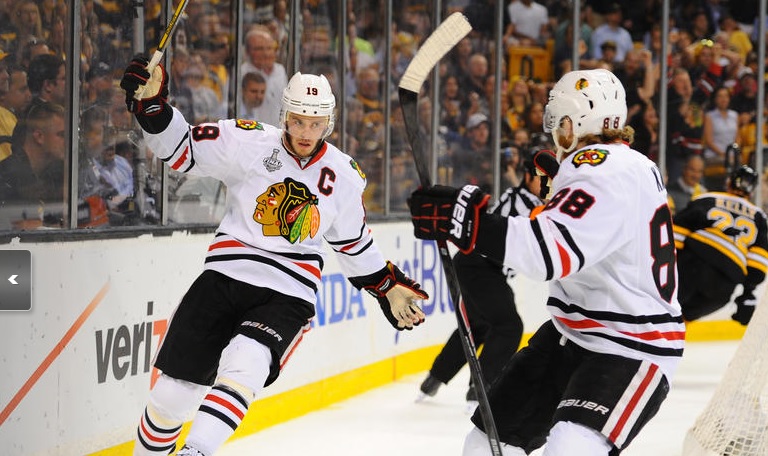 Four years ago (give or take a week), the Chicago Blackhawks won their first Stanley Cup in 49 years.

Patrick Kane’s All-Star finishing move, otherwise known as “just throw it at the net,” beat goaltender Michael Leighton at the Wells Fargo Center, much to our collective disappointment.

Once again, the Blackhawks have won the Stanley Cup- in six games, no less- on the road.

Milan Lucic scored for the Boston Buins just past the halfway mark of the third period, grabbing the lead for the Bruins in a pivotal d0-or-die game.

In perhaps their second worst epic collapse (the worst also in 2010, *snicker*), the Bruins then allowed Chicago to score two goals in 17 seconds with less than a minute remaining in regulation.

The Bruins barely made it out of the Stanley Cup Quarterfinals against the Toronto Maple Leafs, having been down 4-1 early in the third period of that series’ Game Seven before scoring four unanswered goals. They should have known better than any other team in the NHL that “it’s not over till’ it’s over” is perhaps the most ironclad mantra in hockey.

Some Flyers fans may still be bitter about the 2010 loss, but tonight’s victory is a reminder of just how strong their core is. Kane, Jonathan Toews, Marian Hossa, Patrick Sharp, Brent Seabrook, Duncan Keith, Nicklas Hjalmarsson, Corey Crawford and Dave Bolland (who scored the game winner) remain from the 2010 Cup team.

Kane was also awarded the Conn Smythe Trophy for play-off MVP, having scored 9 goals and 19 points in 23 games played.

The Blackhawks are in a better position with the salary cap than they were in 2010, so a mass exodus of players is not expected to take place for the team to continue operating. The fact that the organization was able to win the Stanley Cup again in four years after losing nearly half the roster is a testament to their organization and how well they have maintained a high level of quality drafting.

Everything begins at the draft, and the ‘Hawks would not be where they are today without it.

The 2013 NHL Draft will be held this Sunday in Newark. Hopefully the Flyers can learn from it and continue rebuilding.

Notes From The Phillies’ 4-3 Loss To San Diego