Notes From The Phillies’ 11-3 Loss To St. Louis 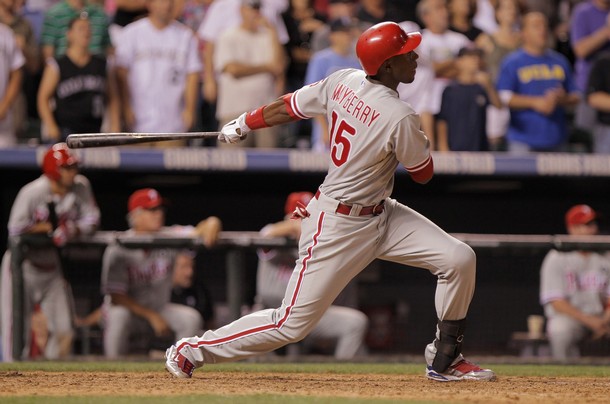 The Philadelphia Phillies lost their fourth straight game on Wednesday night, falling to the Cardinals 11-3. Their record drops to 49-52.

Things just seem to be going from bad to worse for this organization.

Jim Salisbury of CSNPhilly.com reports that the team may be near a contract extension with second baseman Chase Utley.

I don’t like the sound of that at all. When he’s been in the lineup, Utley has played fairly well this season. He’s shown he’s still got a little pop in his bat. But at the same time, he’s nowhere close to what he was in his prime. Its time for Ruben Amaro and the organization to look towards the future; towards starting over and rebuilding.

Utley’s value won’t be any higher than it is right now, and he’s playing well enough that the Phillies could get a pretty decent package in return for him. If the Phillies still want to re-sign him, do it in the off-season after he becomes a free agent. The team could still get their prospects, they’d give Utley a chance to pursue another World Series ring, and then the two sides could reunite and try things again next winter.

However, the Phillies just don’t seem to be interested in anything of the sort. They’re apparently not even listening to offers for Utley at the moment. It’s a mistake to be stuck in the past. No team ever moves forward by recommitting to aging players after their best years have passed them by.

Are The Phillies Finished?

How about a shout out to that John McDonald now I see why they signed that guy, he is a beast. Pitchers mound power for days.

On a serious note that John McDonald signing was clearly a move by Reuben to tank the rest of the season for Wiggins right?

On a real serious note this organization really really really needs to move Chase. I cant see a more valuable position player on the market or who should be on the market and think they could get a big haul for him pending are scouts ability to scout. This nonsense of keeping him/resigning him because of his “legend” in Philadelphia is really bad business on so many levels.

Mayberry has some made all kinds of boneheaded plays this year…he’s misplayed a lot of fly balls that he should have caught, and the sad thing is that he’s been the team’s primary defensive replacement…ha.

Its also unreal to me the complete lack of outfield depth this team has. Ben Revere gets hurt, and Amaro doesn’t call up an outfielder and opts to keep three catchers for some reason? And only when Dom Brown gets hurt, he calls up Michael Martinez who isn’t even a true outfielder.

You mean to tell me there isn’t a single legitimate outfielder in the minor league systems that we can call up? That’s absolutely ridiculous, and its a serious indictment on the job that Amaro has done over the last two years.

yep nothing ready in the minors or even close really. but situations like this teams sometimes require you to throw some shit in the wind and just take a flier and call someone up… the lack of depth really is embarrassing and i didnt understand from day 1 and still don’t how our gm let us trot out that of.

i dont think you can really get anything for young, young, papelbon or chooch.

your best trade asset is utley and not sure if this moron has the stones to pull the trigger.

and then you have lee. if you are overwhelmed in a deal with lee i guess at this point you have to but i dont think he gets you an insane deal with that salary but then again boston has the $ and prospects.

basically if you dont trade utley or lee we dont get any younger or better.

Mayberry is not an MLB player…the guy is a stiff…. he is a 5th OF at best….

Amaro is a joke! He put together a pile of garbage this season in the OF,…

Now, Amaro is going to lock up Utley for 3 more years….hence, he only cares about selling merchandise and tickets and not winning…

i just dont see this deal happening with utley.

deal meaning resigned right before the deadline. i actually think he will be moved and this is a smoke screen to get his name out their and force teams to up the offer?

Rumor floating around is that Utley Signs a 3 Year Deal with the Promise to
become the Next Manager of the Phillies.. Ryne Sandberg is miffed and will be leaving the Phils Organization for a Manager’s Position Opportunity with many Clubs around MLB as they almost came to blows in yesterday warm-up session.. Charle Manuel Coach’s next Year and Utley becomes Player-Manager leading the Phils from 2015 on..

in all seriousness sandberg shouldnt be the manager in waiting…

I hope you are right. He should have some pretty solid value for a contending AL team. Perfect #2 hitter. Great contact hitter who is patient with a high OBP with some power. Plus baserunner. Not basestealer, but baserunner. Good leader in the clubhouse.

wouldnt be surprised to see the athletics make a real good offer for him. they have a lot of prospects who could help us in the near future and they have so many it wouldnt hurt them. ie – Addison Taylor, BJ Boyd, Michael Choice & Michael Taylor

if phillies trade lee i only see redsox willing to take on the deal and i think the deal would have to center around jackie bradley jr.

Good point with Oakland. Would be a great fit for them.

I don’t think that Ruben trades Lee. He likes having “aces” on the staff too much.

I think that Papleboner has played him self out of being traded because he has been so bad. That was/is a really bad contract.

thats why you move him for nothing no sense having a closer when your starters are gas cans, your bullpen is filled with gas silos and your position players cant hit

I agree. I just want his contract off the books and him out of here.

Starting Pitcher’s who will be Traded by Deadline
RHP Y Gallardo – Brewers (Big Contract, Underachiever for the Brewers)
RHP Kyle Lohse – Brewers (Lots of Playoff experience playing on a bad Team)
RHP E Volquez – Padres (Big Contract on a bad team, will be moved)
LHP B Zito – SF Giants (Not much left in the tank, currently has low Salary and Playoff Experience and Left Handers are always in demand)
LHP M Burhle – Tornoto Vlue Jays (another Veteran Left-Hander, Big Contract, past his Prime but still a competitor)
LHP J Saunders – Seattle Mariners (Another Veteran LH with Playoff Experience)

Steve Susdorf has joined the Phillies in St. Louis.
Susdorf is not on the active roster yet but could be officially added if Domonic Brown is still experiencing concussion-like symptoms. Susdorf, a career minor leaguer in the Phillies’ system, is batting .335/.419/.428 with one homer and 25 RBI in 70 games this season at the Triple-A level. He turned 27 years old in March.

Haha, well I’d be willing to take anyone over Laynce Nix and Michael Martinez at this point..if he can at least play the outfield like a somewhat competent fielder that’s a start at least.

If I didn’t love the Phils, it would be almost comical watching them play the Cardinals. The Cards are the antithesis of the Phillies. They are patient at the plate, hit behind runners, play good defense and rarely strikeout. If this Cardinal series (and I’m sure Tigers) isn’t enough evidence of how deficient this Phillies team on so many levels and convince the GM to sell, nothing will. I have supported Amaro on many of his previous dealings, but he needs to push the detonate button now.