The Making Of A New Eagles Defense – Part Two 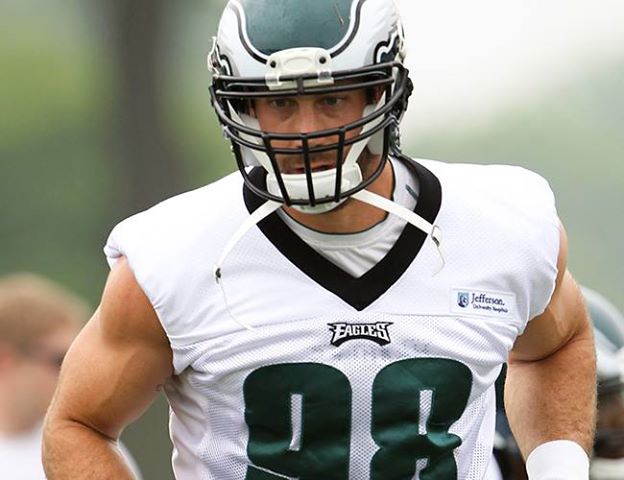 strength of the hybrid 3-4 under defense is the weakside or the side away from the tight end.  That’s where four of the seven players are lined up.  It’s one of the reasons, the Eagles will move the strong safety into the box on the strongside of the formation.

The Eagles want to be able to jump back and forth between a 3-4 hybrid under defense to a pure 3-4 defense, but they don’t have the personnel to play a pure 3-4.  Billy Davis is smart enough to know that you need monsters up front to play the pure 3-4 defensive front.

Back to the hybrid 3-4 under defense.  The strong side defensive end and the nose guard in the hybrid 3-4 under defense must be able to take on the double-teams.  Geathers will be doubled at times on running plays by the offensive tackle and the tight end, which isn’t really the same and taking on two offensive linemen.  He does a good job against the matchup.  Sopoaga knows how to take on the double-team at the nose tackle position, and Antonio Dixon, his likely backup, is getting better at dealing with double teams..

The Birds don’t have much depth at those positions because the backups just aren’t big enough.  I won’t be surprised if the Birds grabbed some big defensive linemen off of waivers when teams start cutting players.

The former Houston Texan is too big, strong, physical and athletic for the tight ends to maintain a block on him long enough to run plays his way.  He has a nasty attitude, which is a good way to play defense.

He’s got long arms and he uses them to manhandle the blocker.   Barwin makes life tough for Brent Celek, his former teammate at the University of Cincinnati, in the linebacker versus tight end battles every day.  Barwin has an air about him that he’s not the guy to mess with.  All the Eagles tight ends would probably agree with him.

Barwin also has the much underrated ability to jam tight ends and delay their release.  One of the problems the Birds defenses have had the last five or six years has been their inability to hold up the tight end up.  A good tight end will shred a defense if he’s not held up at the line of scrimmage.  Barwin will reduce that problem and he’s also able to do a great job of covering tight ends in man-to-man coverage.

LIke Cox, they need him to have a big year in every aspect of the game, as a run stopper, pass coverage defender and pass rusher.

Geathers is as big as a house, 6’8″ 340 pounds, and he has been doing a good job versus the run but he’s not much of a pass rusher.  His long arms allow him to get separation from the blocker, so he’s able to get off of blocks and create problems for the offense in the running game.  As I said earlier, he’s one of the few defensive linemen on the roster who knows how to take on a double team.

I think Geathers could be effective at knocking down passes.  He’s got to improve his game and be some type of a factor versus the passing game.  I think he needs to be pushed more because he’s too big and too strong to be circulating around the NFL like he can’t play.  I’m going to be keeping an eye on him.

Geathers is technically sound, but I wish he was meaner because I think he could be more dominating.  He’s a big nice guy rather than the kind of defensive linemen, who will bend an offensive lineman backwards and hurt him, because he knows that offensive lineman will have no mercy on him if they get him in the same situation.

Rookie Bennie Logan is very talented and will likely be the guy who eventually earns a starting job, but he’s not there now.  He’s not ready to play the 3-4, but he’s much better at playing the three-technique defensive tackle, that Cox will be playing.  Logan will wind up backing up Cox or Geathers.

I’ll see him do a good job on a couple of plays, then he’s getting rolled out of there on another one. Right now he’s still getting acclimated to NFL offensive linemen.

Cedrick Thornton is kind of undersized for the position.  I think he’s too small to deal with the double teams. but his quickness and strength make up for his lack of size.  He’s the best pass rusher of the two and will likely be used on pass downs.  Geathers is the favorite to get the job on first down, but he must learn to play with a lower pad level.  They must get quality play from this position, but it’s not a guarantee.

I’ve seen rookie free agent defensive end Damion Square flash a couple of times.  He’s got decent size 6’2″ 292, along with tremendous quickness. He’s a youngster worth keeping an eye on.  Surprisingly, he’s got a lot better chance of helping the Birds this year than draft picks David King and Joe Kruger who need to get bigger and stronger to play in this league.

Another key player in this defense is the (Leo) position which current Jacksonville Jaguars head coach Gus Bradley talked to us about.  This is the weakside outside linebacker, probably Trent Cole or Brandon Graham.  They’ve been working on making the transition from playing defensive end to playing outside linebacker.

Cole doesn’t seem to be able to rush the passer with the same ferocity as he did with his hand on the ground.  The former defensive end had a good day yesterday, though.  He flew in and forced a fumble between Nick Foles and DeSean Jackson.  They panicked with Cole in the backfield near the ball.

Everybody has been talking about Cole and Graham learning to drop into coverage, but that’s no where near being the most important aspect of this position. They’ve got to get a double-digit number of sacks from this position and thirty or more pass rush pressures, which force the passer to get rid of the ball.

The Eagles don’t have a great secondary, so they’ve got to get pressure on the quarterback.  They’ll also do it with blitz packages, but you get caught blitzing too much.  Billy Davis and company need the weak side outside linebackers to beat their man and get to the quarterback.

The big question is whether Cole or Graham should be starting at the position.  Like the quarterback position, the starter will be decided in the preseason games.

I don’t think Cole has the ability to rush the passer with the power he has in the past.  He’s battled guys who outweighed him by fifty to a hundred pounds for a long time and I don’t think he can do that any more.  Cole’s legs have a lot of mileage on them.   I think Graham is quicker with fresher legs and will probably be a more effective blitzed than Cole.  Remember that Cole played just about the entire season, while Graham only played part of last year, yet Graham led Cole in sack 5.5 to 3.

From what I have seen, Graham is more explosive as a pass rusher now.  I see more quickness in him than I see in Cole.  Neither one of them are great pass coverage guys, but they’re not going to be dropping in coverage very much any way.

At times they will get the weakside linebacker matched up against a running back or tight end and they must take advantage of the situation.

Who knows, we may find out that Barwin is their best pass rushing outside linebacker.  If that’s the case, defensive coordinator Billy Davis will try to put Barwin in position to rush the passer much more and that will mean less playing time for the other linebackers.

Micheal Vick Has His Best Day At Training Camp