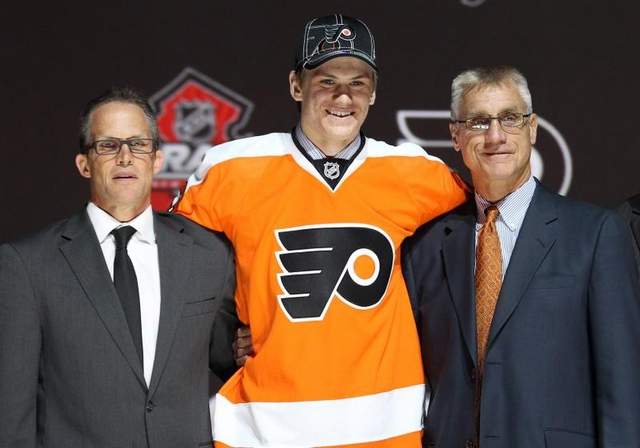 For those that follow me on social media or read my analysis of the Philadelphia Flyers’ draft selections at the 2013 NHL Entry Draft in June, you may recall that I… overreacted a little.

For the second year in a row, the Flyers went off the traditional boards with their first round selection and took a player that many scouting services had pegged as a late first round pick. Last year, center Scott Laughton was drafted over reputable defensemen like Olli Maatta and Brady Skjei.

This year, they opted for 6′-6″ defenseman Samuel Morin from the Rimouski Oceanic of the QMJHL, whose draft rankings across the board skyrocketed from mid-to-late third round positioning in December all the way to the head of the class in June.

Based on the inaugural edition of the Philadelphia Flyers’ new “behind the scenes” style web series “Flight Plan,” Morin was their guy all along.

It’s certainly possible that the series could evolve as the organization’s public relations department experiments with both format and content, but the initial episode was a very interesting look into how much debate went into the Morin selection days before the Draft.

For those that don’t have the time or ability to watch (perhaps at work), the episode follows the Flyers’ scouting department as they try to finalize their prospect rankings days ahead of the Draft. Chris Pryor, the Flyers’ Director of Scouting (his title changed with the hiring of Ron Hextall) took center stage along with WHL scout Mark Greig and OHL scout Dennis Patterson (both of whom played for the Flyers at one point in their respective hockey careers).

Interestingly, most scouting services had Rasmus Ristolainen and Darnell Nurse ranked within the top ten, with the likes of Ryan Pulock, Nikita Zadarov and Joshua Morrissey following in the 10 to 20 positioning. Per “Flight Plan,” though, the Flyers had Morin (6th), Mirco Mueller (7th) and Zadarov (8th) ranked ahead of Ristolainen (11th) and Nurse (12th). Pulock wasn’t mentioned in the webisode.

Chris Pryor: “So who’s got the most upside?”

Dennis Patterson: “Morin… I don’t know if he’s going to hit it, but he has the most upside… You’re reaching, but he’s a 6’8” guy. Where do you find these guys? There’s some reach in him, but he’s gonna have value whether we like him or we don’t.”

The main points mentioned were Morin’s height, his “upside,” and his “hardness.” Hopefully a more thorough evaluation of Morin’s skills and skating played into the conversations not included for the episode.

The next installment follows the same topic, with coverage of the draft and some insight into the trade proposed by Montreal for the 11th overall pick.

On a related topic, Mueller ended up being drafted 18th overall by the San Jose Sharks. A radio interview conducted last week and reported on by the blog Fear the Fin revealed that the Sharks’ scouting department includes in-house statistical analysis along with traditional scouting for junior player evaluations.

Per Brian Gross, Sharks scout (and as transcribed by Fear the Fin):

“For example, the boy we drafted, Mirco Mueller, out of Everett. We knew about him a year before the draft. What we did is when we got him into the Western League, we really started to pick him apart and then we built a whole profile on him. And, at the time we drafted, he was one of maybe four guys we were very interested in. And the reason we moved up was because that small little package of guys were starting to go and so we had to move up to get after this guy.”

While I doubt the Flyers would ever use statistical analysis in their evaluations, it is interesting that they held Mueller in such high regard as the Sharks did.

Riley Cooper Returns To Action With The Support Of His Teammates