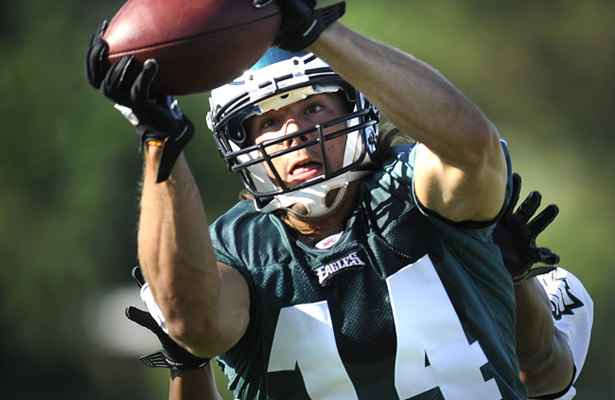 Does Riley Cooper suit up week one for the Philadelphia Eagles?  What’s it going to take?  Will it be the interviews that Cooper gives until the 53 man roster is finalized?  How about the consensus of the locker room and coaching staff?  Shouldn’t all of those factors be second to the one area that counts most?  What does the stat line need to read after the preseason is over for Cooper to make the team?

Pre-Maclin season ending injury; Cooper was on the bubble as the fifth receiver.  Jackson, Maclin, Avant and even Johnson were all ahead of him on the depth chart.  Many like me thought the acquisition plus the re-signing of Benn meant the end of the road for the former Florida Gator.  When Maclin went down, somehow it became Cooper’s job to loose, as the competition for a replacement “in-house” was slim pickings.  Post viral video and the controversy that has headlined our Philadelphia Eagles over the past week, Cooper has re-joined the team.  The “help” that was provided to him by the Eagles is pointless to use as a measurable means to decide if he has “learned” anything from all of this.  Going forward it’s about if he has the skill-set to make this team.

With Celek, Ertz, Casey and Harbor; do we really need his “size” anymore?  Cooper has mediocre hands and lousy speed for his position.  I don’t see how he best “suits” the void left by Maclin.  Benn has yet to prove anything over a consistent period in the NFL; but has the size and “potential” to fill the void.  Sheppard has looked great at practice, but he is an unproven, non-drafted rookie.  We all remember Na Brown?  With Maclin gone, you can’t replace the offensive plan you were putting together for his skill-set; that player is not on this roster.  What is on the roster is very nice depth at both the running back and tight-end positions.  You have two smaller but very fast receivers in Jackson and Johnson.  You have an offensive genius per many high ranking opinions at the head coaching position.  What is Riley Cooper going to add to make this team better?

At the end of the day, when we are able to focus on football “first” and not the racial commentary spoken at the concert, should Cooper make this team?  Will 9 receptions for 118 yards and a touchdown over the course of the preseason get it done?  If he drops a ball or misses a blocking assignment, is he immediately declared finished here in Philadelphia?  I’m rooting for a receiver to step up; and allow the coaching staff to request Cooper to turn in his playbook.

Riley Cooper Returns To Action With The Support Of His Teammates

Riley Cooper is a lock to make this team because he’s probably the best blocking receiver on the team and I think because of this situation I think he’s gonna have a breakout season.

Avant is the best blocking WR on the team! Have you really seen enough of Cooper to label him the best, anything?

I think Eagles keep 5 WR’s & and 3TE’s (Celek, Errz & Harbor) with academy listed as FB who is also a TE..
At WR
D-Jax, Avant, D Johnson are locks
With R Cooper & R Sheppard, BJ Cunningham & I Momah & G Salas
fight it out for the Final 2 Spotss

If he stay healthy, there is NO WAY he doesn’t make the team. D-JAX, Avant, Johnson, Cooper, and Sheppard. ( makes it if we keep 6.)

Given that the Eagles are into excusing bad behavior after a couple of days of “Sensitivity Training” of course the mediocre receiver is going to make the team.

Even though generally I would say that the Eagles should wait until league cut downs to look for WRs Greg Camarillo and Chad Johnson would suffice for filling camp slots and one or both of them might surprise.

Can we all be equally upset and call for the ouster of Hugh Douglass . Can the same people who want cooper cut and never forgiven ask for the same for Douglass. He used a couple slurs including the same one. And it would be pronounced ‘er’ not ‘ga’… Equally offensive

Funny no BREAKING NEWS on sports center , nothing on gcobb and nothing on csn Philly. What a world

I have heard that Graham, Phillip Hunt & Chris McCoy have all looked good as well as Conner Barwin, but that Trnet COle is a Fish out of Water standing up.. I can’t believe they didn’t trade him around Draft Time for he simply does not fit playing a Stand-Up OLB but his big Contract probably precludes that and do believe that he could be released after teh 2nd Pre-Season Game to allow him time to hook up with another Team unless the Eagles incur some Injuries at DE or OLB..
I think OL Todd Herremans is on the bubble also..