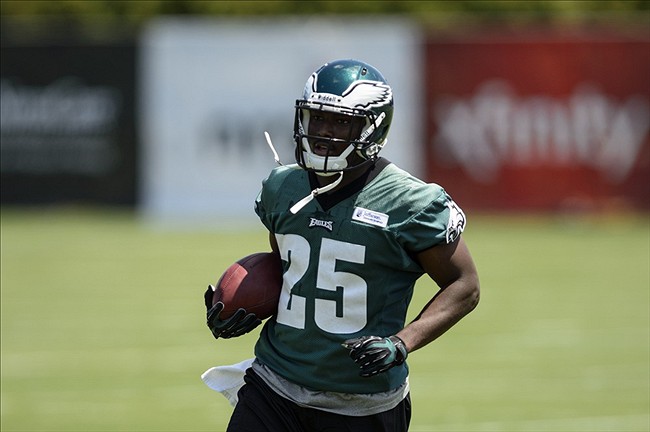 On Wednesday afternoon, LeSean McCoy told the media that he felt like he was flying under the radar. After following up a 1,300 yard, 20 touchdown season with just over 800 yards and twice as many fumbles as touchdowns, under the radar is just where Shady landed himself in 2012,

The fifth year running back put himself back on the radar last night against the Carolina Panthers by displaying his signature moves and playing a big role in the Eagles offense. McCoy played just the first half while splitting time with Chris Polk but ran for 47 yards on his eight carries. He also added three receptions for 16 yards. Shady looked to be in midseason form in his preseason debut.

The run that stood out most among McCoy’s 11 touches was a first down run late in the first quarter that gained him 21 yards. McCoy, who later said he should have scored on the play, started his run to the left. As three defenders stood in his path, he made a Barry Sanders-esque cut to the middle of the field that left Drayton Florence grabbing air and the other two defenders stumbling. The run was reminiscent of runs he had plenty of in 2011 that were rare in 2012.

Number 25 is ready for the regular season and he will be one of the biggest factors that will ultimately result in the success or failure of the Eagles offense. “The tempo is definitely effective,” said McCoy. “We’re going, we’re going, we’re going. We’re fast.” The tempo of Thursday’s game was closer to what the Eagles offense will look like during the regular season. The Eagles ran 69 plays against the Panthers which, while it is a significant drop from the 86 against the Patriots, it is still more plays than their opponent and more than the average team runs in a game.

“It’s crazy because I saw how tired the defense was,” McCoy added, “Imagine if it was four quarters with this type of tempo. It shows you how effective this offense will be.” McCoy’s touchdown run showed that the defense was worn out from a 74-yard drive that included five first downs on seven plays in just over two minutes. Shady ran out to the left from the goal line and outran three defenders to paydirt. The defenders never had an angle on McCoy and he scored easily.

Thursday’s game ended with just a five point victory but the Eagles had two early drives stall that looked to be heading for more points. On Nick Foles’ first drive, a drive that consisted of six first downs and Foles going 6-for-6 on his first six pass attempts, he was hit while trying to throw the ball away that led to an interception in the back of the endzone. On Vick’s first drive, Chris Polk and Jason Avant were leading the team down the field when Polk was stripped of the ball and the Panthers recovered.

Turnovers plagued the Eagles a season ago and it is a problem that will need to be fixed if they plan on improving from their 4-12 record from 2012. Regardless, the Eagles held on to beat the Panthers 16-9 for the last game at the Linc before the regular season. The defense improved and the LeSean McCoy-led offense impressed. The “dress rehearsal” for the regular season comes next Saturday against the Jacksonvill Jaguars. Shady will be looking to impress again and give a preview of what is likely to be his return to elite status.

Vick Has Earned The Starting Job