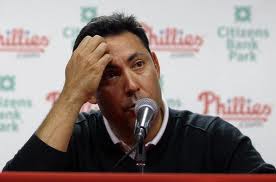 Something had to change.

The Philadelphia Phillies are going to miss the playoffs for the second straight season. They’re likely to finish below .500 for the first time since 2002. There’s even a chance they could fall to last place behind the lowly Miami Marlins.

Too many things have gone horribly wrong in the last two years for this franchise. A dramatic shakeup was needed. Responsibility had to fall on someone’s shoulders, and that someone’s head would have to roll in as atonement.

And so, the illustrious braintrust of the Phillies’ organization put their heads together. They considered all of the events and evidence before them, and found fault in a key member of the franchise. They found him to be responsible for the team’s failures and decline, and passed judgement on their guilty party by ordering a termination, effective immediately.

They got the wrong man.

Manager Charlie Manuel became the team’s scapegoat this afternoon, as the team announced the dismissal of the nine-year manager who had played an important role in 1,000 regular season victories, five division titles, two World Series appearances, and one championship.

Manuel certainly deserves his share of the blame for the decline of this team. Charlie’s message wasn’t getting through to the team. A manager who has been billed as a “hitting guru” couldn’t do anything to improve this team’s collective frustrating, impatient approach at the plate, an issue that has hurt this team since 2010.

But Manuel was far from the primary reason that this team has fallen off the map.

The main culprit of the last two terrible seasons has been General Manager, Ruben Amaro Jr.

In order for a manager to be successful, his GM has got to provide him with a talented, deep roster. A roster with few holes, and capable of sustaining injury. Amaro completely and utterly failed to do this, and instead provided Charlie with a bunch of miserable, ineffective free-agent signings that seemed doomed to fail from the start.

Amaro hung Manuel out to dry. He gave him a roster with no offensive depth and no bullpen, and pinned the team’s hopes on Ryan Howard and Chase Utley’s ability to return healthy.

How did Amaro do preparing the team to be competitive prior to this season?

Somehow, Amaro managed to do an even worse job than he did a year ago. He left Manuel with one of the worst outfields in the major leagues, and a completely empty bullpen.

Still not convinced about Amaro’s inability to build a team? Take a look at his trade history when it comes to selling veteran players.

These failed trades have set the Phillies back. These were Amaro’s opportunities to add some good young talent that could help the organization, and he failed to acquire even one impactful player.

It was probably time for the Phillies to move on from Charlie Manuel, but there’s no doubt that Ruben Amaro has his fingerprints all over this team’s failures. In his five years as general manager, he’s proven that can hand out bad contracts, make bad decisions in free agency and trades, and doesn’t know to handle or develop young talent.

Where is his accountability in all of this? If all of his failures haven’t gotten him in trouble with the organization, what will? Amaro has sent this team to rock bottom, and he should have been giving his farewell news conference before Charlie Manuel.

A Snapshot of Today’s Eagles Practice