A Snapshot of Today’s Eagles Practice 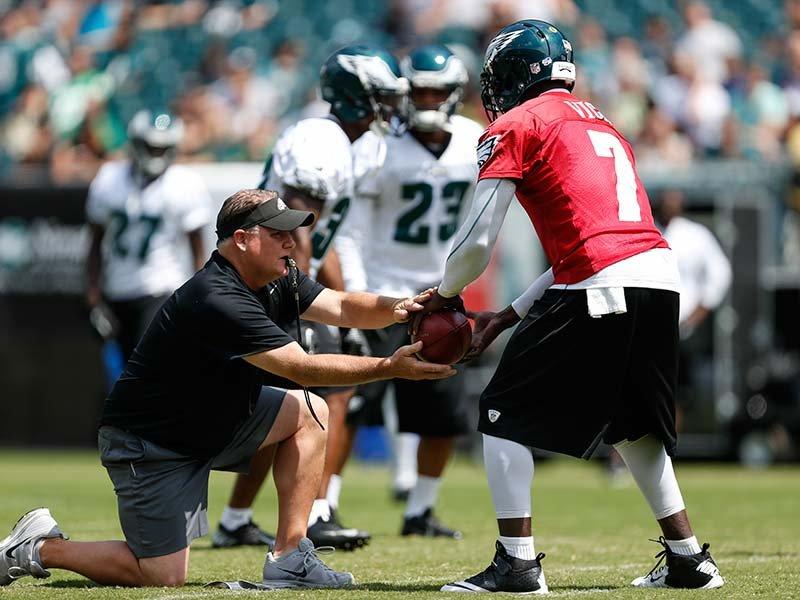 As I was entering Lincoln Financial Field this afternoon, I was thinking that after two preseason games Chip Kelly has the confidence of every player on the roster.  This football team is moving the ball consistently and the defense played much better this week.  There’s no question they think they can win by following Kelly.

The Eagles had a two-hour practice at Lincoln Financial Field in helmets without pads. I would have to give this practice to the defense.  The offense had their spots, but there were too many interceptions and far too many balls on the ground.

It sure seemed that Michael Vick took most of the plays at the quarterback position with the first string.  Vick didn’t have one of his better practices and Nick Foles was just as bad.  This wasn’t  the best of days for good quarterback play.

Vick started out the workout with a nice throw to Zach Ertz on a slant route on the goalline for a touchdown.  On the subsequent plays, Foles and Barkley misfired on their attempts to get the ball into the end zone from the three or four yard line.

Veteran tight end Brent Celek is currently the starter, but he’s going to have his work cut out of him in hanging onto the starting job as the season progresses.  Celek hasn’t been a reliable receiver.  He’s dropped a lot of passes.

HIs tight end competition of Ertz, James Casey and Clay Harbor will make things difficult..  All three of them have caught more passes during training camp than Celek.

I can see the confidence starting to ooze out of Mychal Kendricks.  He’s anticipating plays and routes.  He picked off a a Foles throw in the two receivers versus three defensive backs drill.

Harbor had a great practice today.  He dominated the one-on-one drill by going up and taking the football from the cornerbacks.  He also shook the coverage two times to get open. He’s gaining more confidence by working as a wide receiver, when he’s not playing tight end.  I think they should let Ertz do the same thing because they create some serious matchup problems.

Little wide receiver Damaris Johnson is catching the punts with surer hands than he did a year ago.  He’s also running his routes and carrying the ball more confidently.  You can see that big difference in the first year to the second year.

Unlike previous practices, DeSean Jackson wasn’t a major weapon today, but he was still able to catch a few.

I don’t think there is such a thing as a quick screen which Chip Kelly doesn’t like.  They run all types of quick screens.

At times, Vick and running back LeSean McCoy make the read option look lethal.  Vick holds the ball in McCoy’s stomach and makes his decision at the last split second and either way it’s not situation for the defense because they either have Vick or McCoy heading downfield with the football in his hands.

Rookie cornerback Jordan Poyer did a nice job of slipping in front of the wide receiver at the last split second and picking off a Matt Barkley pass.  Poyer hasn’t had the best of camps, so any positives he can come it with are valuable.

Felix Jones isn’t having a very good camp.  His speed was supposed to make him a standout, but it doesn’t seem to have it anymore.  His hands aren’t the best and he’s in trouble, when it comes to making this team.

The team period or !!-on-!! period wasn’t very good.  The offense wasn’t performing at their optimum level..

Jason Peters Practices And Plans To Go Against Jags

Good Stuff G-Man
Isn’t first Cutdown day Tue from 90 down to 75 or so???
I do not expect Felix Jones to make it past the 2nd wave of Cuts
When they get to 60 Players nor Danny Watkins, Antonio Dixon,
Jamar Cheney , Kurt Colenan
Raiders & Bills lost TE’s to knee injuries yesterday so maybe Celek can bring a 5th Round pick in Return…

Celek is a lock for this year Paulman. He is the only complete TE on the team right now. Ertz will improve blocking and in a year or so supplant Celek

good job Gman. also… there is a great article on philly.comm (leave off 1 m) talking about the system kelly is running. Here is a quote from Jkelce “The whole thing is designed to really take what the defense is giving you. It’s pretty clear-cut for the most part usually what [Vick] should do with the ball,” Kelce said. “It’s pretty simple and that’s something this offense has to be with the tempo it runs at”.

How refreshing is that? It goes into great detail what they should do if there is 5 or 6 or 7 in the box. No more…. Bombs away with 7 guys dropped into coverage. No more…. screen passes even tho they clearly have sniffed it out. They will take what the D gives them. I LOVE IT!!! Meanwhile…. in K.C. ….

My only fear with Kelly’s offense (I think simple is sometimes better) is that if it is that simple than defending it becomes simple. Show the QB 5 in the box and run blitz a corner and roll a safety to that side or, or,or. The chess match will be having Knowledgeable Defensive leaders that will have game planned with their DC in how to show a look fake a look like they are showing a fake ect ect ect.

Remember that we are not talking about a defense of college players with a year or so experience starting but going against guys who have been playing at the highest level for a few years, Full Time, for Millions.

I really like what chip is doing and think that just by running the ball and playing with balance we will see a better offense. I just worry that more experienced players and coaches will learn to trap us with our own strengths.

Can we send Buffalo Vick? Maybe Vick and Jackson for Their Safety Whats his name … and pick a player…(lol Kolb lol just realized that irony that would make half this sites heads explode)

Shut the Fuck up

That would be sweet!

I remember hearing about Kolb’s potentially upside compared to what we knew about Vick already, and it’s a resounding pattern now hearing what people are saying about Foles.

Nobody now is saying they were wrong in their assessment of Kolb but just rolling the same thought process on to another lesser talent than Vick.

Who would rather have Kolb over Vick today?

Who would rather have Kolb over Vick today?

I don’t want either one of them…. However, I don’t think we would have been any worse over the past two years if we had keep Kolb. In fact, didn’t Kolb far outplay Vick last year when the Cardinals beat us? Yep – Kolb – 2 TD passes… Vick 2 fumbles in the red zone.

Maybe five decent series in the pre-season is all it takes to make some people forget two years of disgraceful QB play, but I’ll have to see something in the real games.

What the hell happened to Felix Jones? He went from burning us up and down the field in that playoff game to looking like garbage. I really liked the signing when it happened, though he would be a nice backup to shady but he is garbage.
I also hope they cut Nate Allen. Just stop torturing us by sending him out there year after year. I would be surprised if he even made another NFL roster.

Songs is a good , very smart man, but his judgement is clouded by prejudice, bias when it comes o his evaluation of talent, especially the qb

And you can thank songs for zapping the biggest jag off ever on gcobb, that fraud navyeagle and his imposter schiller

Dudes kill me how many qbs in the league could take this roster, yes defense included to the sb. Id say only bout 7/10 could get us in the playoffs. So with that in mind and knowing you aren’t getting a top 10 qb. Noone trades those. You need a wildcard like vick. He could easily end up in the bottom tier. But his upside can actually be 1 of those top 10 qbs n get us in. Thats how I look at it. If he plays like a cpl yrs we win the nfc east.

Meant to say if he plays like he did a cpl yrs ago.

The NFC East is wide Open..
Go 4-2 within the Divison and split your other 10 him games and 9 or 10 Wins can win the NFC East this year.. I don’t see any team
Dominating and winning 11-12 games or more in this Divison

I have an early prediction now that Reid’s fat ass is outta here and the run game is keyed on under Chip.

This team will win 10 games and make the playoffs with Vick in the MVP conversations down the stretch.

Chip will be in coach of the year talk.

Giants 1st Unit (O-Line) was getting pushed around by the Colts Front 7 in th first half.. Still no real TE and RB is still a question mark
Defensively, they still have issues at LB & CB//
Cowboys OL is still in transition, but new 4-3 Defense is looking pretty good under Monty Kiffin.. a Consistent Pass Rush and solid Safety Play will be the Key to their Defense… DE George Selvie having a great Camp and may surprise with a bunch of Sacks for them under this new more attacking scheme..
Redskins have some weapons, solidified their OL, have strong Running Game and a solid Front 7 on Defense when Healthy… lots of questions still in their Seconday.. Have young Talent back there but will give up some big plays.. I think their Offense is more traditional Shanahan and will rely on a strong Running Game, Play Action, use of TE’s (Fred Davis/L Paulsen) when QB K Cousins plays.. I also believe that RGIII will not be ready to about Week 3 of the Season