Notes From The Phillies’ 5-4 Win Over Colorado 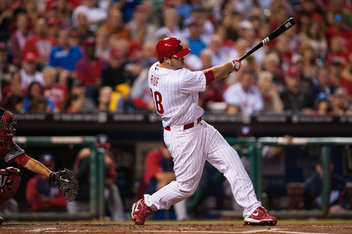 The Philadelphia Phillies won their second straight game on Monday night, taking down the Rockies 5-4. Their record improves to 54-69.

It’s once again time to complain about the Phillies’ lineup decisions.

Why was Casper Wells in right field, forcing Darin Ruf down to first base?

If Darin Ruf has a future on this team, its as an outfielder. When Ryan Howard returns next year, he’s going to be this team’s first baseman. Ruf needs every rep he can in the outfield in order to give him the best chance to be a factor on the team in 2014.

Ruben Amaro has already mishandled Ruf badly enough this season by allowing him to rot in the minor leagues so that the team could commit a starting position to the likes of Delmon Young. The last thing this team needs to do is waste time with Casper Wells and his .138 average in right field while giving Ruf meaningless reps at first.

It’s little things like this that make me gravely concerned about the future of this team as long as Amaro is in charge of overseeing all operations.

Has The Eagles’ Secondary Really Improved At All?

Chooch getting hot, just in time to delude the inept, idiotic FO, to give him an ill-advised 4 year $40M contract. WHOO HOOO!!!!

Oh DCar, you think that’s bad just wait until Halladay returns for three starts and does just enough to convince Ruben to re-sign him for another 3-years $45 million!

I know! Can’t wait. LMBO! This is the late 90’s 2.0. I hope the Ruin 2morrow apologists on here are ready for it, because this team is going to be bad, for a while, until .300 Monty get’s his head out of his dung shoot.

With the likes of Martinez, Wells, McDonald, being on this team, & even a remote thought of signing a stiff like Bernadina, is all that I need to say about Ruin 2morrow! We ought to change the team name to The Philadelphia Mendoza’s. GTFO!!!! When will it end, & why do I care & keep watching?

It’s incredible isn’t it…I mean good lord, how many useless outfielders that hit below .180 are we going to go through?

Very sad, embarrassing, state of affairs down at the Bank! But, the dum dums keep dishing out the bread, down there. And people wonder why, the Ownership, & FO don’t give a crap about the fans, & take them for granted!

How long is it going to be before all this craziness by this strapper amaro comes to an end! Why does he insist on not giving Ruf a solid chance in the outfield like you said we all know howard is coming back at 1st I’m curious to see what sandberg does at leadoff( which should be revere) i want to see if he is pressured to put the crybaby back to pacify him while we have to watch him strikeout,pop out, swing first pitch just plain fok things up, like it aint foked up enough!

And really who names a kid Casper!!

At what point does Sandberg make the lineup decisions for the team?

And therein lies my point. How can you give this guy a “try out” unless you let him manage the team? Amaro needs to get the eff out of the way.

I agree 100% Bugs.. But right now, it’s Amaro circling the wagons nad trying to cover his own Ass with Ownership..
Sanberg will not get any real Authority until next Spring (if he’s even around that is.. Sandberg, may say chicken shit to even want to work with Amaro and would have other option’s) What a Mess the Phils have become..