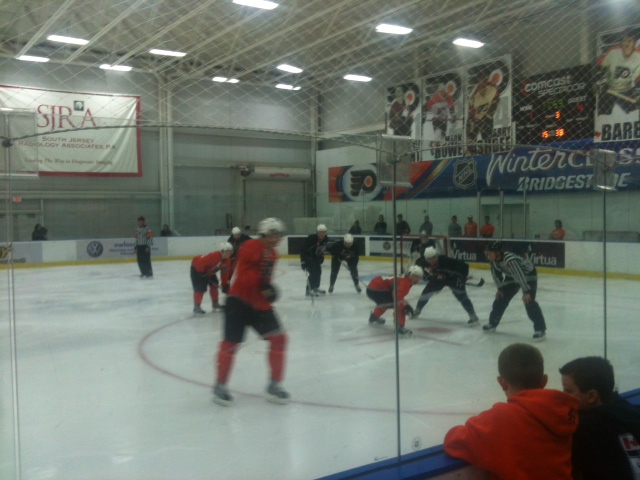 The Philadelphia Flyers kick off their short rookie camp on Friday, leading up to the opening of the 2013-14 NHL training camp on September 12. The organization released a list of all invited players last week, with twenty NHL prospects, one player on an AHL deal and five undrafted players.

Although Ian Laperriere (now the Flyers’ Director of Player Development) adjusted the development camp in July to focus less on gameplay and more an professional development, the rookie camp should be of a more game-driven environment. The annual Flyers/Capitals rookie game will take place on Monday as well, at the Kettler Capitals Iceplex.

Many of these players will be looking to impress management early to potentially earn a call-up if the big club has an opening, and at least five are looking for a contract.

The following aren’t necessarily the “most important” players to watch during camp, but players that I’d be curious to follow as camp continues.

I was asked in April by the wonderful blog Flyers Faithful to participate in their “Five Questions” series, including a question on “who will be the 2013 surprise rookie?” Noebels was my choice.

It’s not that I’ve personally scouted Noebels before and think he has the elite talent to break into the NHL. What raised my curiosity was that the organization signed him to an NHL contract within weeks of drafting him in 2011.

Noebels, 21, is a 6′-2″ forward left winger who made the jump from juniors to the professional level last season. He began his career at the ECHL level with the Trenton Titans and joined the Adirondack Phantoms around the time that the NHL returned from the lockout. He scored 11 goals and 30 points in 31 ECHL games before adding 13 goals and 23 points in 43 AHL games.

Tye McGinn holds rank over Noebels on the depth chart, but if McGinn can’t win a roster spot on opening night and falters at the AHL level, the organization could easily pass him up and let Noebels get his feet wet sooner rather than later.

Whereas Noebels was signed almost immediately after being drafted, another former fourth round draft pick is still trying to earn his own contract. Leier, 19, was stuck playing in the bottom six of his Portland Winterhawks team when the Flyers drafted him, but moved to the second line last season. He finished his junior season with 27 goals and 62 points in 62 games played, while adding another 9 goals and 16 points in 21 playoff games.

The Winterhawks are kind of like the Red Wings of the WHL; they are constantly finding top players to restock their shelves (amidst player tampering fines…) while regularly making the playoffs like a well-oiled machine. As impressive as Leier’s production was, his teammate Brendan Leipsic (drafted 28 spots earlier at the 2012 draft) finished this past season with 49 goals and 120 points (!).

Leier is a littler shorter than average, with a listed height of 5′-11″. He is going to have to prove that he at least has other intangible skills beyond goal-scoring if he’s going to earn a contract, as the organization needs to at least know he can function as a bottom six forward.

… Which brings me to Tyrell. I was critical after the 2013 NHL Entry Draft of the Flyers’ use of a 3rd round draft pick on a player that didn’t project to be more than fourth line forward (at best) at the NHL level, but the organization’s excuse was that they would rather draft a player with a realistic ceiling than a boom-or-bust player with a much higher ceiling/higher risk.

I still think that’s a terrible argument to make, and the fact that the organization had to release two news stories justifying it should say enough.

Regardless of that decision, I’m curious to see how Goulbourne stacks up to his fellow prospects and just what to expect from him in the coming years. Hopefully he works out better than former third-round bust Garrett Klotz.

Both Chubak and Flyers prospect Kyle Flanagan were nominated for the Hobey Baker award last season, which is given to the NCAA men’s ice hockey player of the year. Chubak played goaltender for a relatively small college- Niagara University- and was limited to just 10 games in his first two seasons. In his senior year, though, he backstopped the team to a 23-6-5 record with a 0.938 save percentage.

Chubak is on an AHL deal, so he won’t be able to play for the Flyers next season. He is also likely to start the season in the ECHL with the Greenville Road Warriors, as the Flyers already have two AHL goaltenders in Cal Heeter and Yann Danis. Still, it will be interesting to see if his record in his final year at Niagara is reproducible at the professional level. If it pans out, the Flyers can add another quality goaltender to their limited crop of goaltending prospects.

Harper is one of the five undrafted players at camp, and one of two players who previously attended the development camp. Harper was projected as a third round pick for the 2013 NHL draft last fall, but a weak second half of his junior season prompted all thirty teams to take a pass for now.

Harper plays like a power forward, but hasn’t shown the consistency or two-way play that would be indicative of a top hockey talent. He has shown ample leadership qualities at the junior level, taking in future top prospect Connor McDavid under his wing with the Erie Otters.

The Flyers have the space to sign him or any of the other undrafted forwards if they so choose (with extra room if they don’t re-sign Simon Gagne). Harper would have to have an unreal rookie camp that continued through the Flyers’ regular training camp in order to earn that contract, though, so it won’t be easy.