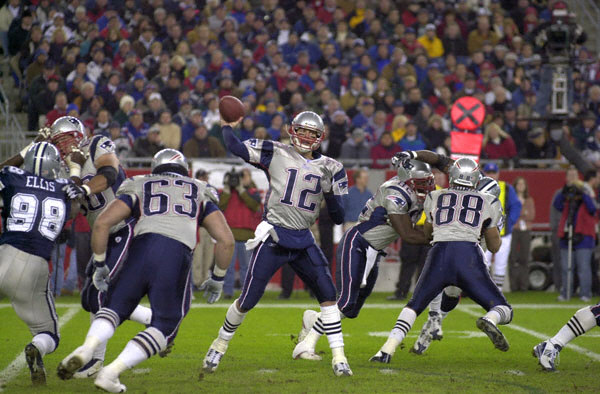 The Patriots didn’t look right against the Buffalo Bills last week. Tom Brady struggled to get in sync with his revamped receiving corp, and the offense kept the Bills in the game by turning the football over. New England managed to eek out a victory with a late field goal from Stephen Gostkowski, but it was a concerning performance to say the least.

Last week the Jets won ugly on a last second field goal of their own, made possible by an absolutely foolish penalty by Tampa Bay linebacker Lavonte David. Geno Smith had a decent NFL debut, throwing for 256 yards with a touchdown and an interception, but the Jets failed to get anything going on the ground, with Bilal Powell and Chris Ivory combining for 44 rushing yards 22 carries.

What A Difference A Few Plays Makes For Cary Williams

I see it now! Geno Smith’s Flaws are more Genetic. He’s got Small hands!!!! That’s one the reasons he was under throwing the receivers. I know for a fact he has the Arm but He is not good for the NorthEast . Better get some Stickem. These scouts check everything. And one of his flaws were hand size. He had the smallest hands out of all the top prospects coming out of college under 10 inches (9.38)palm to long finger they said this would hurt him with ball protection and bad weather .Wow I saw the thesis ..
Google his hand size. He can’t grip a wet ball. Sorry Jets fans.

That was an ugly game. Holy crap. It was unwatchable. Haven’t seen the Pats offense look that bad in years.

The AFC is really Weak this Year….
The Bronco’s .. then maybe the Texans and maybe the Colt’s and that’s about it ..The Ravens,Steelers will struggle to be .500 Teams this Year..
The Chiefs,Dolphins,Bengals will all have a good chance to make Playoffs