Kelly Needs To Involve More Of His Weapons 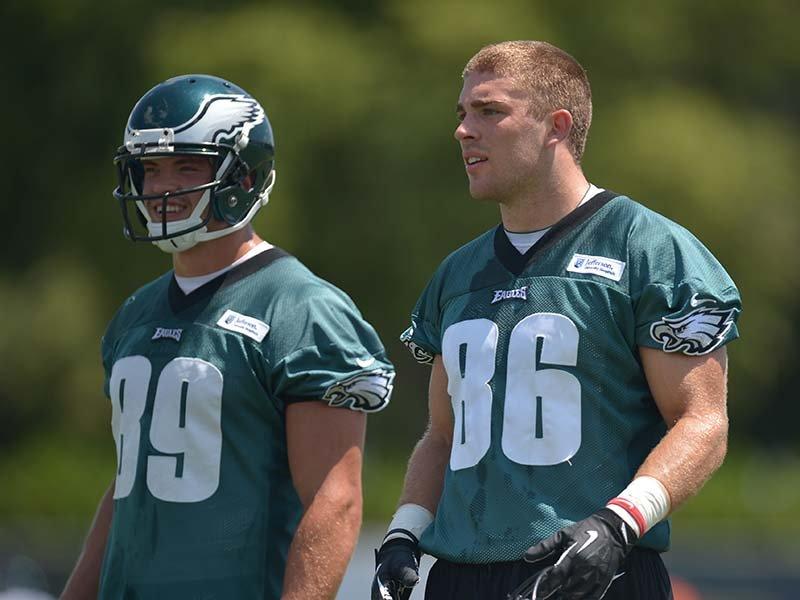 One criticism I have about Chip Kelly’s offense through the first three games is that it has essentially been a three-man show.

Kelly has asked LeSean McCoy, Michael Vick, and DeSean Jackson to do almost all of the heavy lifting to this point, while using the other offensive weapons sparingly. As the quarterback, its certainly to be expected that Vick would be heavily involved in the offensive gameplan, but the numbers at the skill positions have been extremely skewed towards McCoy and Jackson through three weeks, and its something that I think needs to change moving forward.

Of the 85 rushing plays that the Eagles have run this year, 62 of those carries have gone to McCoy. 18 of them belong to Michael Vick, and the remaining 15 are Bryce Brown’s. Its understandable that the Eagles want to make McCoy the focal point of the offense, but its also been discussed several times since the beginning of the year that Kelly has got to trust his other running backs or he’s going to run the risk of overusing McCoy.

We know that Bryce Brown can be a very electric runner, and I think he’s got to get more than five carries a game. Brown has struggled running some of the draw plays that McCoy has thrived on, but Kelly being the offensive innovator that he’s hailed to be should be able to design plays and packages that suit Brown’s skillset and put him in a better position to succeed.

The team hasn’t given Chris Polk a single snap with the offense through three weeks. Polk was ahead of Brown on the depth chart at one point this summer, and he had a strong preseason, excelling in pass protection and also showing that he could do a little damage with the football if given the chance. Why not the give the second-year man a look or two here and there to see if he spice things up a bit?

In the passing game, DeSean Jackson leads the team with 19 receptions for 359 yards and two touchdowns. That’s all well and good, but again he’s really been the only receiver that Kelly has attempted to feature to this point. Jason Avant is the only other wideout on the roster with more than 10 catches.

While the Eagles may not have great talent to look to for increased production at the wide receiver position, they do have the talent at tight end. The tight ends have been shockingly underutilized so far, with Brent Celek, Zach Ertz, and James Casey combining for just eight catches for 148 yards and one touchdown so far. When Kelly built this team in the off-season, all signs seemed to indicate that he was going to scheme around a lot of two tight end sets. He invested a lot of resources in the position, spending a high second-round pick on Ertz and throwing $12 million at Casey (who doesn’t have a single reception in three games and was only on the field for one play against Kansas City).

The Eagles offense has looked great at times through the first three weeks. The fact that they’ve done so without using all of their offensive assets available to them makes me believe that they’re capable of doing a lot more than what they’ve been showing to this point. But its up to Kelly to break the chains on some of these guys and spread the ball around. Leaning on McCoy and Jackson will only work for so long. Its time for the head coach to really start making use of some of the weapons he brought to this offense.

Where’s Danarus Johnson been,
A couple of bubble screens, reverses,
Utilize Johnson like the Chargers did with Eddie Royal or the Chiefs with D Avery.. Get him the ball a few times a game out in Space and see if he can nake some plays.. A real “Offensive Genius” like many have called Kelky would figure a way to have 6-7 Players on Offense get some Rouches and not rely on the big 3 as you and I have mentioned for 2 weeks now..
Spread the ball, make the Defense have to account for everyone in the field
Right Defenses will do 1 or 2 things..
Either focus in McCoy which the Chargers did
Or focus on D-Jax as the Chiefs did
Unless the Big 3 all have strong games, the Eagkes won’t win, so they have to get these other players involved for a more balanced attack

Ya, a bit of a head scratcher at this point?? A lot of money invested on Casey and Ertz, and very little to show for it. Coulda signed/drafted 2 DBs instead and made do with Celek and Harbor. I guess I am beating a dead horse here though…….it is early, maybe we see more TEs hopefully in the upcoming weeks.

Not really that much of a head scratcher to me…..This is what happens when you overvalue, or overrate talent; your expectations become fantasy, and when reality hits that they really aren’t what you thought they were….that’s when disappointment and frustration set in.

This is what has happened in the case of Casey, and Ertz. But there are other examples that are similar:

WR’s like: Stephen Hill, Michael Floyd, Kendall Wright, who some thought was better than DeSean Jackson, before he was drafted. See what I mean by fantasy?

Who else you got?…….my misfires, are far and few between, but as you can see I’m more right than I am wrong. How about yourself? You too wanted some of these bust…….You too, felt some of these prospects were better than they were, as well as Howie, and Andy.

Who else didn’t I like that seems to be excelling? You have nothing.

How many times are you gonna keep sticking your foot in your mouth?

in the red zone inside the 10, DJax should be taken out of the game —

Denny, 20 carry’s a game is overusing him? Really? That’s ridiculous! Reid ran him an average of 16 times a game last year and you and everyone else was saying he was underused, I guess 18 would be the perfect number lol. I do agree ( a first lol) about getting more players involved, what was the purpose of getting Mr. Hybrid James Casey if your only using him on special teams? I was expecting 3 TE sets where your gonna have the D Totally mismatched. Lets hope he starts getting to that point soon, Lets not forget, this system is brand new to these players, maybe their not up to having those plays down yet on the field. I believe we didn’t see half of what Chip has in store with this O, by mid season, when the players have this system down pat, your going to see something special!

I think WR’s Chad Hall and Mardy Gilyard are on the streets looking for work.. I just sent their Agents & GM Roseman a Text Message

then you would also agree that we didn’t beat the redskins as they had 3 turnovers, a fumble in the endzone costing them a safety and a missed field goal? you guys are ridiculous

Cary Williams 2nd half interception in Washington was a great talent turnover (excusable ) but that RG3 pitch to Alfred Morris in the end zone was not.
Eagles vs. KC the Kelce fumble and Damaris muffed punt are inexcusable. Additionally Mike Vick has used up his 9 lives with the philly fan base concerning turnovers.

The difference is, Were beating the Redskins without those turnovers, KC doesn’t have a chance without our turnovers. Your Ridiculous!!

Wrong Andrew,
Redskins turned it over 3 times out of their first 6 Offensive plays of the Game and actually had a 7-0 Lead (after the behind the line pass TD return from DeAngelo Hall)
It was the Morris Fumble, then the bad throw by RGIII over the middle of the field which his receiver was covered by 3 Eagle’s Defenders and then the Safety Play …

All I have to say is I can’t wait for Vick to be off this team he’s too inconsistent they should of let Foles be the starter for the season and see if he’s a franchise QB.

If Foles were the QB he would get more of the weapons involve the only player who would be mad is Deshaun Jackson. You see what Tom Brady and Peyton do they throw short passes all game long when Foles was doing that in the preseason everyone was saying you gotta throw down field and take chances. The offense is suppose to be about taking what the defense gives you go no huddle, get to the line of scrimmage, read the defense and throw to the Mitch Match or run the ball.

Good article Denny, I completely agree buddy. Chip needs to use all of the weapons at his disposal. Three tight-end sets would be a big boost against opposing defenses especially when they’re shutting down our wideouts Kansas city did against us.