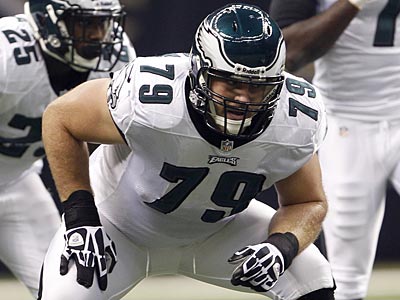 The Eagles offensive line is one of the keys to the success of their season and they must play much better than they did last week against the Kansas City Chiefs.  Yes the coaching staff was disappointed in the play of rookie Lane Johnson, who was beaten for three sacks, but they expect that from a rookie.  Jason Peters has his problems with an injured finger, but they expect the hand to improve.

What they’re really getting frustrated with, is the play of veteran right guard Todd Herremans.  He hasn’t had one game in which he has consistently played well for the entire four quarters.

Pass blocking at the guard position isn’t a tough job, but Herremans has been beaten numerous times in just three games.  Herremans has made some good run blocks this year, but even in that area, he hasn’t been consistent.

A NFL source told me there have been conversations about replacing him at right guard  with Allen Barbre.  I wouldn’t say a change is on the verge of happening, but it’s been discussed and considered, so it’s important that Herremans gets things turned around.

The Denver Broncos don’t have a dominant defensive front, so the Birds should be able to handle them.  Their best defensive player, pass rushing phenom and outside linebacker Von Miller is out of action due to a suspension for using an illegal substance.

Two Key Matchups When The Broncos Have The Football