Eagles Slow Secondary Will Give Up Big Plays 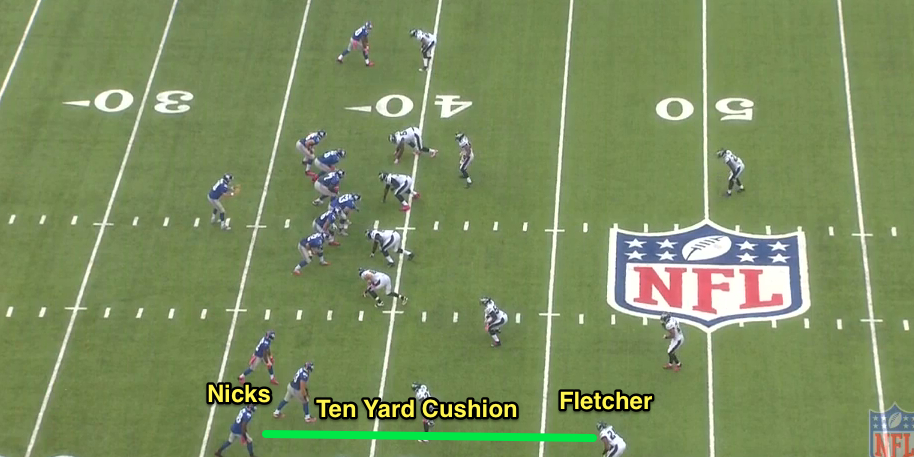 The Eagles defense came up with four turnovers on Sunday and that proved to be the difference in the game, because Nick Foles and the Birds offense was able to put the ball in the end zone after two of those interceptions, but going forward I want you Eagles fans to know that our defense is going to be giving up points.  They’re going to give up yardage and points.

We just don’t have tremendous personnel in the secondary.  We need a more consistent pass rush, but we’re still going to give up yardage.  Our two cornerbacks, Bradley Fletcher and Cary Williams are both capable of getting physical with receivers and also coming up and tackling, but neither of them is very fast.  They can’t run with the barely above average deep threats in the league, so you know they’re going to have trouble with the truly speedy receivers in the league.

Let me give you an example by showing you a play which happened on Sunday.

Take a look at this deep pass play in the first quarter of the Giants game.  Our left cornerback Bradley Fletcher is lined up ten yards off of Giants wide receiver, Hakeem Nicks.  Ten yards is a big cushion on the NFL level.   In other words, you shouldn’t be getting beaten deep, if you have a ten-yard cushion.  You’re only supposed to be giving a ten yard cushion to somebody who runs a 4.4 or 4.3 forty yard dash.  Nicks has good speed by not great speed.

When the ball in snapped, Nicks comes out heading straight down the field on a go route.

He immediately closes the ten-yard cushion with no trouble.   Regardless, Nicks goes by Fletcher and catches a 42 yard pass for a first down.

What’s so bad about Fletcher getting beaten deep on that route, is the fact that the play before the long connection with Nicks, Giants wide out Rueben Randle had gotten behind him for what would have been another long completion.  This is going to happen from time to time because Fletcher and Williams are going to lose most of the foot races they get into with the speedy wide receivers in the NFL.

Teams are going to be able to move the ball against this defense because they don’t have the most talented secondary, but they can make up for it, by forcing two or three turnovers a game.

Eagles Started Running Pick Routes In The Second Half

Thanks for the report G. This entire defensive backfield is below average for the NFL. The corners lack the speed and cover skills for press coverage, and the safeties do not show an aggressiveness and ball-separating hits that intimidate recievers. That is not a good combination….and then you add the lack of a consistent pass rush, and you have the recipe for a poor defense that will be highly scored upon.

Billy Davis has not given me confidence that he can scheme to overcome a lack of talent on defense. We have seen that our offense has greatly improved its scoring this year, but ultimately it will be our defense that determines how far we will go.

I look around the NFL and see about 5-6 Good Secondaries this year
Seahawks, 49ers, Bears, Chiefs, Steelers, maybe the Colts & Dolphins & Jets And still these Teams have given up big Plays and a lot of points in some of their Games ..

Vincent Jackson and Mike Williams up next.
who is Tampa’s slot?
what kind of speed does Mike Williams have? I know he is big like NYG’s Nicks and Dallas’ Dez Bryant does he have speed also.

the only other Tampa wide receiver that has a reception besides Jackson and Williams is a 5’10” rookie out of Toledo named Eric Page who has 3 catches. The buc passing game looks lethargic. When trying to locate who was their slot I noticed Russell Sheppard made their roster but has yet to make a catch.

Tampa Bay’s 3rd/4th Receiver’s are Chris Owuso & Taj Underwood who played for Schiano at Rutgers are not really the smaller,speedy type ..
Tampa’s passing attack doesn’t really use the Bubble Routes, or Drag Routes where a smaller,quick Reciever releases under the linebacker coverage like many Teams have and that have cause big problems for the Eagles so far in 2013, instead, they will throw a lot to their RB’s Doug Martin and Mike James and even Fullback Brian Leonard (another Rutgers Grad)

Key for Eagles Defense is to get to Doug Martin before he gets out in space and keep him running vertically instead of North & South..
With a rookie QB Glennon playing in his 2nd NFL Game, Eagles need to pressure,blitz and give him many different looks right out of the gate to get him unneverd and moving around .. He does have a big arm and Tamps Recievers Jackson & WIllimas are more or less, straight down the field Route Runners and Deep Outs and Williams will run a nice Deep Post route a few times a game.. Eagles CB’s need to play physical for neither Receiver is a pure speed burner, but use their size,leaping ability and have good hands to make tough catches in traffice… Jackson loves to run that stop & go Sideline Route up the left side.. Safeties need to be out wide but the numbers to get good angles on playing the ball
Tampa does not really have a legitimate TE threat who can split the field and run routes down the seams as most Teams.. This should help the Eagels to key their Secondary on the outside with Jackson & Williams