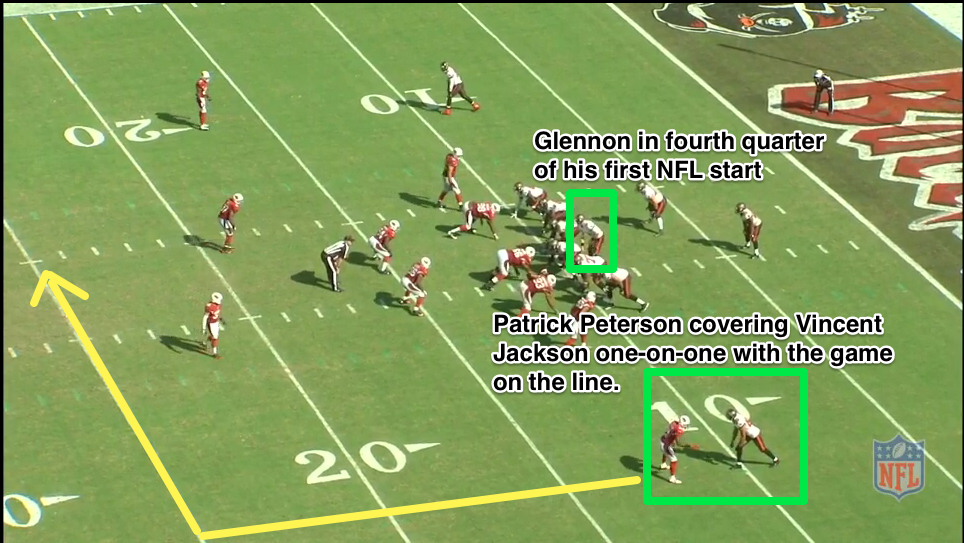 The Eagles will be facing a rookie quarterback, Mike Glennon, on Sunday when the Birds play the Buccaneers in Tampa Bay.  They’ve got to get after him early because the youngster is probably seeing ghosts right now.

In the fourth quarter of his first start, with his team leading 10-0, the Glennon-led Buccaneer offense turned the ball over three times to let an awful Arizona Cardinals team beat them in the last seconds of the game.  Glennon threw two interceptions in a span of three-minutes that cost Tampa Bay its first win of the season.

Glennon can’t have a great deal of confidence right now.  Defensive coordinator Billy Davis and the Eagles defense needs to make sure that he doesn’t get any more confidence.

On the first interception with 3 minutes to go on the clock, Glennon dropped into the pocket and stared down hjs number one receiver Vincent Jackson as he ran a crossing route at about 15 yards deep.  Jackson was being covered by one of the best in the business, Cardinals Pro Bowl level cornerback Patrick Peterson.   Peterson was draped all over Jacskon and seemed to be running the route for him, while waiting for the rookie to make the mistake.

The youngster stepped up in the pocket and let it go as if he didn’t even see Peterson hanging all over Jackson.  He had to know this was an awful mistake when he let the ball go.  Peterson stepped in front of Jackson and picked the pass off to set up what would be the game tying score.

On the second interception, Glennon was off target on a throw to Jackson and Peterson picked it off as it sailed over the receiver’s head.  It was like taking candy from a baby for Peterson as he came down with two interceptions in the last three minutes of the game to keep the Buccaneers winless.

This young man has thrown the ball only 43 times in his career so far and he has completed 24 of them for 193 yards with one touchdown and two interceptions.  He’s still wet behind the ears, but Glennon has a strong and accurate arm, but very little mobility in and outside the pocket.

Tampa Bay coach Greg Schiano seemed to be trying to keep things safe for him by taking few chances with his play calls.  They’re going to be intent on keeping him out of third and long situations, by running the ball on first and second downs with Doug Martin.  The second-year running backs is short, strong, quick and determined.  He runs with an attitude and will break tackles, so the Birds need to get more than one or two guys in on the tackle.

After the two picks in the fourth quarter against the Cardinals, he’s still wondering whether he can play at this level or not.  They can’t let him get things going and get his confidence up.

If was Eagles defensive coordinator Billy Davis I would run a corner blitz from his blindside and try to frighten him at the start of this game.  I don’t want to see the Birds come out and play a lot of loose zones and let him reestablish his confidence by throwing check downs to Martin.

If the Birds can stop Martin and the Eagles offense can stay away from turnovers, Glennon is going to have a very tough time, leading the Buccaneers to the end zone.

Tampa Bay Will Be A Good Test For Nick Foles