The Eagles Aren’t Getting Much From Their Offensive Line 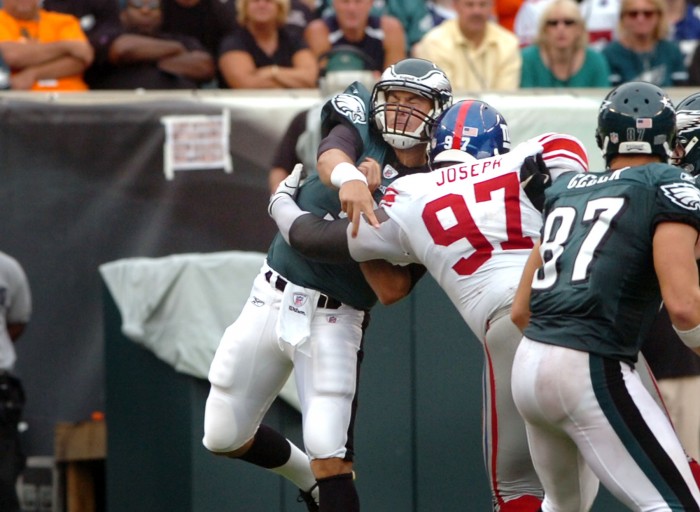 Think about it, LeSean McCoy could only run for 48 yards in 15 carries, but that’s not a major story.  This team went into the game with a quarterback who wasn’t 100%.  Chip Kelly wanted to be able to let the running game lead the way, but he couldn’t do that with an offensive line that was losing the battle upfront.

Kelly who majored in the running game, was unable to find a way to get McCoy free for some yardage.  It’s impossible to do with the big guys up front getting their butts kicked.

Yesterday the New York Giants defensive line dominated the Eagles front five.  They have problems with Giants big, physical front four the last time they played, but some first half runs by Michael Vick in that earlier game and in the second half the defense forced a few turnovers and Nick Foles led the Birds into the end zone.

That covered the poor play from Birds offensive line which has lost its mojo.  Everybody pointed to center Jason Kelce because of a stunt the Giants were running, but the entire offensive line has been going in the wrong direction.

Veteran right guard Todd Herremans has been awful and yesterday he was being dominated by Giants defensive tackle Linval Joseph and the other New York defensive tackles.  Herremans isn’t coming close to getting the job done, there’s no other way to say it.  He gets beat too often in both the run and the passing game.

I understand the inexperience of rookie offensive tackle Lane Johnson, but he was letting New York defensive end Justin Tuck fly by him into the Eagles offensive backfield and make tackles on inside running plays and even runs to the team’s left side.  Johnson needs to become more consistent.

On a regular basis, I’ve seen him get overpowered and pushed into the backfield.  The Birds had him pulling to the other side on a play yesterday and one of the Giants linebackers pounded him in the hole and he came to a complete stop.  There’s no way Peters, who is in the 340 pound range, should be letting a 240 pound linebacker stopping him.

I didn’t expect much out of center Jason Kelce in his matchup with the Giants big defensive tackles, but he’s got to at least get a draw.   New York is deep at the position with big bodies such as Joseph, Cullen Jenkins, Shaun Rogers, and Mike Patterson.  The Eagles interior offensive line of Kelce, Herremans and Evan Mathis couldn’t get any movement with the Giants defensive tackles.

The Eagles don’t have quarterbacks and receivers, who are good enough to carry the team’s offense.  If they don’t have a dominating running game, they’re not going to be able to do much offensively, especially with Vick at less than 100%, Nick Foles battling back from a concussion and rookie Matt Barkley possibly taking over the starter’s role.

The Eagles offense isn’t doing anything without a dominating running game.

No Run Threat At QB, No Cutback Hole, No “Shady McCoy”