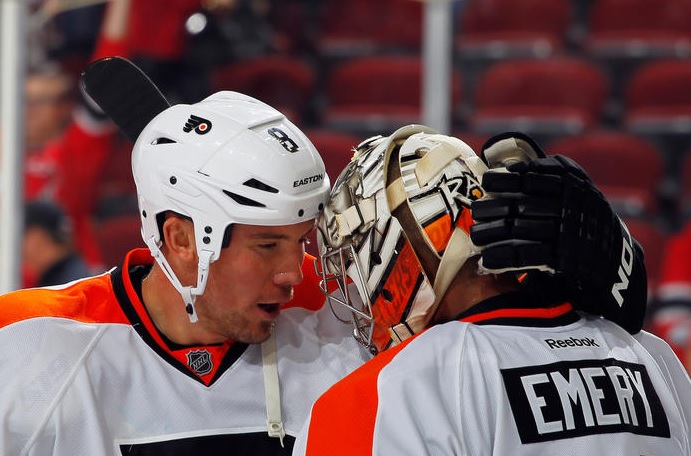 Ray Emery’s beatdown of Brayden Holtby in the Philadelphia Flyers’ 7-0 loss against the Washington Capitals was the talk of the NHL for much of Friday evening and Saturday.

It prompted yet another round of discussions about fighting in hockey along with reactions from players around the NHL.

Eddie Lack, Vancouver Canucks goaltender: “About all the Ray Emery questions, no I wouldn’t stand a chance.”

Roberto Luongo, Vancouver Canucks goaltender: “Just an FYI. If Ray Emery ever decides to skate down the ice and try to fight me I’m getting the f*^k out of dodge!!!”

Frederik Andersen, Anaheim Ducks goaltender: “It didn’t seem like Holtby really wanted to fight. He didn’t see a point. I agree with that.”

Dan Carcillo, Los Angeles Kings: “He’s probably the toughest goalie, but if he ever fought me, I would dust him, and he knows that.”

“That’s primal instinct. That’s a group of guys that are getting beat 7-0, they’re pissed off, their record isn’t great. The organization is probably a little frustrated. Philadelphia is one of the most respected franchises in hockey history. It’s not a disgrace to the game. Our game is rough, our game is not played by nice guys. Yeah, there is sportsmanship and everyone has respect, but when you get down 7-0, that’s what makes us hockey players. They’re not going to sit there and be like, ‘Oh, you can just run seven goals up on us.’ No, we’re going to come out and we’re going to get back in your face, and there were a couple of fights. Do I agree with Emery skating down the ice and laying a beating on the other goalie? I mean, the guy didn’t really look like he wanted to fight. It’s happened before, it’s not the first time goalies have teed off on each other. Ron Hextall and Felix Potvin had one of the best fights ever. There have been tons of goalie fights. Yeah, it was a little bit shady that Emery went and took on a guy that… would [people in LA] want to see, somebody like Clifford or Carcillo or Nolan, grab Paul Kariya and lay a beating on him. [MM: Actually, some might want to see that, yes.] Henrik Sedin then. There would be an uproar. But it’s two goalies, and no one is really familiar with goalie fighting. It was a shady move by Emery to continue to fight and wail on the guy. But that being said, you go on the ice, you don’t know what’s going to happen. I don’t know whats going to happen, that’s what you risk. You get paid so much money, you can’t be like, ‘Oh, let’s all play nice.’ It’s hockey. You risk being beat up every time you step on the ice. So, was it a disgrace? I’m not going to say it was a disgrace. It was a fight. It was a shady move by Emery.”

It turns out that the NHL has specific rules in place for just this type of situation. That is, a player is allowed to assault another unwilling player up to two times per season before they should be warranted further discipline. The blog Broad Street Hockey covered this in more detail earlier today.

I’m not a fan of this rule and don’t suspect it will remain intact beyond this season, but a rule is a rule. No point in arguing about it further.

With all of the criticism directed towards Emery and Steve Mason legitimately needing a break, the Flyers decided to show solidarity with Emery by starting him against the New Jersey Devils. Hal Gill made his Flyers debut and was joined by Andrej Meszaros, while defensemen Erik Gustafsson and Luke Schenn sat in the press box.

Through three periods, the Flyers held the Devils to just 14 shots and grabbed two points from another awful Metropolitan team.

The Flyers now have four wins on the season, with a 4-8-0 record and are somehow out of the playoff race by six points with 69 games remaining.

As nice as it was to not be completely embarrassed by the team, this doesn’t really change anything. The final score was 1-0 and could have very easily been 5-1 against a marginally more competent team than the Devils.

The Flyers play another weak Metropolitan Division team, the Carolina Hurricanes, on Tuesday before welcoming the Devils back to Philadelphia on Thursday. The Edmonton Oilers, the last place team in the Western Conference, will be in town on Saturday.

The landscape for the Flyers could change on paper if they’re able to remotely step up their game in these very winnable games, but it still seems pointless to ponder without any personnel moves.

Hockey has some messed-up rules. You’re basically allowed to put an unwanted beat-down on another player twice a year before they bring in a shrink to find out why you’re attacking a guy that just wants to play a game and earn a living.

The Flyers are scumbags.