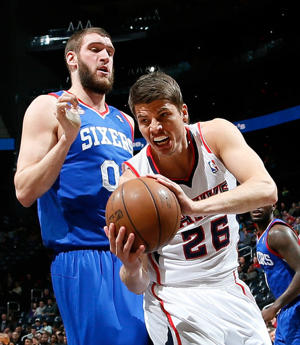 The Philadelphia 76ers lost their match with the Atlanta Hawks on Friday night 113-103. Their record drops to 5-5.

Sam Hinkie has made a lot of smart decisions since taking over as the Sixers’ general manager.

But he may have made a mistake when he decided not to pick up the option on Evan Turner’s contract for next year.

Right now Turner is looking like an early candidate for most improved player. He’s scored 20 or more points in nine of the Sixers’ 10 games this year. Its still early, and this is a very small sample size, but Turner is finally beginning to look like a pretty good NBA player, and seems to flourishing with the new head coach Brett Brown.

It will be interesting to see what Hinkie ultimately decides to do with Turner.

Can he still be a part of this team’s future?

Or is he destined to be dealt at the deadline for expiring contracts and future draft picks?

Right Now, Nick Foles Has The Keys To The Car