Right Now, Nick Foles Has The Keys To The Car 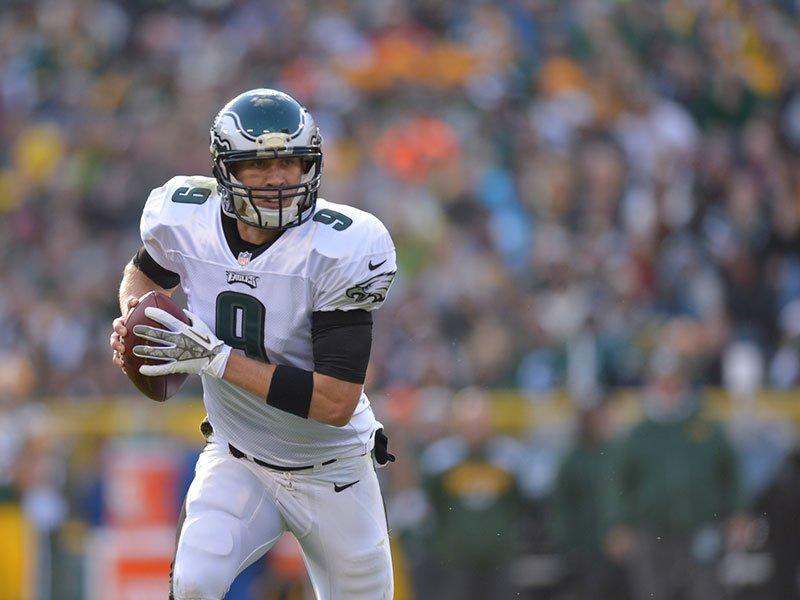 The stage is set for a dramatic ending to the Eagles season with second-year signal caller Nick Foles leading the Birds down the stretch.  They have  a legitimate shot at the NFL post-season.  The Eagles are five and five and tied for the lead in the NFC East with the Cowboys, whom they play in the final week of the season.

They’ll be battling the Redskins tomorrow, and Foles will get the opportunity to continue his amazing run against one of the league’s poorest defenses.  He should have another big day against the Skins mediocre secondary.

The team drama may have to take a back seat to the Eagles quarterback drama, which centers around Foles, who seems to be the unnamed Birds starting quarterback the rest of the season.  Chip Kelly won’t say the job of Foles’ but everybody knows it.

The former Arizona Wildcats has been performing and producing at such an amazing level that he has to be asking himself, “Is this real or Am I dreaming.”  Remember that Foles was sitting the bench for much of the season, but if the Pro Bowl voting were this week, I don’t see how they could leave Nick off the team.

Think about it, Foles is just in his second-year and he’s already got his jersey in the Hall of Fame and he shares NFL records with Peyton Manning and Tom Brady.

The Hall of Fame level of accomplishments of Foles has made me start to lean toward building this team around him.  We’ve got to let the season play out, but should Foles lead this team to the playoffs, it would put Chip Kelly and company in position where it would be nearly impossible to draft another quarterback early.

Like everybody else, I have been focused on evaluating Foles’ skill set, which starts with his good but not spectacular arm, and his lack of footspeed, and his tendency to put too much air under the ball on his deep throws.

I’ve gotten to the point where I don’t want to see or read any more evaluations of Foles.  Football isn’t about evaluations, it’s about results and Foles has getting the job done.  We will all see whether he can keep it up.

Everybody refused to acknowledge the accomplishments of Drew Brees early in his career because he was too short.  I remember when Joe Montana wasn’t taken seriously because his arm wasn’t thought to be strong enough.

The more I’m around Foles, the more his intangibles shine.  The young man has tremendous composer and he sees the entire field very well.  This is an underrated ability at the quarterback position, which is priceless.

I’ve been told that Foles communicates very well with all of his teammates in the huddle during the game.  The youngster is extremely bright and he does something that means everything.

He makes his teammates better, which is what the best players in the league do.  Look at what Foles has done for wide receiver Riley Cooper.

Cooper was unable to make any big plays during his NFL career, but with Foles in at the quarterback position, he’s shown that he still can’t outrun most of the league’s defensive backs, but he is able to outfight them for the football when it’s in the air.

Who was it that brought out Cooper’s abilities?  It wasn’t Kelly or Michael Vick, it was Foles, who discovered what Cooper could do.

Foles has talked about how he believes in Cooper and is willing to throw the ball up in the air to him because of his confidence in him.  Cooper hasn’t let him down.  In the last two games, Cooper has 8 catches for 241 yards and five touchdowns.

The emergence of Cooper will do nothing but open up more opportunities for DeSean Jackson, Brent Celek and Zach Ertz.  Foles and Cooper are doing it in an unconventional way, but who cares as along as it’s working. Cooper looks like he’s covered, Foles looks off the deep safety then throws the ball up to the wide receiver and he goes up to make the play.

It’s still very, early in the young quarterback’s career.  He must continue his success and we’ve got to sit back and watch this whole thing play out.  But right now he’s passed every test with flying colors, so I’m on Foles side to make him the man here in Philadelphia.

Kelly won’t say this, but I think Foles has the keys to the car, right now.  The Eagles quarterback job is his right now and it will remain his just unless he loses them.  Now, not only has Vick been eliminated from the contest, but those quarterbacks who are coming out in the draft are in trouble as well.

Glad to see your finally coming around to Foles G, up until this post you really weren’t in his corner, which is understandable, but, like you said, you can’t keep on judging him on intangibles, it’s all about the bottom line, and right now the bottom line is, this kid knows how to get it done.

Foles is ready. Let vick stick around as backup which I think he will accept and continue to develop barkey. Vinny curry has been inactive for games, hasnt started 1 game, and leads the team in sacks.

Foles is our guy and he is playing fantastic ball. Keep it up kid Cause I would love to have 10 years of guessing if this is the week you throw for 8TD’s

Better late than never. But please caution the enthusiasm. There’s probably still a clunker out there (I don’t think this week – maybe Chicago) where the kid is going to struggle.

I’m also a little worried about the 0 ints. The law of averages say he’s going to end the season with around a 2% int rate (was his # last year). So a couple picks are bound to happen. Of course, being Philly, the media, and the anti-foles gang on here will immediately start in on the “See! See! Just a backup. Limited upside” posts.

What did I read today? Foles would have to throw 13 straight interceptions for his QB rating to fall to where RGIII is. Yet we know people here will overact the moment he throws 1.

Who doesn’t love that? This kid has brought hope and promise to the Birds. Most fans sense it. I think Kelly senses it. And I think his teammates sense it. There may be something special here.

Keep watching those graphs trend positively over the rest of the year. I expect that to happen.

Great article G. Evaluations be damned..Bottom line is results, this is all some of us have been saying on here, he gets the job done.

There’s a ton of pressure on Foles to keep performing at a high level. He can’t control what the defense does, but if he can continue to play well and avoid turnovers he could take us to the playoffs.

It would be hard to not give Foles the job if he takes us to the playoffs.

Irish this is Foles job to keep he shouldn’t be feeling anymore pressure then normal if he takes a step back Sunday it’s still his job. Vick knows it Kelly knows it and the locker room knows it. He doesn’t have to lead this team to the playoffs just show he can handle the job that’s it.

Eagles 4-2 over last 6 Games (All NFC Conference)
they are in.. They must beat the Redskins, Bears, Cardinals & Cowboys and would make it in at 9-7..

Great work G. Agreed… lets let it ride out and see what he can do. Tomorrow is big… home game against a div opp. Lets do this nick.

Vick’s inability to stay healthy opened the door 2 years in row for Foles. So far Nick has improved over his shot last year but he himself must perform while hurt. Come December and playoff time that is money time.