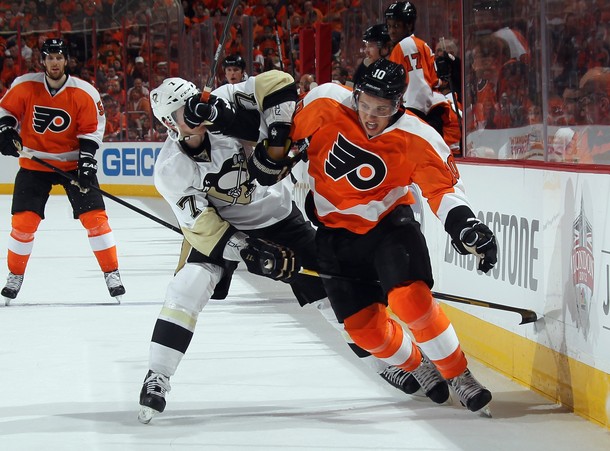 The Philadelphia Flyers’ season has taken a somewhat surprising turn considering how quickly the team was circling the drain in October.

The 10th place Flyers, facing the 14th place New York Islanders on Saturday night, are just one game below 0.500 with 61 games remaining on the schedule. They have won five of their last six games, with their one loss occurring in a shootout.

As refreshing as it is to see the team exhibiting an entertaining, competitive effort on the ice again, the problems on the back end haven’t disappeared completely as much as they’ve been masked by a stronger commitment to team defense from the offense and renewed goal support.

Rumors began circulating earlier in the week about Brayden Schenn’s potential availability as trade bait for a defenseman. It sounds as if the Flyers aren’t actively “shopping” him, but are certainly listening to offers.

This is basically Paul Holmgren’s job description, so that sounds less like a “rumor” and more like a “weekday.” The Flyers’ dismal start to the season probably led to him receiving many phone calls asking for any number of his forwards.

If Holmgren would in fact move Schenn for a defenseman… who are his realistic trade partners? I’ve reviewed each of the 29 other NHL teams to gather thoughts (and posted just the first 15 here for brevity).

Aside from the Tampa Bay Lightning, the Flyers won’t really face any “contending” teams until December. Holmgren isn’t the type of manager to pull the trigger on a trade quickly, so expect him to wait beyond this and next month to evaluate the talent he truly has in his roster first.

The remaining thoughts on trade partners will be posted tomorrow.

worth the wait, great read-
Is B. Schenn being shopped because they can’t afford him (cap) in the off-season ?
if DCAR finds out the Flyers had an offer from Edmonton for Coburn he is going to go on a Holmgren rant of incompetence, LOL. he hates Coburn.
No to Buffalo’s Myers – i don’t like that guy’s game for $500,000 let alone 5 million.
Question, with the new Hybrid- Icing does the importance in having huge defensemen like Sean Morin less important than before?
Watching Flyers now, winning 3-1 at the end of 2nd — Go Flyers! Matt Reid’s stick is blazing as is the whole club on this winning streak!

He’s played better of late. I do think (3) 2nd round picks, especially if they were from last year’s strong draft, would have been a fair return. Then again, without Coburn this or next year, who do they replace him with? Someone had to eat those minutes, and they haven’t found “the guy” who can replace them yet.

Again, he probably isn’t being “shopped” because they don’t *need* to move him. Between Giroux, Lecavalier, Schenn, Couturier and Laughton, though, they have the depth to move a center if it brings back a quality defenseman. So they’re probably listening to what offers are out there more than shopping. They will not have issues signing him in the offseason if they decide to keep him.

I think Myers, at 23, can rejuvenate his career. Just not in Buffalo. The contract is horrible if you’re going to take the risk, though.

Hybrid icing may eliminate the need to have fast defensemen to beat an opposing forward to the puck, but it doesn’t eliminate the need in general. The quicker, the better. Bigger defensemen may have better reach and better ability to play the body, but if they can’t skate, it’s irrelevant. Morin, thankfully, can skate.