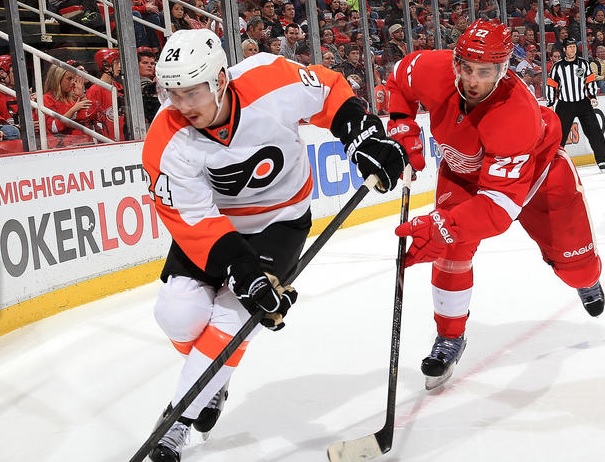 Talk to any hockey player in a post-game interview and you’re usually going to hear some combination of “lucky bounces,” “give credit to their goalie,” and “we need to play a full sixty minutes.”

Although the team defense has improved steadily over head coach Craig Berube’s tenure (the Flyers rank 10th in goals-against-per-game), the Flyers have not produced consistent sixty-minute efforts in many of their recent outings.

Some of that can be attributed to the ebb and flow of hockey games, but the opening 40 minutes against the Detroit Red Wings on Wednesday night looked awfully similar to the fruitless efforts in Minnesota on Monday.

When the Flyers fell 2-0 to the Wild, they had mustered just ten shots in a fairly lackluster forty minutes. They followed it up with a much stronger third period but ran into goaltender Josh Harding, the NHL’s leading netminder in goals-against-average.

The Flyers may have befallen a similar fate against the Red Wings if it weren’t for the continued dominance of the third line of Sean Couturier, Matt Read and Steve Downie. The trio accounted for four of the Flyers’ six goals en route to victory, extending their current road trip record to 2-1-0.

The Red Wings opened the scoring halfway through the first period, when Andrej Meszaros lost a battle at the boards behind the Flyers’ net. In his defense (or lack thereof), he held up his man for a solid eight seconds, which should have allowed nearby players Luke Schenn and Wayne Simmonds to get into better defensive positioning at the net. Once Meszaros’ man got away from his grip, though, they more or less stood by as Tomas Tatar skated just outside the crease and beat goaltender Steve Mason.

Steve Downie tied the game on the powerplay minutes later, scoring his first goal with the Flyers since being traded from the Colorado Avalanche. Downie is not typically used on the powerplay, but managed to make good use of his sole shift with the man advantage. Couturier and Read earned the helpers.

Johan Franzen grabbed the lead after defenseman Nicklas Grossmann misread which Red Wing to cover while Braydon Coburn was caught pinching. Just when the Flyers needed to calm down and regroup, they reacted with no less than four penalties to close out the period.

The silver lining in the parade to the penalty box is that the Flyers’ penalty killers were able to hold the Red Wings to just one five-on-three goal in that span. Give special teams credit, even if they should never have been in that position in the first place.

Matt Read was somehow able to find some even strength time in that span in which to cut the deficit to one goal (assists to Couturier and Scott Hartnell). It was nothing short of amazing that the Flyers went to the locker room short just one goal to tie.

Just as in Minnesota, the Flyers dug deep in the third period and finally reined in the disciplinary issues that were killing them in the second period. An early Red Wing penalty gave the Flyers their second powerplay of the game and captain Claude Giroux was able to snipe one past goaltender Jimmy Howard.

The Flyers could have fallen into a defensive shell at this point and hope to force overtime, but they continued pressing. Couturier skated to the net at the 8:28 mark and put himself in a position to bang home a pass from his linemates.

The Couturier-Read-Downie line has now combined for 27 points in the last ten games. For a group that regularly faces the toughest competition and zone starts, they can reliably drive the play forward and hold their opponents to limited goals. How much credit goes to Berube for their success is debatable, but a renewed confidence in Couturier (who finished the night with his first four-point effort thanks to an empty net goal) has been critical for the team to maintain any kind of footing in the standings.

It should be noted that the Red Wings were without the services of Pavel Datsyuk, Henrik Zetterberg and Todd Bertuzzi due to injuries. Detroit was literally short a top line and powerplay unit. I don’t think the Flyers leave Joe Louis Arena with any points if Datsyuk is available for any of the seven penalties taken over the course of the game (ignoring the pointless calls made after the game ended).

The road trip continues on Saturday with a game in Dallas. It is their first game against the Stars this season, a club missing top four defenseman Stephane Robidas and equal in the Western Conference standings to the Winnipeg Jets and Nashville Predators. The team should take advantage of the added day of rest before then, as they play four games in six days beginning with the Stars.

Where are all the people who called the Downie trade a stupid move?

and while I’m at it. How about all the Mason haters when that trade happened. Where are they all hiding?

I am right here about Mason.

Hindsight is 20/20 moose. There is no way that you could have predicted that Mason would play this well given his past in Columbus. He lost his job there because of inconsistency. Show me your posts when you predicted that Mason was going to play this well when the trade happened and then you can stick your chest out about how great you are. If you don’t have it then you can go back into hiding.

With Downie, I didn’t have any major issues with the trade, but was concerned whether some of his past on-ice behavioral issues would crop up again. His first game back with the Flyers, that 7-0 drubbing by the Capitals, didn’t exactly go as planned, but his attitude hasn’t been an issue at all.

As for Mason… could you really fault anyone (myself included) for not believing that a goalie with a 0.899 save percentage over his last FOUR seasons would be lights out simply with a change of scenery? I thought he could be better, but I wasn’t expecting him to be this good.

Add the fact that I didn’t know how effective (but probably should have seen) Hall has been replacing the Talbot role. Winning faceoffs, killing off penalties. I like Talbot and was sorry to see him go, but Hall is taking his role and the upside of Downie with Coots and Read has made that trade a winner.

Maybe you put him on a team with Rinaldo and he doesn’t need to be that guy?

Numbers are one thing…but they do not often tell what lies beneath the surface. With that being said, anyone would have been a fool to not have doubts about Mason when we traded for him but that was not my point. My point was to the comments we all read when we acquired him.

If you look at his past, there is one thing that really jumps out. In 08-09 his coach was Perry Edlerbloom and he had a pretty good rookie year with 10 shutouts. Then Edlerbloom left and Dave Rook replaced him for the next two years. Mase’s numbers fell off. Then Rook left and he was replaced by Ian Clark and his numbers were even worse over the next (short) season and half…and then he ended up here with another coach, Jeff Reese, and in 7 games he posted numbers even better than his rookie year…small sample yes but to ignore that would have been just as foolish as not having some doubts when he came to Philly.

Now I don’t know if Rook and Clark tried to change things in regards to how Mason played the position compared to Edlerboom but it is probably likely since all coaches have their own philosophies and pet peeves. However, the fact that he changed coaches, twice, and his numbers progressively worsened and then changed again when he came to Philly and the numbers immediately skyrocketed is too coincidental to ignore…and with the same defense that played in front of that other guy who is no longer here.

Sorry…that should be Perry Elderbroom.

I don’t recall what the Flyers gave Columbus to acquire Mason.
I just instinctively assume Holmgren loses every trade now, especially when he receives North American muckers.
i love to rip Couturier but many advised me to be patient he is still young. OPPs maybe I should of heeded their advice. Sean is playing very well lately.

Flyers didn’t give up a ton… just Michael Leighton and a 2015 3rd round pick. But they didn’t really need to give up anything. Columbus was unlikely to re-sign Mason last offseason.

“Coots” turns 21 in a few days. As much as I dislike Pierre Mcguire, the comparison to Bruins forward Patrice Bergeron is pretty apt. Coots probably won’t develop into a 30+ goal scorer, but he can still develop into a 20goal-60 point± player with Selke-worthy two-way ability. Not an easy player to find in free agency for as cheap as he is.

Takes a big man Eagles…. some stability that Lavs never provided him is seeming to pay off. Also putting him on a line with guys that can score. He continues to play well defensively, but if you get 15-20 goals out of him this season with Read’s 25 or so and then Downie pitching in and you have one of the best 3rd lines in hockey.

@bugsy… I don’t see where I was sticking my chest out and saying that I predicted anything. I was just poking the bear a little to see where all the doom prophets were and how they felt now. Apparently…it worked.

I never professed that the Mason and Downie trades would be great…but I also didn’t vehemently profess that they were disaster moves as probably 60 – 70% of the fans did, not only on this board, but other Philly sports boards as well. Voicing concerns is one thing, but I get tired of reading all the doom and gloom, chicken-little sky is falling predictions when a move is made.

I didn’t make any comments on the Mason trade because there was too much beneath the surface as far as his play was concerned to really make a comment. You don’t put up the numbers he did his first year without having alot of talent and why his numbers fell were mostly speculation about this or that or he was just a no talent, lousy net minder…but they still felll nonetheless. Too many grey areas but we seriously needed a change in net and he was cheap. I did, however, post on Downie saying that we needed to take a wait and see approach, which we should really do with every trade, before we start spouting off about disasterous portents to come. The bottom line is, whether a trade involves big names or role players, you never really know how they will react in a new system and new chemistry.

On another note: I agree with you that we have one of the best 3rd lines in hockey and in actuality they are our best line. They are playing as well as, if not better than, alot of 1st lines on other teams. Imagine the possibilities if the Flyers 1st and 2nd lines would start playing like a “normal” NHL 1st and 2nd line…