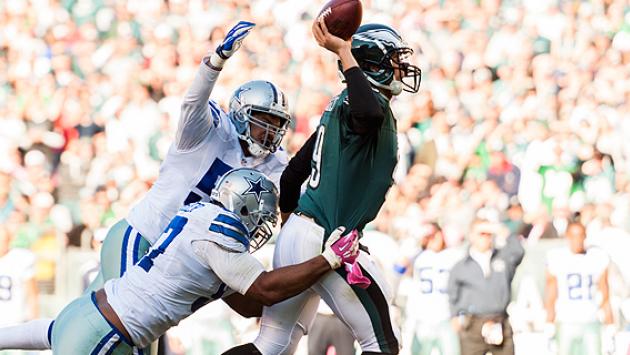 It was Sunday October the 20th, when the Eagles lost that game at Lincoln Financial Field to the Cowboys by the score of 17-3.  The pathetic play of the Eagles offense left some Birds fans traumatized because they couldn’t believe how badly the Birds offense played especially quarterback, Nick Foles.

The offense couldn’t do anything and Foles didn’t play like  the guy we’ve seen excel for all the rest of the season.  He was awful that day, missing wide open receivers, failing to see other wide open receivers and holding on the ball much too long.

In that game, he completed only 11 of 29 pass attempts for 80 yards and zero touchdowns for a 46.2 quarterback rating.  I remember him throwing the ball over the head of tight end Brent Celek, who was totally wide open on the play.   And on possibly Foles’ worst play of the season, he missed a wide open Jason Avant, who was in the end zone and the pass was so bad that it almost wound up being an interception.

Foles was eventually knocked out of the game in the second half after rolling out to his right and holding on the ball for much too long.

On Tuesday, the second-year starter was peppered with questions about his awful performance in that game.

“It’s just something in life that if you try to figure it out it will drive you crazy,” Foles said. “It’s easy to say it’s a bad day. If I look into every meaning, every little thing, everything I did, I would be driving myself crazy.

“Everyone wants an answer, but the answer is we had a bad day. Tough games like that, tough things in life like that, it hurts you. It doesn’t feel good. You feel it in your heart. It’s not fun. But you learn how to get better. You overcome obstacles and you grow together as a team and that’s the beauty of it.”

Foles admitted that although he tried hard to resist it, he hasn’t been able to resist thinking back to that awful game from time to time.

“There is time when you do flash back”, Foles said. “You can’t help it.  I just smile and I thank the good Lord for the opportunity, cause it is crazy after the Dallas game and all the emotions you feel trying to get healthy.  Just for our team to stay together throughout that entire time, when we went on a two-game skid and we weren’t doing very well.  The coaching staff kept us together, everybody in this Nova Care building, [everybody] in this city kept us together   We grew together as a team.  That’s why it’s so special right now we’re playing a meaningful game.  The playoffs start this week for us. If we win this week, we keep going.  If we lose it’s over, so we know what’s on the line.”

For the last couple days, Foles and his teammates have been looking at what happened the first time against Dallas.  They have to look at the tape in order to correct the mistakes which were made.

“I look at it in a critical manner,” Foles said. “I know we’ve grown as a team since then. And I’m going to use it to try to get better. I’m going to look at where we made mistakes, where could we have capitalized where we didn’t.”

“We dropped balls, we weren’t on the same page at times with who to block,” offensive coordinator Pat Shurmur said. “We threw the ball inaccurately at times. We didn’t do a good job coaching and give them the best opportunity to succeed as players. We just weren’t very good. We can’t do that this Sunday.”

Later today, Foles and the Eagles will back on the practice field as they zero in on the total game plan against the Cowboys.  From observing him all year, one of the keys to Foles’s success has been his laser-like focus on executing the game plan that Chip Kelly gives him.  The Eagles second-year quarterback uses the practice time during the week to get focused and relaxed in preparation for the game.

“The most important thing is to relax and play the game”, Foles said earlier in the week.  “We really have to focus this week.  Have a great week of preparation. When you have a great week of preparation, it takes a lot of that pressure off your shoulders.  You know you executed during the week.  You know you’re ready for them and all you have to do is go out there and execute and play the game.”

Chip Kelly emphasizes the importance of repetitions both on the field, as well as mental repetitions in the class room, on the computer screen in the Nova Care Complex and at home.  He wants his players to get to the point where they don’t even have to think about executing the game plan.

“This is why you play the game”, Foles said.  “You play the game for meaningful games at the end of the season to give you team an opportunity to play in the NFL it’s for in the playoffs.”

On a side note, Foles played down the talk that he grew up rooting for the Cowboys.  He squashed that notion on Tuesday, when he talked about being a fan of the Texas Longhorns rather than the Dallas Cowboys.