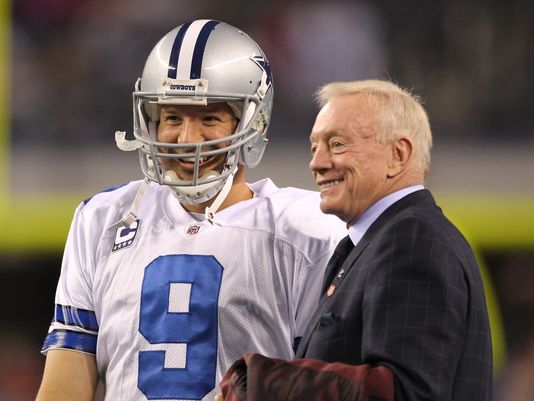 ESPN’s Adam Schefter reported earlier in the week that Dallas Cowboys quarterback Tony Romo is through for the season, but Cowboys head coach Jason Garrett came back and disagreed with that report by saying there was still a chance that Romo could play this Sunday night against the Philadelphia Eagles.

There’s been speculation that Romo has a herniated disc in his back and that he was given an epidoral for the pain.

Now the Cowboys owner Jerry Jones has stepped into the situation and talked about a conversation he had with Romo.

“If you know Tony, you can’t imagine what a competitor he is, and he doesn’t want to miss a snap,” Jones said. “He was very disappointed, particularly disappointed for his team, repeated over and over again, `Jerry, I can’t tell you how badly I feel relative to you and relative to my teammates.'”

It seems that as of right now, Romo has not been given the thumbs up by the Cowboys medical staff to play on playing this Sunday night,  but there is still a chance that could happen.

“Tony will play with all the pain,” Jones said. “But his doctor has to clear him.”

So as of right now, Kyle Orton will be the starting quarterback for the Cowboys this Sunday.  Jones tried to make it seem like they’re just happy to be going with Orton as they were with Romo.

“The main thing is that it’s not like Kyle Orton just gets here this morning or gets here tomorrow morning,” Jones said. “Kyle Orton has been here and he knows this system frankly as well as Romo does. And has practiced it. He just doesn’t have the game time that he would have had as the starter, and he doesn’t get the reps.”

Jone says he feels good about either quarterback being behind center when the ball is kicked off on Sunday night.

“If you don’t realize that you’re going to be dealing with injury information, sudden change in plans, then you’re in the wrong area,” Jones said. “We’re in as good a shape under these circumstances as you could possibly be in. We have planned on this very event.”

LeSean McCoy Wins Award, But His Eyes Are On Playoffs

Christmas Update: Got my Eagles 00 Superbowls jersey from Santa. With my luck I’ll be trading it in for a 01 Superbowls one next year.

I went and brought the family Foles jerseys in honor of my vow that no merchandise would be purchased as long as Reid was the Head Coach.

It’s clear the organization gets it and is heading in the right direction, so I’ll support the team, but if Foles “fold” we will not be buying toilet paper for the month of January for his jersey’s will be cut into convenient squares stacked on the lew to be used for what it’s worth.

LOL…I guess this would need to be classified as a Christmas Miracle.

Songs visited by ghosts of Eagles’ Past, Present, and (clearly) Future last night!!!!!!

You’ll be wearing those proudly Sunday night and again Monday!!!

This might be my favourite Christmas news of the festive season so far!

Songs is the FRAUD OF FRAUDS! Ur not an Eagles fan, beat it. You bring bad vibes to everyone you root for. Please do not root for Foles. Look how it turned out when you rooted for RGIII, Seahawks and 49ers. They all lost,and Griffin tore his knee up. You’re not only a fraud but a jinx as well. Stay away from the Eagles and don’t root for Foles. We’re better off without you. Go root for ROMO, he’s a scrambling, running QB!

Back to the ghost of Christmas past..
Cowboys sign 41 Year Old QB Jon Kinta who will
Be the back-up QB to Kyle Orton if Romo is a scratch
Kinta had been out of Football for 2 Years and gas been Coaching High School Football in Tacoma,Washington (Seattle Suburb)
Don’t be surprised if Orton Plays and Struggles, that the Cowboys would put in Kinta, there is 1 thing that Kinta does well,
And that is throw the long-ball..

Jerry Jones—What a Smacked %$#, I suffered a herniated disc years ago and Tony Romo’s future with the Dallas organization will be in serious jeopardy if he takes the field, Romo will be very limited in his range of motion and when the Eagles” D breaks through ( Which they will), The tugging and twisting as well as the impact from the hit as well as hitting the ground hard will do some real damage to his spine. I am an Eagles’ fan, but this beatdown will be very costly to Romo’s health. Jerry Jones should be under center and QB this team–Hell he interferes everywhere else!

Your absolutely correct igglesfanatik. I too herniated my disc (L5 S1) and that shit was the most painful injury I have ever experienced. He’s risking serious injury if he plays on Sunday. 1 game isn’t worth losing your star QB for next season and possibly for ever. Took 2 cortisone shots just for me to walk up right. I seriously cannot see Romo playing Sunday. And if so, one wrong move or hit could be it for Romo. Not smart

On this day of gifts that won’t be returned under any circumstances I’d like to give a shout out to the best running back in football ,his O line ,the guy who steers the ship #9 …desean who’s balling as nobody else…cooper who rehabilitated himself ,by balling and earning r e s p e c t ,by playing his ass off instead of shooting his mouth off ..kudos to the organizational change in philosophy by taking ertz not for a need ,but because he was the best guy on the board …the defense although ranked 30 th has shown a ton of desire and has reinvented the notion …not wanting to come into the Linc ….and to my coach ,thanks for restoring the pride this great city so richly deserves ….a 3 seed …a home playoff game ….Indeed happy new year….and to all the Scrooges who doubt the guy taking snaps ,hitch your sled to another guy…this ones mine and ours ..true Eagle fans who appreciate what they’ve got ,not always hoping that each week it will blow up ..looked up FRAUD in the dictionary ..it said see S O N G S ….

I couldn’t have said it better desert!

Nice Post Desert…
Not to change gears, but is anyone completely bored with the NBA..
God, I can’t even watch Pro Basketball.. It just lacks Team Ball, Defense
For my liking… Maybe they shoukd go to a 30 Second Shot Clock instead of 24
It just seems to helter Skelter, too many stoppages and just one on one Basjetball too often.. I hate what the NBA has become

The nba is unwatchable….

Listening to Nick Foles and you have to rout for him. He says all the right things. He is like a grown up Opie Taylor from the Andy Griffith show. He is wholesome. His parents did a good job with himl. Saint Nick is the perfect nickname!

I got great Christmas presents…

The Eagles victory over the Bears…

Getting to listen to Andy Reid give his “I gotta do a better job of putting players in a position to win, stump speech.”

I will never get sick of hearing that speech as long as it’s for another team.

Well it looks like Songs is finally seeing what we have all been seeing in Foles. Welcome to the club my friend…welcome…lol

Songs buys Foles jerseys and Vinnie and I are for once on the same page…. what the ????

Merry Christmas guys. Why is it that I try and write my sermon and all I can seem to do is research Eagles Cowboys stuff today?? Ugh….. I need prayer.

There is your sermon Stevo…the miracle of Songs conversion from his conversion last year….lmao. I am enjoying this Christmas season and the Eagles season too much these days too. I will say a prayer that your sermon goes well.