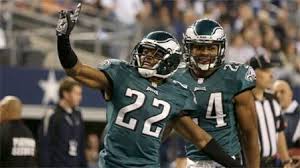 The Colts finished the year 11-5, but they really haven’t been the same since they lost Reggie Wayne to a torn ACL. Yet, they still tore the Chiefs apart several weeks ago when the two got together for a Week 16 match in Arrowhead.

Over the second half of the season, Andy has predictably gone back to his pass happy ways. Alex Smith has had 28 or more attempts in four of his last six games, while Jamaal Charles has had 16 carries or less in four the last six, including only eight in the Week 16 loss to Indy.

Eagles vs. Chiefs. Chip vs Andy. I’d love to see it. Too bad I have serious doubts about the Chiefs even making it out of the first round.

I don’t think the Colts are a great team, but all along I’ve believed that the Chiefs are destined to be a one-and-done team in the playoffs, and I think Luck and the Colts pick up a postseason win.

I’ve loved what Mike McCoy has done with the Chargers all year. San Diego is a team with very little talent, and McCoy did a great job helping get Philip Rivers back on track and squeezing nine wins and a playoff birth from this squad.

However, I think this is the end of the line for them. The Bengals aren’t a great team either, but they’ve been playing some good football over the last couple of weeks going into the playoffs, whereas San Diego kind of snuck in thanks to the remaining pack of playoff hopefuls in the AFC being nothing short of woeful.

Its time for Andy Dalton and A.J. Green to win a playoff game, and I think the Chargers are longshots at best to upset them on the road.

A rematch of a playoff game from last year, each of these teams have been rounding into shape after finally getting healthy over the last few weeks.

Aaron Rodgers is back for Green Bay, and his presence was felt immediately after helping his team to a comeback win over the Bears to secure a playoff spot.

Colin Kapernick has played most the year without his top receivers, but Michael Crabtree and Mario Manningham are finally back, and they’ve helped open things up for Kaepernick once again.

The San Francisco defense gives them the edge here. Rodgers played well last week, but after missing so much time he’s still not in top form yet, and the Green Bay defense is a major problem themselves after having allowed Kaepernick to throw for over 400 yards and three scores against them in Week 1.

The Saints are a very tough draw for the Eagles in the first round.

This is a veteran team with an A-list quarterback that has plenty of playoff experience and a lot of their players even have a Super Bowl title under their belts.

However, the Eagles have one serious edge over the Saints that can’t be discounted: they’re the hot team right now. How many years in the NFL have we seen the team that comes together at the right time go on a run and take down teams with better talent? Right now, you could certainly make a case that the Eagles could be that team this year.

They finished the year with a decimation of a Chicago team that had playoff aspirations, and they went on the road and won a hard-fought battle for the division with Dallas with a number of key plays in big moments.

I don’t know how far this team is going to be able to go in the playoffs, but I don’t believe that this is going to be a one-and-done ride. Chip Kelly has made a believer out of me with his creative play designs, week to week adjustments, and the confident attitude he’s brought to the team. Billy Davis has made a believer out of me with the dramatic improvement that his defense has shown in the second half, and the role they’ve played in winning close games.