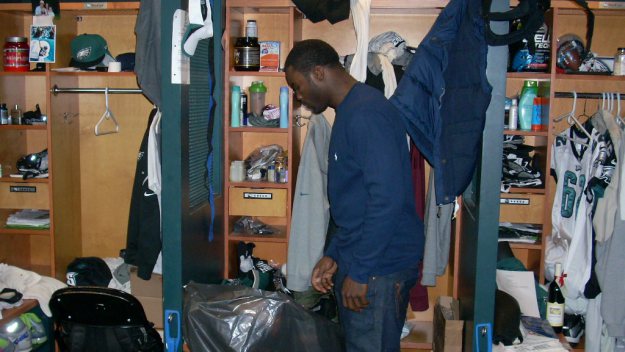 The Eagles cleaned their lockers out yesterday and it will probably be the last time Michael Vick cleans out his locker in the Nova Care Complex.  Nick Foles is the starting quarterback here and Vick is probably going to test the free agent market this offseason.

Chip Kelly and the Eagles franchise appreciated the way Michael Vick showed tremendous leadership and unselfishness during the Birds season.  Vick stepped up during the Riley Cooper controversy, kept the team together and used it to make the players closer to one another.

He handled it with class and was the first to say publicly Foles should be the starter because of the amazing way he was playing.  Kelly let everybody know he appreciated the way Vick handled things.

“I love Michael Vick. That guy’s awesome,” Kelly said via the South Jersey Courier Post. “Unfortunately, he got hurt, and that gave an opportunity to another guy. It’s not like Michael got benched. How he handled it, how he helped Nick through the process, it indicates the kind of person he is. That didn’t go unnoticed.”

Although Vick appreciates the positives, he still considers himself a starter.

“My desire is to start,” Vick said via Phillymag.com. “I’m 33, I still feel good, and the way I’ve been able to take care of my body this year, the things that I’ve learned from, the nutrition aspect of everything, really has given me another jumpstart. I feel good, I still know I can play and I’m just confident in what I can do based on what I do every day.

“I feel like I’m built to do this, and just want to continue to keep it going. I’m not finished.”

I think Vick is right, he’s still capable of winning a starting quarterback job in the NFL, but it’s probably going to be an incentive-laden type of deal.  The veteran lefthander still hasn’t been able to find a way to stay healthy.  Who knows he might have learned something from spending the second-half of the season on the bench watching Foles.

Like I always said concerning Vick, he needs to be more Clark Kent and less Superman.

The Michael Vick that I have seen play for the Philadelphia Eagles for four years is a tremendous person.  You find out about people when you see the way they treat people behind the scenes.  Yes, Michael Vick made some mistakes in his past, but Michael Vick is a good person.

Five Flyers Headed to the Olympics Without Giroux

G I too appreciate what he gave while here. I’ll take your word for how great a person he is. Never felt the need as a fan to have someone prove how great they were or how much they’ve grown. Entirely too much to worry about with my own personal growth. Nevertheless, good luck moving forward Mike.

1) Cincinnati Bengals who are built to Win now nad QB Dalton seems unable to get them over the hump.. HC Marv Lewis has a history of accepting Players with a checkered past.. He could be a real good fit for their present Team with Great Weapons on the outside, a good Running game with a Good Defense.. I would not be surprised to see him land in Cincinnati

2) TB Bucs – New HC Lovie Smith is a real Fan of Mike Vick, he also has a history of preferring a Veteran QB over a Youngster (Mike Glennon) Vick could come in and win job from Glennon relatively easily and again enjoy some weapons with Viincent Jackson, Doug Martin to make an impact and at least get the Bucs to being a competitive Team and their Fan Base excited again …

3) Minnesota Vikings — This Depends mostly on who the next HC is and what his Philosophy is but having WR’s Jennings/Patterson,,TE Rudolph and RB AP, the VIkings Offense should be a lot more dynamic that it’s been the last 2 Years with the QB’s that have played for them
4) Tennesee Titans — Again Depends on who the next HC is .. but looking at the AFC South with Jaguars,Texans rebuilding, a few pieces here and there for the Titans again can make them competitive…

Either direction he goes, I wish him the best .. I still think he will eventually end up working for the NFL as a Spokesman for Young Players who have had off the field issues and trying to transition into the NFL as a Pro and would be an excellent conduit/mentor between the Players, the Players Association and the NFL and could be a real Leader in this Area with his visibility, charisma and overall popularity with the Players,the NFl and may fans and the Media…

Doubt Lovie Smith aligns himself with a veteran QB to start a tenure. He would surely want someone younger to move forward with together.

What about the Jets? Joining up with MM. Would help light a fire under Geno and is probably someone who would tickles Rex Ryans fancy…

That is the best photograph of Ron Mexico since he came to the Eagles. Good riddance loser, get the hell out of here clown.

Decker? Worst WR hands in the NFL. Only looks decent because of his supporting cast.

Chip like big people and I don’t see him dropping to many passes so with him Maclin cooper this they would be way bigger chip has to come up with ways to get djack off of bump and run coverage with these three you don’t have to do that.

I dont know about the season just gone, but in 2012 he lead the league in drops.

oh wait it was Demariyus Thomas who ended up near the top. Regardless, Decker still rated one of the worst.

Remember that feeling you had when Riley dropped the 3rd and 4 pass in the Saints game? That’s Decker all season.

Don’t let the facts get in the way, of a bad story, mim! You do know, that reception vs. target ratio, doesn’t mean dropped passes, right? You are clueless, if you are comparing that stat, & not actual dropped passes? He dropped 7 this year, & is ranked 25th. Thomas dropped 8 & is ranked 10th. In 2012 he dropped 8, & DT dropped 10. The stat I find pretty cool though, is none of the Birds had more than 3 drops this year, which is surprising! Celek, Cooper & DJax, all had 3 drops.

Ciao! Arrivederci! Addio! Adios! Hasta la vista! Despedida! Adeus! Adieu! Auf Wiedersehen! Do svidaniya! Sayōnara! Aloha! Don’t let the door hit you in the @$$!!!! Enough, is enough! I can’t take another minute of the race riots on here, from all sides! Start anew, & move on, I don’t give a f^#@ if they suit up 75 YO Norm Snead!

I respect what kind of person Vick re-made himself into, & how he’s handled himself, since being here, but he is, was & always will be an overhyped, overrated, injury, & TO prone QB, that is not very good. Period! Nothing less, nothing more!

Some players simply cant stay healthy…and this was Mike Vick’s biggest problem. When he beat Foles for the job in training camp, he was poised to have a big year in Chip Kelly’s system especially with the improvement of the defense…he was playing very well…but he got hurt…again!
Good luck Vick as you move on…I think we will have a Qb if not this year next year who will mirror your skill set…yet stay healthy…and when we do get a QB like that…we will be ready to contend for a championship!