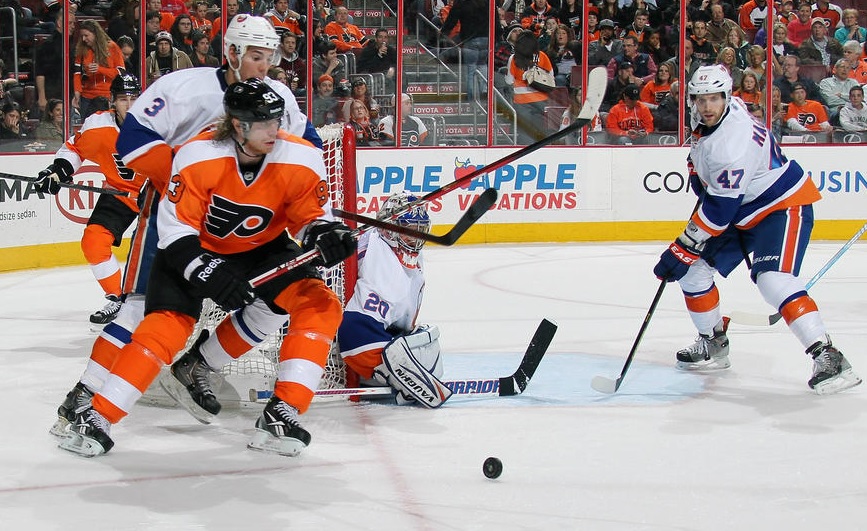 The deal has been met with mixed reactions from Flyers fans and media alike.

It has been argued for months that while the Flyers’ blue line has been serviceable when the team commits to defense as a group, the individual defensemen comprise predominantly 4th/5th defensemen- that is, players who are perfectly fine in a second or third pairing role but do not fare as well when expected to take on greater responsibilities.

The team also has three puck moving defensemen on the roster with varying long-term concerns.

Erik Gustafsson is a young, quick defenseman, but hasn’t been able to crack the roster full-time while head coach Craig Berube bounces between “Gus” and Andrej Meszaros. He inexplicably sees significant ice time in the limited games he plays, but there aren’t many expectations for him to serve as more than a third pairing defensemen.

Mark Streit steadily improved as the season wore on, but he is 36 years old and on the decline of his career.

Kimmo Timonen remains the best player on defense, but at 38 years old, he also can’t be expected to anchor the blue line as a #1 defenseman forever.

It would be ideal for the Flyers to have addressed these concerns with the acquisition of a young, puck moving defenseman. What they have acquired instead is another talented 4th/5th defenseman that is excellent at blocking shots, in the vein of Nicklas Grossmann and Luke Schenn.

By itself, the trade isn’t that bad. The Flyers sent along two draft picks for a 27-year-old defenseman that has averaged more than 23:20 of ice time in each of the last four seasons.

His possession numbers have not been particularly good in the last few years, but it’s worth noting that he has taken on #1 defensive responsibilities in each of those seasons. As I noted a few weeks ago, it’s fairly typical for defensemen used in the situations he’s been used in to see a ton of shots against. Playing against the Crosbys and Ovechkins of the league will do that.

MacDonald’s best possession numbers came in the 2009-10 NHL season, when he was primarily used with Mark Streit as a 1st/2nd pairing defenseman. If MacDonald bumps Nicklas Grossmann down to 3rd pairing (and sees slightly easier competition as a result), he is arguably a good upgrade at the 2nd pairing defenseman roster position.

Here’s where the trade becomes questionable.

Right now, the Flyers have nine defensemen on the roster. It is very, very unlikely that they are going to continue the season with this many defensemen. They also do not need all of Schenn, Grossmann and MacDonald on the roster. There’s too much redundancy in this group with none of them being ideal top pairing defensemen to keep all of them.

Grossmann and Schenn, playing the same role, currently earn $3.5million and $3.6-million, respectively. Understanding how the Flyers have approached these situations in the past, it isn’t out of the question for them to meet MacDonald’s demands and then some come the offseason.

We can’t fully evaluate this trade then until after Wednesday’s 2:00 p.m. trade deadline. If the Flyers move one of these players or, say, Meszaros for a 2nd round pick elsewhere, then the net value of the moves isn’t all that bad.

The other factor that indirectly affects the evaluation of this trade is the trade market around the league today.

The Chicago Blackhawks acquired defenseman David Rundblad, 23, from the Phoenix Coyotes for a 2nd round pick. Rundblad currently makes $785,000 and will be a restricted free agent defenseman after the 2014-15 NHL season.

Rundblad is a young, puck-moving defenseman with very good second pairing potential and a generally unknown talent ceiling at the NHL level.

The Flyers aren’t the only team that apparently dropped the ball here, but Rundblad would have been an excellent pick-up for the Flyers at a surprisingly low cost to actually fill their long-term needs.

The Blackhawks obviously know a thing or two about winning Stanley Cups in the modern NHL. It is a bit disconcerting to see them continue to make very intelligent moves to continuously stack their rosters while the Flyers appear to be limited to the type of defensemen they’re willing to dress on a nightly basis, but as mentioned before, we’ll have to see how the next 18 hours play out before full understanding the implications of today’s trade.

MacDonald will wear #47 for the Flyers.

Were The Eagles Right To Release Jason Avant?

Notes From The Phillies’ 5-3 Loss To Toronto

not really sure what homer has up his sleeve but i suspect he will give either grossman or mezaros away on the cheap tomorrow and recoup a couple picks. dont think schenn is going anywhere as he is the only right shooting dman. not sure homer can pull off improving on the current top 9 forwards without being to disruptive. this team is good but dont think they are anymore than 2 rounds into the playoffs good.

Washington/ Flyers games have been entertaining since that 7-0 beatdown turned brawl when Emery beat up Holtby and Lecavier broke his jaw.
Total cheap shot by Orlov boarding B Scheen, he deserved the 2 game suspension. What a comeback Sunday fueled by that 5 minute major.

Meszaros has been available for free all year – Grossmann is another guy no one wants with that contract.
Adding MacDonald is a plus he is better than what they have.

Not much better if he is better Eagles. This move does nothing for me and just further proves that their is no plan for this team.

This team has a lot of young centers with Laughton waiting in the wings. That being said, it seems like guys are constantly out of position. This is what makes the Vinny signing worse and worse. Now these guys can’t develop and they languish on 3rd or 4th lines or out of position which stunts their growth potential. Some decisions need to be made. Who are they committed to long term and who can they move. They need a stone cold killer on the wing beside Giroux and I am not sure that Voracek is that guy, but I guess that he is ok at that spot. They need some puck handling defensemen. Can they use Schenn, Coots or Laughton to get those players?

Holmgren is just like Amaro. He has no plan or vision for this team. They both need to go.

And I would have loved Rundbland.

I’ll be able to add more on this later, but Meszaros has been dealt to Boston for their 2014 3rd round pick. That frees up their cap space issues again and at least brings back a 3rd round pick sent to the Islanders.

I still think the Flyers make a move for Kesler in the offseason. It sounds like VAN management was willing to move him, but ownership wanted to keep him for now to help Canucks make postseason (earning playoff $$). Most teams hosting the draft these days tend to make a big splash as it is…

flyers did as expected, i think it was best to keep these guys together and make necessary changes in the off season. see if these young guys can do it and if not make changes accordingly. I think MacDonald will be a step up defensively and a wash offensively. Overall it cost a 2nd round pick to get MacDonald and say bye to Meszaros. Meszaros will have a decent shot at the cup, Flyers if they make it will have a chance at 1 maybe 2 rounds

1 & done. Enough said. Homer must go. He’s neck, & neck with Ruin 2morrow as the worst in the cities history.

This defense are built with offensively talent-less mastodons, that are slow, & mistake prone. On top of that, our forwards have too many centers, playing out of position, who are just as slow as the defense. 1 & done, & things won’t change until Snyder croaks, or relinquishes the franchise.

That is solid work right there.

****Flyers News****
Owner in talks to sell the Flyers Franchise
To a Ownership Group led by Milton & John Street & Bill Cosby
Should be interesting to what happens next to the Flyboys..