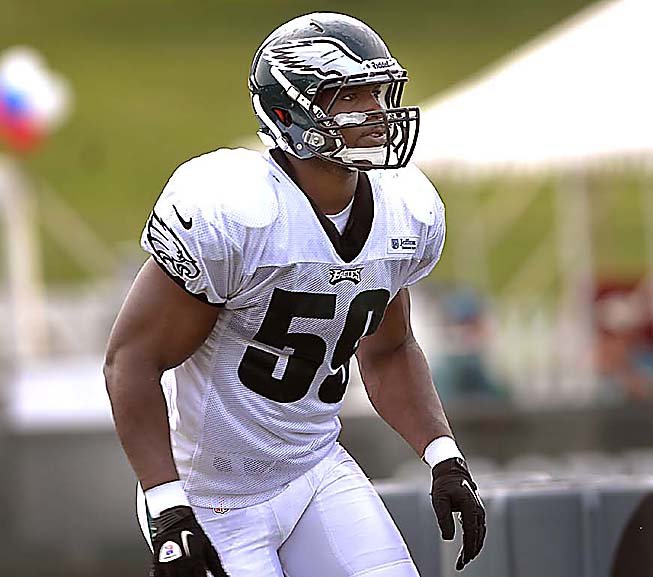 When the Eagles acquired DeMeco Ryans before the 2012 season, they thought they were getting a force in the middle of their defense. Ryans was expected to not only be the long-awaited answer for the team’s middle linebacker woes, but was also supposed to emerge as one of the team’s leaders and infuse some new fire in the defense.

In 2012, Ryans was a bit of a disappointment, but in 2013 the former Texan stepped up and became the heart and soul of the Eagles’ new defense.

Ryans 127 tackles, including 102 solo stops, a notable increase from the 86 solo tackles he had in 2012. DeMeco also had a career-high four sacks, defended seven passes, and intercepted two.

Ryans was arguably the most complete player the defense had, and guys around him fed off of the energy that he brought every week.

The Eagles finally have an answer in the middle of their defense. Ryans still has a couple of years of strong play left in him, and even though there’s been some talk about the team wanting to restructure his deal, the veteran is playing too well and means too much to the success of the defense for the Eagles to seriously consider letting him go.

Kendricks went through some growing pains during his sophomore season, with some a lot of good and bad moments along the way.

There were times where Kendricks’ raw athletic talent

Kendricks notched 106 tackles, with 81 solo (up from 75 total and 51 solo in 2012) and picked up four sacks and three interceptions. He had some stellar games against Washington, New York, and Dallas, where he combined for 34 tackles over those three contests.

The downside was that Kendricks still made a lot of mistakes. He struggled in coverage, overran too many plays, and showed that he’s a still young player getting a feel for the NFL.

While Kendricks wasn’t perfect, he’s still very young and the fact that he still gave the defense a good amount of big plays along the way bodes well for his future. Another year to grow with his teammates after having another off-season to settle into the system could help the former second-round pick take another step forward and reach his potential.

Barwin turned out to be one of the team’s best free-agent additions, and brought a lot to the table in his first year in Philadelphia.

While Barwin’s numbers aren’t spectacular in any one category (59 tackles, five sacks, one forced fumble, one interception), when you watch the guy play each week, you can tell he’s a guy that plays hard and always puts out a strong effort.

Barwin is the type of player that will grind things out and do a lot of dirty work. He’s a smart guy who is rarely out of position. Throughout the year, you could see the former Texan battling in the trenches, and while he wasn’t always able to get to the quarterback, he’d do a great job of keeping his hands up and active, and it helped him bat down quite a few passes at the line of scrimmage.

Barwin’s versatility allows him to contribute in different ways, and it wioll be interesting to see what Billy Davis does to improve his production in his second season.

You’ve got to give Trent Cole a lot of respect.

Few people had confidence that Cole would be able to transition to a 3-4 linebacker at this stage of his career and not be a liability, but the veteran surpassed everyone’s expectations by holding his own at the position.

Cole grew into the role as the year went on, and finished with eight sacks to lead the team. The most remarkable thing about this is that he didn’t pick up his first sack until Week 8.

During the second half of the season, Cole had three multi-sack games, including a three-sack effort against the Chicago Bears.

The former fifth-round pick rounded out a solid linebacking corp. However, his position is still one that the Eagles need to look to upgrade.

There were already concerns about Cole’s age, and at 31 (soon to be 32), its always a concern that Father Time will be catching up to an athlete sooner rather than later. The Eagles also need a better pass rush from the outside linebackers, and while Cole’s sack total in the second half of the year was decent, the team can’t ignore that Cole failed to register a sack in 12 regular season games.

All bark and no bite.

Four years since being selected over Earl Thomas with the 13th overall pick, Brandon Graham has done absolutely nothing to justify his first-round status.

At least once a year, we always see a story come out about how Graham says he is ready to “erupt” and that all of the negativity he hears is “motivation” or “fuel to the fire”. And sure enough, once gameday comes around, Mr. Graham is predictably invisible. Sure, you may see him on the field every now and then. But he’s most likely getting pushed around by opposing offensive lineman and failing to get off of blocks.

2013 was Graham’s last shot to become a factor on this defense, and he failed. He was supposed to be a serious competitor for a starting job with Trent Cole, but Graham couldn’t even push Cole for the job, let alone beat him out.

Graham did have one decent game this year, recording two sacks in the win against the Cardinals and their weak offensive line. But that was all the production the Eagles got from their 2010 first-round pick.

Graham may be back to play out the final year of his contract if the Eagles can’t add better talent to increase their depth at the position, but at this point the organization knows what they’re getting from him, and it isn’t much.

Speaking of the wonderful 2010 draft, we have another disappointment from that draft that is remarkably still residing on the roster four years later.

Casey Matthews was on the bubble during Training Camp, and showed very little. He had a decent performance in the team’s first game against the Panthers, but was clearly outplayed by Chris McCoy and Emmanuel Acho. However, Matthews miraculously survived the final cut, and remained on the roster through the full season. He played almost exclusively on special teams, and made minimal contributions.

The Eagles can do better than Matthews. If he makes the team again, something has gone wrong.

Najee Goode is the one reserve linebacker the Eagles have that I actually like a little bit.

Primarily a contributor on special teams, Goode got a start for Mychal Kendricks late in the season against the Washington Redskins and played pretty well, picking up five tackles and a sack.

With the lack of depth at the position, Goode made some nice impressions last year and should have as good a chance as any of the linebackers to remain with the team.

Acho bounced on and off the roster throughout the year.

He flashed quite a bit in the preseason, and he could have arguably made the roster over Casey Matthews.

I’d like to see the Eagles give Acho a much longer look next year, and consider giving him the nod above the likes of Brandon Graham or Matthews.

Hunt spent the year on injured reserve, and will get another chance to show what he can do next summer.

He’s flashed some great pass rushing potential in the past, but he’s probably not an ideal fit the for 3-4.

However, if Trent Cole and Vinny Curry could adapt their games and become productive in this defense, there’s always the chance that Hunt could do the same.

The Eagles starting linebackers surpassed expectations and developed into a solid group.

While pass rushing needs to be upgraded, I believe its just as important for the team to make it a priority to upgrade the depth at this position.

Beyond the starting four, the Eagles really don’t have much talent at all on the bench. Najee Goode looks like he might have a chance to be something decent, but after four years of waiting its pretty clear that Brandon Graham and Casey Matthews aren’t going to be anything special in this league. Those two need to be upgraded, and the Eagles need to bring in some good young talent to develop behind DeMeco Ryans and Trent Cole.

Notes From The Sixers’ 125-92 Loss To Oklahoma City